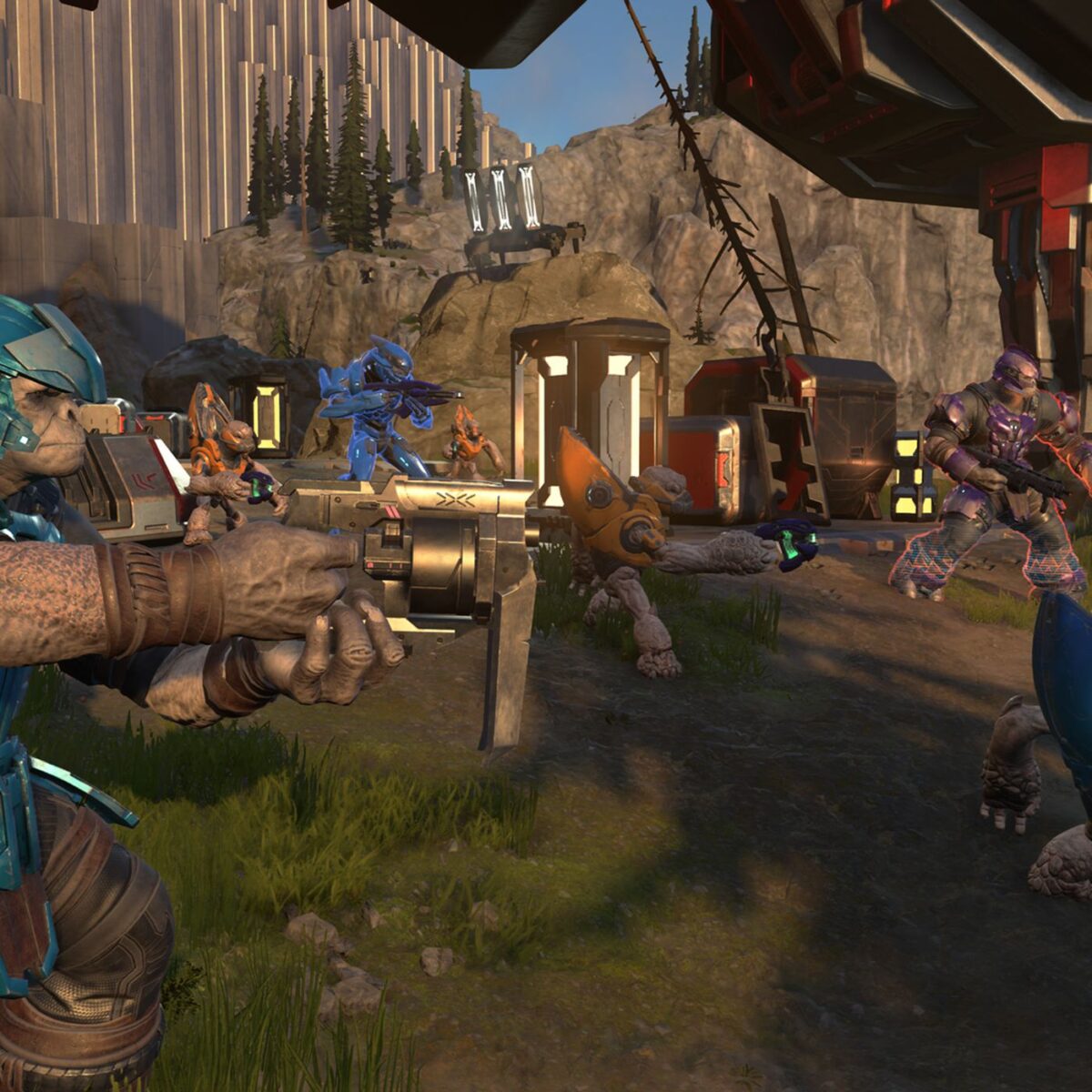 Microsoft had its big First Party Games reveal yesterday, and opinions regarding how effective the presentation was in illustrating the next generation games, and more importantly the Xbox Series X, have been mixed.

The presentation started with 343 Industries 3rd crack at the Halo franchise with the much anticipated Halo Infinite. The good news is that the game captures the old Halo atmosphere perfectly, and 343 learned its lesson ( of not placing players as another lead character that is not the Chief) and the game seems to be John-117 oriented.

The story, as Halo fan, captured me from the get-go. The battles are bigger, and the world within the ring seems to be “open” which should bring us back to the Bungie days of large scale campaign levels, while leaving behind the corridor level design of Halo 4 and Halo 5. Master Chief also has an array of new skills, and features, such as a grappling hook.

“This ( Halo Infinite) is the most ambitious campaign that we have ever created at 343. For the first time players will have the freedom to explore a mysterious new Halo ring that is several times larger than our last two Halo games combined. Halo Infinite has been built from the ground up to take full advantage of the Xbox Series X. Bigger battles, epic vistas, more complex visual effects displayed with ten times the processing power per pixel of Halo 5” -Chris Lee, Studio Head Halo Infinite, 343 Industries

Microsoft claims the game was running on Xbox Series S, which again; I do not doubt, but I saw “Pop up” in a few areas of the gameplay trailer. The SSD has been touted as the key to ending such things from happening in Next Gen hardware. Halo Infinite clearly suffers from current gen issues, and it is not the visual magnum opus that Microsoft needs to sell Xbox Series X consoles at launch.

Still, This is the most excited that I have been about a Halo game since Reach, if 343 Industries can deliver a Bungie level of quality campaign, graphics will not matter much when the game arrives at stores on this Holiday season. As far as true Halo fans are concerned, they have something to look forward to on the holidays.

As it stands, Halo Infinite is a good-looking Xbox One game, that has resolution and perhaps performance optimizations for the Series X. To be fair the game was running at 1080p on the presentation that we witnessed. Perhaps, 4K will make a giant difference when the Series X launches, but I was not impressed by the pop up, and the current generation assets shown.

The visually underwhelming Halo Infinite trailer was followed by a visual impressive State of Decay 3 trailer, that looked next gen. The trailer rivaled what we have seen from Naughty Dog in The Last of Us 2 (not quite as good facial animation, but incredible detail on the environments), and seemed like a perfect visual showcase for the new system, even though we didn’t get to see any actual gameplay.

Considering the power of the Series X hardware in contrast to current consoles, I must assume that the final game will likely resemble the trailer that we saw when it is released. An interesting note is that at the end of the trailer there is no mention of the Xbox One, instead it only shows Xbox Series X, and Windows PC as the supported platforms, which could explain why State of Decay does look “Next Gen”.

The new Forza Motorsport was shown in full Xbox Series X glory, with the implementation of Ray Tracing, and it looks just as mind blowing as the new Gran Turismo game looks for the PlayStation 5. Microsoft, once again, has a winner with its premier racer.

The only disappointing thing about this trailer is that while it was rendered with the “in game” engine, no gameplay footage was shown, so Sony has the upper hand as GT did show gameplay footage.

It is early however, and perhaps in the upcoming months we will have some more footage of the game before the Xbox Series X Launches.

Forza Motor Sport also appears to be an Xbox Series X exclusive, so no Xbox One version.

Rare Strikes Again With a Breath of Wild Inspired Game

One thing that I will never do, is doubt Rare’s credentials when it comes to delivering amazing looking games. Their 360 Banjo Nuts and Bolts, still looks better than any platformer we have seen on the Nintendo Switch, even though Rare was working on inferior hardware.

So, it is not surprising that Everwild (could the Zelda references be more obvious?), completely smashed The Legend of Zelda: Breath of the Wild at its own visual style. The game looks fantastic, almost like it was taken out of a dream. We will have to wait for more details to see if the game plays as well as it looks, but that was the first trailer in the presentation that truly captured my interest on the next gen console.

Everwild, also seems to be an Xbox Series X exclusive.

“Everwild will give to you a magical and untamed natural world for you to explore, and to just truly lose yourself in.”-Louise O’Connor, executive producer, Everwild.

Now. this seems to be a drama driven title, and it was one of the less impressive looking games of the trailer, even old PS4 games like The Order, and Uncharted 4 look worlds better than what as shown here.

The answer to the pedestrian animation, and overall look in the trailer lies in the fact that this game is an Xbox One game that will be “enhanced” on Series X.  Chapter one will be available on August 27, so the footage that we saw on the trailer was probably running on Xbox One X hardware. Even for an Xbox One game, Tell Me Why does not impress in terms of looks.

Gennadiy Korol Co-Founder and Director of technology, Moon Studios followed the presentation, stressing the importance of the power of the Xbox Series X, as their an enhanced version of Ori will run at 120 frames per second in full 4K, HDR mode on the system. The stats are impressive, but Ori is a 2-D platformer, so if any game on Series X could hit the 120 fps mark it would be Ori.

Microsoft showed a collection of diverse, and underwhelming games. Most trailers showed non gameplay videos, and others showed gameplay but, we were watching pedestrian Xbox One games that will be Series X Enhanced.

The Medium once again, showed an impressive dramatic trailer, it seems that the game remains a Series X exclusive. Stalker 2 was the one of the most impressive showcase trailers, but it was also a CG vid of sorts, and we don’t really know how the end product will look.

Sega’s Phantasy Star Online 2 Showcased an impressive gigantic world with real time gameplay, but at the same time it wasn’t anything that one would consider “Next Gen” in terms of visual fidelity.

Obsidian teased Avowed, an epic RPG in the vein of the Elder Scrolls, which looked very promising, as far as its premise went. Again, there was no gameplay shown either.

Sony Continues to Win the Next Gen Hype Machine

In all honestly, Sony’s showcase was more impressive. It showed game footage, and gameplay of 4 of its AAA PS5 games Horizon Forbidden West being the most impressive looking Next Gen game so far. There were positives for Microsoft though, their commitment to signing studios has paid off in the quantity of games that they had to showcase, and there are a few promising titles in the lineup.

That said, many of these studios showed games that run on current Xbox Ones and will be enhanced later Series X. It wasn’t a pure next gen showcase, and that disappointed many a gamer on the web. The other problem the company has, is that many of the studios that it signed do not seem to have the talent to rival Sony’s first party teams, as many of the games do not look better (many look much simpler) than many third party games that are already available on the Xbox One.  When it is all said and done, Gears 5 on Xbox One X, looks better than any game that showed actual gameplay during yesterday’s presentation.

Microsoft has the most powerful next gen machine, but so far it has no games to show that look better than Sony’s line of AAA PS5 titles.

The One That Stole The Show

The Fable Reboot. The game showed no gameplay or any in game engine scenes, the CG presentation was enough to get people talking. Microsoft needs something to Rival Sony’s growing lineup of open world franchises and Rare’s Everwild coupled with the Fable reboot more than perfectly fill that need.

Developed by Playground Games (Forza Horizon), I have no doubt that Fable will be the one game to really showcase the power of the Series X. The problem that Microsoft has, is that the game is probably in the early stages of development, and Horizon Forbidden West seems to be quite further along its own developmental timetable.

Still, the Fable reboot, Stalker 2, and Avowed showed that Microsoft does have some potential next-gen show stoppers, the problem is that it is likely we won’t see any of those games until 2022 at the earliest. Two years is a long time to give away to Sony. Microsoft is likely to find itself in the same position it did with the Xbox One, with Sony taking an early and uncatchable lead.

Perception is everything and going on online forums last night seems that there is an overwhelming sentiment that the PS5 has made the better impression so far, as far as games are concerned.

Microsoft needs to scramble and divert funding to Playground Games to see if they can get something more tangible to show of the Fable reboot over the next month. They are losing the marketing war to Sony at this point.