We are in the final months before the release of new Sony and Microsoft machines, and even Nintendo is rumored to be launching a new Switch next year. So, it is likely  that the latest sales numbers (and estimates) are probably close to what the final tally for this generation will be for at least Sony and Microsoft.

The numbers are telling, the company bounced back in a big way from its rough PlayStation 3 generation days, where Sony literally went neck and neck with Microsoft after a very rough start in 2006.

The PlayStation 4, has been for Sony, its second biggest success behind the company’s PlayStation 2 sales. The PlayStation 2, had a six year lifecycle and yet managed to sale 157 million units, that number will be hard to match by the PS4, which in the best case Scenario might reach 118-120 million units sold by the time that the console is complete phased out of the market.

The above chart only tracks down the sales up to March 2020, afterwards, the industry aided by the COVID-19 Pandemic’s aftermath, experienced a high level of growth in both, hardware, and software sales.

The chart below  was built utilizing data from VgChartz.com. Their tracking, while not necessarily exact, is usually within the actual range of sales figures released by the hardware manufacturers. 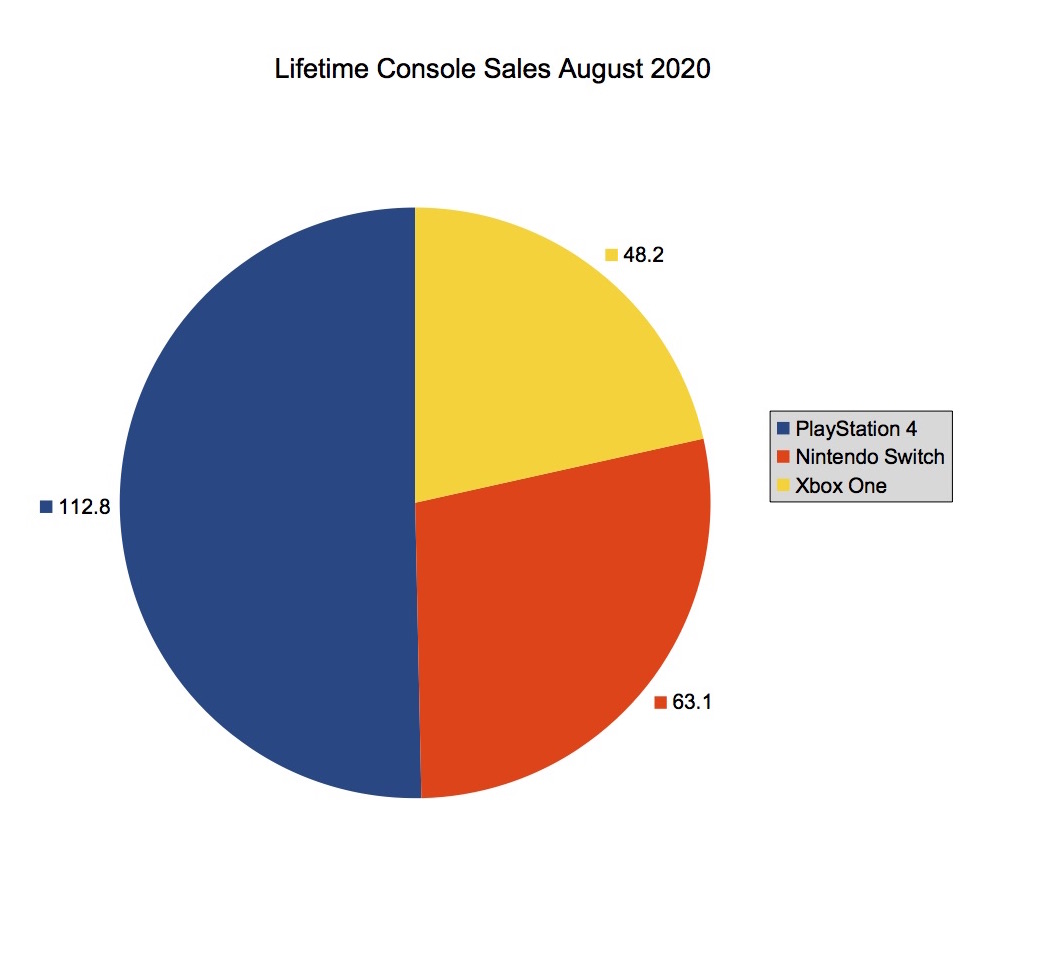 The growth experienced during the 2nd quarter of 2020 is encouraging to both Nintendo and Sony. Nintendo sold a staggering 7.3 million Switch units during that period, while Sony’s 7 year old PS4 managed to move about 2.4 million units.

Sony’s number is fantastic considering the age of the PS4, and the fact that we are mere months away from from the PS5 launching world wide. Microsoft however, is in a bit of a bind if current trends carry over to the next generation.

During that same period of time Microsoft only managed to move 400,000 units. The PS4 sold around six times the number that Microsoft did with its Xbox One.

That sales rate should worry Microsoft executives, especially because part of their marketing campaign has focused on the importance that the current Xbox One will have for at least the first few years of the next generation, as the system will get versions of “next gen” Xbox Series X games.

The Xbox One S, is quite affordable and boasts a 4K UHD drive, and the ability to stream media in 4K. It is a great budget machine for those looking to enjoy Xbox Game Pass, and 4K media. The system can be found at some retailers for less than $299, and yet, it is not selling. In fact, sales (on a week by week basis) have been gradually decreasing over the last few months.

Is this a warning of things to come for the Xbox Series X? In my opinion; yes. Halo Infinite being delayed won’t help matters either, but the trend suggests that consumers are willing to part with $299 for a system that will be replaced on the Holidays when it comes to the PlayStation brand, but they are not willing to do the same for a system that potentially still has two years of life left in the Xbox One S.

Clearly, Microsoft’s first party lineup, and Xbox Game Pass service are not attracting customers to its hardware, even when its hardware offers greater ‘future proof’ value to them than its competition.

Coming out of the PS2 generation there were many bright spots the Xbox brand, the OG Xbox had been the preferred first person shooting console, and the genre was booming then. The OG Xbox also had built an outstanding reputation by offering many great first party and exclusive gaming experiences, and Sony had given the company a one year head start (Apart from how Pricey the PS3 was at launch).

The Xbox Series X will not share many of the same advantages that the Xbox 360 had at the beginning  of the previous generation. For starters, Microsoft has done a poor job on first party and exclusive content on this generation, apart from Forza, both the Halo Series, and even Gears of War have suffered from a decline in popularity (and some will say quality) when contrasted to their 360 days.

Microsoft neglected other properties like Fable, and while a new reboot has been announced, that game’s launch seems distant (no earlier than 2022) enough, that it won’t arrive in time to keep the Xbox Series X from falling behind the PS5, much in the way that the Xbox One fell behind the PS4 in 2013-2015.

The Xbox Series X holds a GPU advantage over the PS5, but without first party showcases to clearly demonstrate this, the Series X might suffer the same fate that the Xbox One X did when faced with the PS4 Pro (and to a lesser degree the base PS4).

The Xbox One X, was clearly the better machine, and third party games ran better and at higher resolutions on the system, but no one really cared when Sony’s first party Studios were pumping out games like God of War, Horizon Zero Dawn, The Last of Us 2, and Ghost of Tsushima among others. Those games looked better than anything running on the Xbox One X (save for a few exceptions), but at lower resolutions.

The perception going into the next generation, so far, is that Sony still holds a massive advantage in terms of exclusive titles, and that while Microsoft might have the better console, and monthly game service, it is not enough to warrant an Xbox Series X purchase at launch.

With Halo Infinite being delayed, and nothing else really on play for the system’s near future at this point, Microsoft is facing an up hill battle with the Xbox Series X.

My prediction is that Sony is likely to succeed by the margin that most analysts are predicting (2 to 1 sales ratio) during the next generation unless Microsoft, and its first party studios can cough up an extraordinary lineup of titles over the next 4 years.

In this business perception is everything. The PS2 murdered the Dreamcast based on its “Hype” alone before Sony ever had a single unit on a store shelve. Sony  is on its way to doing something similar to Microsoft at this point (in terms of Console sales), and one has to wonder how successful Xbox Game Pass (both in its console and xCloud forms) can be if the “Xbox brand” is struggling badly while trying to sell its hardware.

Microsoft has the best games service, and best back compatibility system around, but it will do the Series X little good if the company can’t put forth first party software that can attract people to the console first.