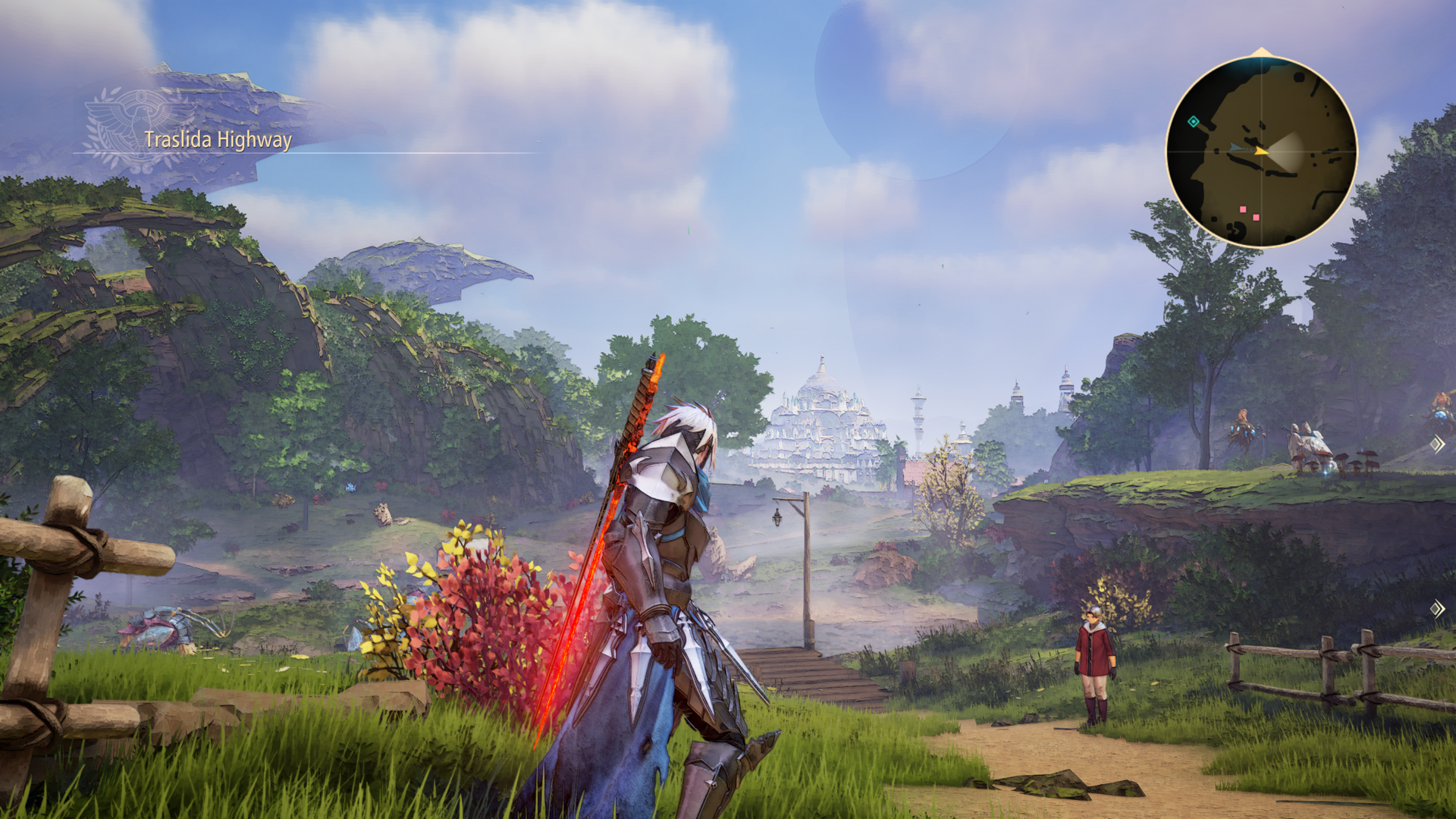 As we reported last week, Tales of Arise‘s demo launched this week (today) on Xbox and PlayStation online shops.  The demo is fairly short, and after about an hour of play, I can safely preview some of the game’s most important changes, and what has largely remained unchanged from previous entries within the long running JRPG series.

The demo starts with the offering of a variety of customizable options. These options range from the usual difficulty settings modification tab, to the game’s audio settings tweaks (mostly volume), but on the Series X we get a mode toggle that favors either performance (frames per second), or graphics (resolution).

Performance mode has the game running at a smooth 60 frames per second, while Graphics mode ups the resolution, but sticks to 30fps, as a consequence.  We will discuss the visuals and the differences between the two modes further down this preview.

At he start of the game, you are given the option of choosing one of six characters as the game’s protagonist for the duration of the demo. While you can change the controllable character at anytime during the demo, the end cutscene will change depending on the chosen character.

It is too early for me to say whether the full game (due on September 10th) will allow you to do the same, but it seems that Tales of Arise will allow for different character stories to intertwine.

For the most part, Alphine and Shionne seem to be the main characters, but it will be interesting to see how the story (and the way that it is told) plays out.

The demo does not dwell on consequential plot details. So, we are still in the dark as to what the game is really about, save for the ending cutscenes which provide insight into the characters (and do a better promotional job than the actual hands-on demo). Clearly, there seems to be a strong focus on a romance between the aforementioned Alphine and Shionne characters.

As Shionne causes extreme pain with her touch, but Alphine seems to be immune to pain. The couple seems made for each other.  I gathered all of this information from the short edited cutscenes that play at the end of the demo, so I wouldn’t consider this a spoiler.

I think Namco realized the demo itself shows too little in way of plot, thus the ending cutscenes were needed in order to grab gamers’ attention towards the game’s narrative.

As customary with this series, there is plenty of voice acting. Unfortunately, the dialog in its entirety is not voice acted (at least on this demo), even in important cutscenes, such as arriving to a capital’s gates and finding a man telling our group that there is a monster on the lose. Thus, the monster needs to be hunted down as part of a story mission in order to gain access to said capital.

The entire exchange between the citizen and the party isn’t acted out. Save for a few small voice clips at different points of the exchange, the dialog has to be read from dialogue boxes in true 90’s fashion. Coming from Gears 5 (which I have been playing for the last few days), the change is a bit more jarring than I thought it would be. This is further an issue because the ‘skits’ which can now be assessed by pressing the RB button, are fully voice acted.

The ending scene is fully acted and it certainly lends a flair of drama and importance to the game’s plot. So, here is hoping for more consistent and frequent voice acting in the final game.

Even though Tales of Arise is a cross-gen game, being that most games today (even those on Xbox Series X and PS5) are cross-gen, it doesn’t look out of place on my Series X. In fact, I was very pleased by what I saw in the area that I was allowed to traverse through in the demo.

It is Unreal 4 in all of its JRPG glory. Tales of Arise looks a bit better in my eyes than Dragon Quest XI did, but maybe that has to do more with the fact that I largely prefer this game’s edgier artwork. I do feel that there is room for improvement in terms of optimizations.

I don’t know if the base PS4/Xbox One consoles or even their more powerful counter parts (Xbox One X, and PS4 Pro) allow for performance/graphics modes. My guess is that base consoles are stuck with a single mode. That said, Tales of Arise doesn’t look good enough to not be able to run at 4K and 30fps on my One X. Thus, I was befuddled by the slight resolution hit when playing on performance mode on my Series X.

I chose performance mode, because the 30fps mode on this demo had what seemed to be “stutter” issues in its graphics mode. It looks like an issue with frame-pacing, but without the proper gear to track this, that is just a guess.

Aside from some clarity (loss), the performance mode did run smoothly at 60fps, and I greatly preferred this way of playing the game on my next-gen (or is it current generation by now?) console. Tales of Arise does suffer from visible environmental pop-up (similar to DQXI) which is disappointing on Series X (and I would assume PS5).

The World is not Entirely “Open”

The pop up issue is befuddling, because you are limited to large, but confined areas when you traverse between dungeons and towns. In this way, the game is not dissimilar to Tales of Zestiria, or the aforementioned Dragon Quest XI. It is not a true open world in the way that Breath of the Wild, or the Witcher 3 are, but the game does have a nice day and night cycle, and plenty of things to see and discover.

There is a jump button now, and the ability to swim on the surface of water bodies, which should open the game’s exploration capabilities a little bit over most of the past entries.

While the game is by far the best looking Tales game that I have seen (since maybe Tales of Symphonia back in its heyday), it is clear that this is really a PS4/Xbox One game (a very good looking one), but it doesn’t really take advantage of the new consoles. Both the Series X and PlayStation 5 should be able to breeze through this game at 4K, 60fps with no issues. Perhaps there will be a day one patch, or something similar further down the line to improve performance, resolution and pop up on the new systems.

As it stands, Tales of Arise might be the most pleasing looking game that combines cel-shaded character models with ‘realistic’ 3-D environments and textures that I have seen.

Has Combat Changed in Tales of Arise?

No, it hasn’t. But that is not necessarily a bad thing. It is the traditional Tales action-based combat frenzy, but now it runs at 60fps on the Series X and PS5. You can have up to four characters at once on the field, but the analog pad can be used to attack with different party members at certain times (even the remaining two that are not on the field).

While normal enemies can be beaten by simply mashing buttons as the characters are all at level 25 (my 4 year old didn’t die even once during these stretches on normal mode), there is a boss encounter (and an optional enemy boss on the field) that is very challenging. The demo’s boss forced me to roll, and dodge with my chosen character, and to use items, and all of the Artes (which can be equipped to buttons, as usual) at my disposal.

It also forced me to use the directional pad to attack with my remaining party members during key moments. Judging by this encounter, the game should have plenty of tough boss battles for hardcore RPG gamers everywhere.

The game also features a cooking, and crafting system which encourages plenty of resource picking from plants and rocks while traversing the land.

Is it a Day One Purchase?

It is hard to say until I play the full game, but what I can say is that Tales of Arise is a massive visual upgrade, and a slight gameplay refinement over past entries. It remains a Tales game through and through, which can be a good thing or a bad thing depending on your stance regarding this series.

Clearly, the game’s greatness (or lack thereof) will be decided by its plot, and its characters. The game’s story, however, has largely been kept under wraps. We will have to wait until September to really access how good Tales of Arise is.

Tales of Arise is the best looking and (perhaps) best sounding game in the series. The game hits all of the high presentation notes expected from the genre, and to top it all off, it looks to have an interesting premise story wise. I can’t wait until September.