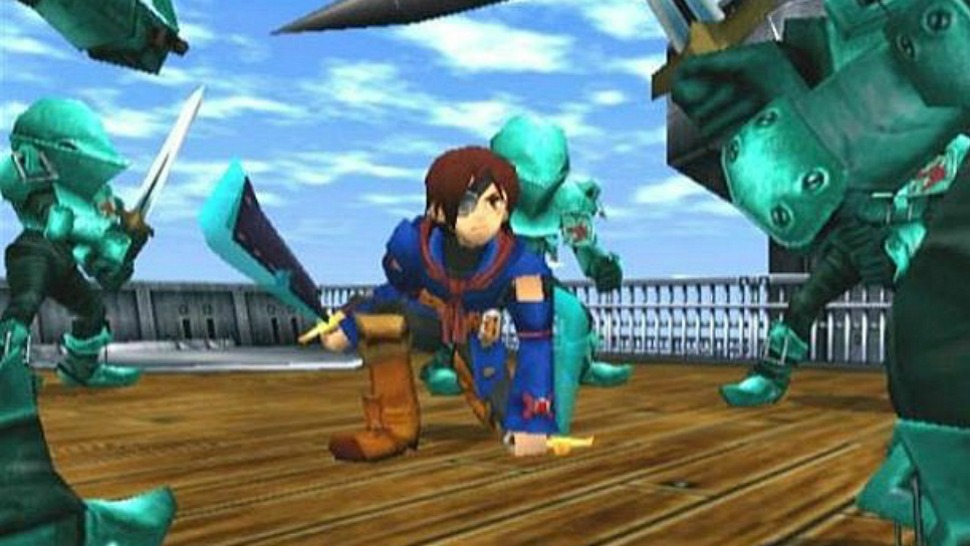 Sega’s demise as a hardware maker limited their ability to create and fund their own projects. One of the downsides of the company going under, and being bought out by Sammy Corporation in 2004, is that games than were deemed ‘un-profitable’ were given the proverbial ax. Skies of Arcadia was one such casualty.

Skies of Arcadia (2000), is living proof that you can be a great game, and by great I don’t mean that it is ‘beloved’ by those fans who played it, by great I mean, that it was critically – meaning really – great.

The game holds a whooping 93 rating on Metacritic. Professional reviewers rated the game as one of the greatest Japanese Role-Playing Games ever. Think about that. A great game, that never got a sequel, it got a GC port, but it never got a proper sequel, and more importantly, it never got a PlayStation 2 port.

It was almost as if Sega sabotaged the game by dooming it to appear in the lowest selling consoles of its era, and by keeping it away from the PlayStation 2, a system that was populated by Japanese Role-Playing Game fans.

Skies of Arcadia failed, commercially at least, but again, the game was never given the proper chance to succeed. To this day I wonder how its fortunes would have fared as a PS2 port. It certainly would have fared better than it did on the GameCube.

Sega never gave anyone a proper explanation as to why they canned the PS2 version. Perhaps, the development team tasked with porting the game had issues in porting it to the PS2, as the PS2 was more powerful than the DC, but also had twice less the amount of V-RAM.

The GameCube being more powerful than the PS2 (in almost every way) had no such issues, but at the same time if Sega really wanted Skies of Arcadia to succeed, a bigger effort could have, and should have been made in order to get the game running on Sony’s mega popular console.

Let me put it like this, as a 93 metacritic rated game, there was no reason for Skies of Arcadia to tank…unless it was placed within a market where few cared about J-RPGs.  Such a decision would be counterproductive to sales, wouldn’t? But that’s exactly how Sega’s handling of the IP went.

The PS2 was the JRPG machine of its time. In fact, its wide library of JRPGs might have been one its strongest sales points. If you didn’t like JRPGs (and didn’t want a cheap DVD player) then the PS2, in my opinion, offered little value in comparison to the GameCube which was more powerful, and had Nintendo’s excellent lineup of first party titles (but aside from Tales of Symphonia, and Baiten Kaitos, what was really there for JRPG fans?) and the Xbox which was even more powerful, and had the best the first person, action, sports and western RPG experiences available.

Why then, put Skies of Arcadia in Nintendo’s ecosystem? The GC had a very small JRPG fan base, and it (Skies) was doomed to be lost in the shuffle of Nintendo’s own first party hits. That question has never been answered, but Sega managed to reach some incredible highs with its Sega Genesis console in the early part of the 90s, only to consistently shoot itself on the foot thereafter. Culturally speaking, Sega was known for making dumb moves.

Skies of Arcadia sold 90,000 units on the Dreamcast, and 220,000 units on the GameCube. Disastrous, yes, but consider this: No JRPGs exists within the top ten selling Dreamcast games of all time. It’s Highest Selling title was Sonic Adventure at just 2.4 million units, followed by Crazy Taxi, and NFL 2K. The Dreamcast didn’t have a big JRPG fan base.

That top ten is rounded out by – wait of it – J League Pro Soccer Club which sold about 360,000 units. Yeah, Skies of Arcadia never had a shot.

Many will point out to Tales of Symphonia as a big seller seller on the GameCube in order to enforce their point that Skies of Arcadia would have sold poorly regardless of the system. According to Wikipedia however, the popular Tales entry didn’t reach the million mark, and no traditional JRPG resides within the top 28 best selling games on that Nintendo system. Again, Skies of Arcadia was setup to fail for the second time in less than 4 years.

Sales numbers at this point are inconsequential, the reason that we want a Skies of Arcadia Remake, or at least an HD Remaster, is because the game was genuinely great, and deserves another chance.

Kenji Hiruta, one of the programmers on the original game, has remained close to fans of the IP, and in Skies of Arcadia’s 20th Anniversary hinted that he was working on something related to the title, but not on a Remaster or Remake, as Sega seems reluctant to work on the franchise (if it can be called that) again.

Happy 20th Anniversary of SoA! I know that many guys want HD remaster or sequel, but unfortunately it depends on SEGA and I'm not working for SoA related games. But, I've been working something related to SoA. It may be a small change, but not zero. WE are changing something. pic.twitter.com/To4K2Aq3cA

Now, “Working on something” is not necessarily something to write home about, but Hiruta seems to be of the belief that Sega would reconsider its stance on working on the title if fans outside of Japan can make enough noise to be heard.

And so, I have written this article in hopes that it is one more small grain of salt that can hopefully add to the growing sea of pleas from Skies of Arcadia fans all over the world for Sega to listen and to finally do something with the franchise.

Skies of Arcadia was the first J-RPG that truly took the genre into the full 3-D realm with a fully 360 rotatable camera, and the ability to zoom in anywhere, it was “Ocarina of Time” like in the sense that it offered the freedom to explore every nook and cranny of its massive world. It is a game full of colorful heroes and villains, and world that just begged to be explored for dozens if not hundreds of hours.

Skies of Arcadia deserves a revival. Grandia had its HD remastered collection on Nintendo’s Switch, and it was an awesome way to get back into those classics, but Skies of Arcadia is arguably a greater game. It is shame that Sega has neglected this great IP for so long.