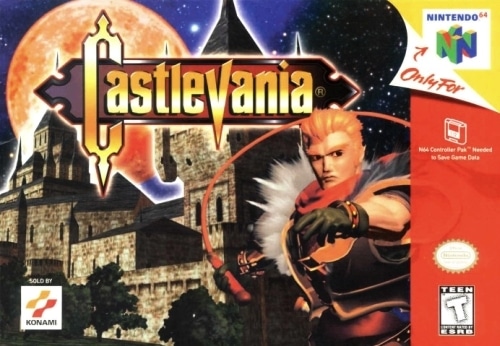 The year was 1999, and the Nintendo 64 wasn’t doing so hot in terms of sales in contrast to Sony’s PS1. However, the system wasn’t lacking in high quality games. The N64 was coming of a huge year (1998) with The Legend of Zelda: Ocarina of Time shredding every possible standard imaginable in terms of quality, and thus the stage was set for Castlevania to make its first N64 and full 3-D appearance in January.

Castlevania had been in development for years, and it introduced some nifty features to the series. The game was previewed in numerous magazines, and the developers talked excitedly about the game’s features. Castlevania would have 4 playable characters, a Day and Night cycle that directly affected gameplay and story elements, puzzles and massive levels to explore.

Unfortunately, Castlevania was seemly rushed out of the gates and two characters did not make it into the final version. We were left with Reinhardt Schneider (a Belmont descendant) and Carrie Fernandez.

The game has garnered an ugly reputation throughout the years, as many fans continue to advocate for the series confinement to two dimensions. That said, the game was positively received in early 1999, I remember EGM handing down 9.0’s to the game, and this happened just two short months removed from Ocarina of Time.

Most of the negative press the game got, it received when the Legacy of Darkness arrived months later. In truth, Castlevania (64) deserved the good reviews that it mostly got in January. Yeah, Symphony of the Night (PS1) was the ultimate 2-D Castlevania experience. Its existence probably played a role in the underrating of Castlevania (64), but the N64 title was a different game, set in three dimension. As a stand alone experience, free of comparisons, it was a very good game.

The polygonal characters were realistic looking. Castlevania featured some of the best-looking models in that time period, and the environments were, as I stated before; atmospheric.

The game was a straightforward adventure though some sections such as the Villa, allowed for some flexibility regarding how exploration was handled in the game. While the game was not as jaw dropping as Ocarina of Time, or as revolutionary in its approach; it never failed to impress.

The game visuals kept the player on edge, and the subtle day and night cycle delivered variety to the game’s locales in terms of their visual make up during certain times a day. The enemies were frightening, and some of the bosses gigantic in appearance.

In terms of the audio-visual package Castlevania (64) perhaps looked a step down from Rare’s and Nintendo’s best looking titles at the time, but the artwork was nearly unrivaled, and the visuals were truly stunning especially when compared to PS1 3-D action adventures.

A story worth experiencing

Plot wise, the game is also one of my favorites in the series, the NPCs that you did meet during the quest were important to the overall story. In terms of vampiric storytelling it was one of the finest examples up to that point in gaming history.

So far, it is difficult to see why the game has garnered such an ill reputation by revisionist history. In 1999, Castlevania for the N64 was a beautiful atmospheric game, with some of the best music in the system, and decent story to boot.

Where the game fell a little short was in its controls, which were a bit clunky at times, especially during platform jumping sessions. The jumps never felt as tight as they should, and it led to a many a death.

Combat was challenging, but there was again, an inherent “clunkyness” at times as a by product to the game being one of the earliest 3-D games on the market. Still, I never found any of the former issues as enough of a reason for me to dislike the game. There were other worst examples of character movement during the era, and Castlevania did many things that other games did not. There were puzzle solving elements, sometimes these puzzles relied on the proper use of the day and night cycle ( you could accelerate the process with a sun/moon card) as some events only took place during certain times of the day.

Enemies such as vampires would make an appearance after sundown, and bite from these enemies could turn our main protagonists into Vampires themselves if the proper healing item was not used within a certain amount of time.

My most enduring memory of the game remains the frightening Frankenstein creature, that had an electric wood cutter and two dogs. It was a hellish experience of “Dark Souls tension” moments (more than a decade before the famous title) as the creature chased me all over a garden maze. I can’t recall any other game at that time that had that effect on me.

Castlevania wasn’t perfect, and a better more complete version of it eventually found its way into the system in Castlevania: Legacy of Darkness.  Legacy of Darkness featured a complete version of the game featuring the two characters that had been cut from the first game (Cornell and Henry), and a nearly unplayable ( the game dropped into single digits frames per second performance) Hi-Res mode thanks to the Ram pack’s implementation. At that point the game wasn’t as well received as the prior entry, perhaps as game reviewers had been spoiled by newer games, some which were in the next generation Dreamcast.

Castlevania 64 has been criminally underrated in most circles, it was a great game in 1999, and if you can get past some of the sluggish controls and now outdated visuals, I recommend a playthrough of the game as it remains a challenging, and engrossing experience.