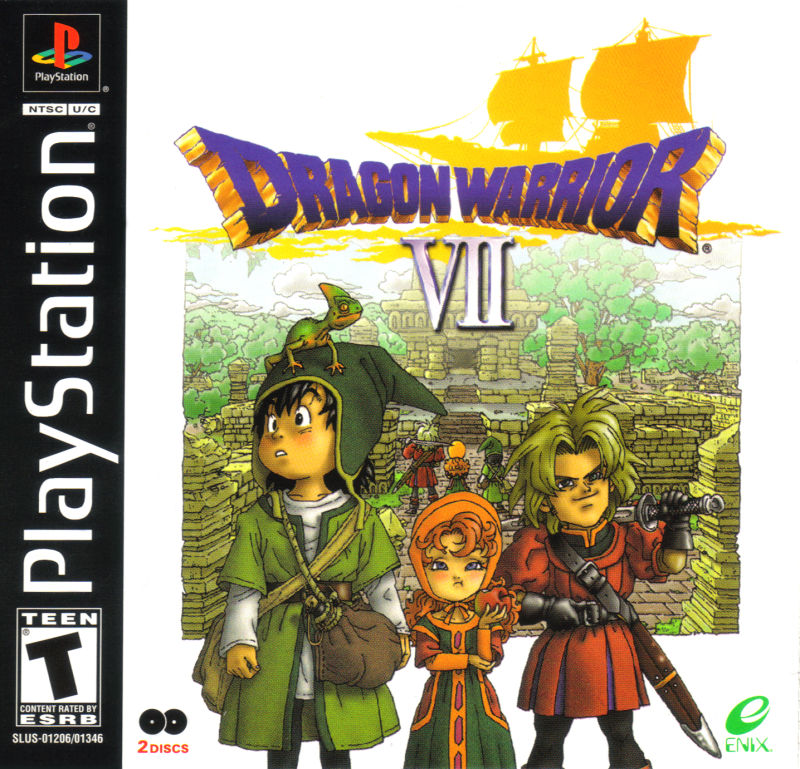 Let’s get this out of the way: Dragon Warrior VII, by far, is the worst Japanese Role-Playing Game that I have ever played.  In some ‘throwback bit’ sessions I have remembered the great, but today, it is time to look back at the other end of the spectrum.

Now, Dragon Warrior/Quest (Quest in Japan, and in the West after its 8th installment), is a renowned  RPG series. The franchise is more popular in Japan than even Final Fantasy is, and perhaps, Final Fantasy would have never been green lighted by Square back in the 80s had the original Dragon Quest not been a great commercial success for Enix.

So, my harsh critique of this game shouldn’t be taken as an attack on the entire series, as it is only an attack – and justifiably so – on 2001’s Dragon Warrior VII.

It is very important to understand that there is nothing, absolutely nothing mechanically wrong with the game. Dragon Warrior VII plays exactly like every other Dragon Quest entry that came before it. It featured a polished battle, and class system. If followed  a tried (very tried) and proven system of character progression. It featured the customary silent protagonist, and above all, an archaic way of storytelling reminiscent of the late 80s and early 90s JRPG greats.

The big issue, at least for me with Dragon Warrior (Quest) VII, is that the game arrived on our shores in 2001. Playing through Dragon Warrior VII had me wondering if its development team had been sequestered in a locked room from 1994 to the turn of the millenium until the game was finished.

Dragon Warrior VII, visually, looks like an early 1995 PlayStation 1 game. It utilized the same Grandia, Breath of Fire, and Xenogears visual style of placing sprite based characters on 3-D maps.

However, the pixelated worlds, and the squatty ugly characters are some of the worst visuals that the PlayStation 1 has to offer. Consequently, even the town and dungeon layouts felt like 2-D constructions from a bygone era.

The story is slow, and composed of some of the worst cliches in history. Character development is nearly non-existent, and to be honest, the entire game feels like it was stuck in a time capsule and missed the progress made in the genre by Lunar, FFVI, FFVI, and Chrono Trigger.

Visually, Aurally, and in terms of story presentation, Dragon Warrior VII, is just an archaic proposition that would have been mediocre had it seen the light of day in 1995. But in 2001? At the peak of the genre? It was just an awful game.

Perhaps, I wouldn’t remember the game as harshly as I do if the game had ended at the 30-40 hour mark. Instead, Enix perpetuated my suffering by allowing the nonsensical plot to continue way beyond its expiration mark and into the 110 hour threshold. Needless to say, I just hated every minute of it.

All of the evils of turn based combat were amplified during hours, and hours of grinding (the game’s bosses are difficult). I actually fell asleep on my couch a few times while farming Metables because these foes were the only enemies that yield a good amount of EXP points.

While the Job Class system is fairly deep, the combat itself is fairly simple during grinding sessions. I found that just hitting the attack button ( was it the ‘X’ button?) over and over, and over was that way to go. Perhaps, this most basic approach is what aided me in falling asleep while playing the game on the couch.

Dragon Warrior VII might have been the greatest selling JRPG of the time in Japan. But 100 hours of slow turn based grinding, a dumb plot with nonexistent character development, and the shard collecting gimmick (which many times proved to be an exercise in monk like patience and luck) drove Dragon Warrior VII to the bottom of the JRPG barrel.