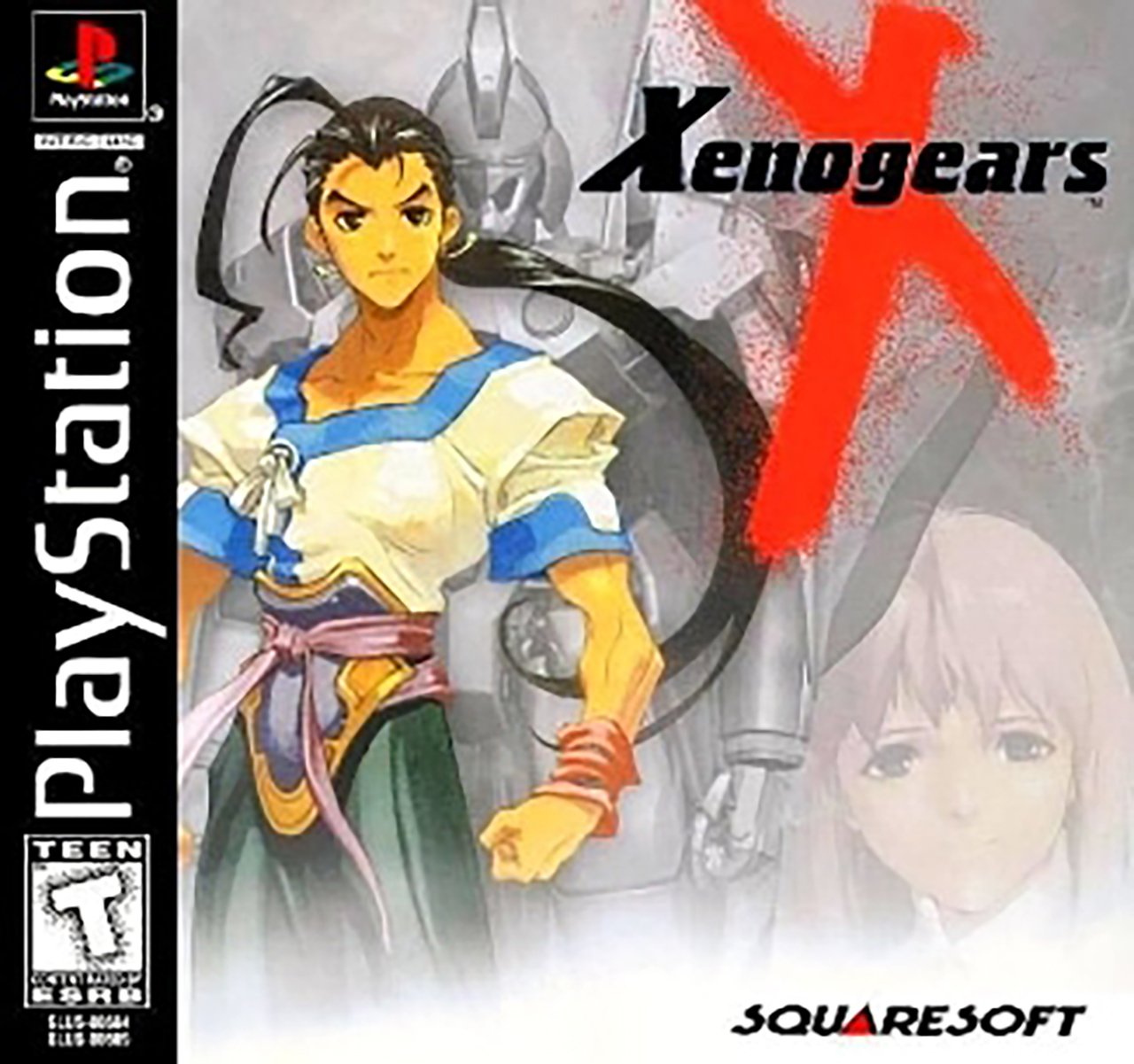 Those of us who loved Chrono Trigger, and its – not so direct – sequel Chrono Cross, might never get to see a third game in Square’s most critically acclaimed series. However, Xenogears in some ways felt like a spiritual cousin of the legendary SNES title. Made by a team composed of many of the same developers that worked on Chrono Trigger, including composer Yasunori Mitsuda, the game at times reminded me of Trigger. Xenogears presented a much more sophisticated and controversial story, so perhaps it as its music more than anything that reminded me of the earlier title.

Xenogears has an odd birthing story (though I suspect its nativity story was common occurrence in the 90s), as it was original conceived by Tetsuya Takahashi, and his wife Soraya Saga (Kaori Tanaka, S. Saga is her pen name) as concept for Final Fantasy VII.

Square was not too keen on the themes of reincarnation, religious controversy, and the ideas of  Nietzsche and Freud as the driving force behind what would be the first installment of its Final Fantasy series on the PlayStation 1, especially when the company was planning for said title to be well received in the West.

Thus the concept that would eventually become Xenogears was deemed too dark and complex for the vast majority of Final Fantasy fans.

“I and Tetsuya Takahashi originally submitted it as a script idea for Final Fantasy VII. While we were told that it was too dark and complicated for a fantasy, the boss was kind enough to give Takahashi a chance to launch a new project. Then Takahashi and I wrote up the full screenplay which contained cutscene-dialogues in final form, thus the project was born.”- Soraya Saga

Soraya neglected to mention that the script was also considered (for a time) as a possible sequel to Chrono Trigger 2.

Still, in it was the 90s and JRPGs were entering their golden era, and such there was plenty of money throw go around so they got the green light to make their own game. The husband and wife team had previously worked in Chrono Trigger and Final Fantasy VI.  Soraya created and wrote Edgar and Sabin FFVI’s legendary brothers. Takahashi had previously worked as graphics designer in FFIV, V, and VI. Square made a good a choice in giving them the creative freedom to create their own project.

Eventually, after much fear that the game would never leave Japan due to its controversial religious themes, and shots at organized religion, the game arrived on American shores in October 1998. It was widely praised as one of the greatest RPGs ever made, and perhaps the most ambitious one (in terms of plot).

Xenogears sold 1,300,000 copies worldwide, making the game an undeniable sales success. The game was not without its flaws, as anyone who played the game can testify to the disastrously bad paced (rushed) disc 2.

While Squaresoft cutting the budget and deadlines had long been suspected as the cause for the rush job. A Kotaku interview with Takahashi in 2017 shed light into the issue:

“Honestly speaking, what had happened is Xenogears as a project was staffed pretty much entirely out of new staff members, young staff members,” said Takahashi, speaking through a translator. “Back then, we had the direction of, ‘All projects take two years and that’s when we need to get it done.’ So on top of developing the game, we had to nurture and teach and grow these younger employees. Things like 3D were extremely new, which led to some delays in the schedule. It just wasn’t possible to get everything done. It was a rough way to end it, and I felt like if we do that, then the players will not be satisfied. So we had a proposal—I proposed that if we do disc 2 in this way that it turned out to be, we can finish the game with the current number of staff and the current time allotted for the schedule and the remaining budget we have.”-Tetsuya Takahashi

Takahashi made the right choice, ending the game at disc 1 would have been and even bigger fiasco, than the rushed solution of a quickly put together disc 2. It seems that this issue, and Square’s focus on the FF series drove Takashi to form his own company Monolith software.

The company went onto craft the Namco published Xenosaga series. The entries never quite matched the success of the Xenogears and truth be told its actual quality. Takahashi and Co. would eventually strike gold as second party developer to Nintendo with the Xenoblade series. The Xenoblade series while a spiritual successor to Xenogears, never has been able to capture the PS1’s title’s greatness in terms of storytelling, but it is one of the few remaining premier JRPG’s on home consoles.