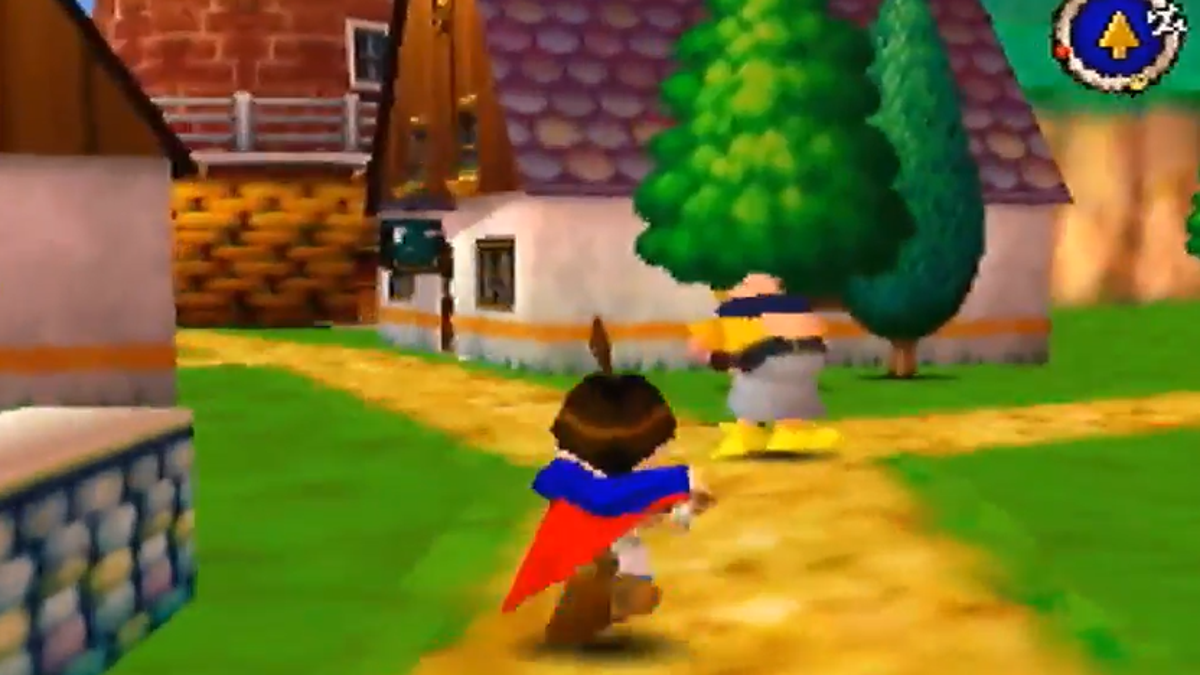 The Nintendo 64 was not known for its RPGs. While it’s best three are some of the greatest games of all time (The Legend of Zelda: Ocarina of Time, The Legend of Zelda: Majora’s Mask, and Ogre Battle 64: Person of Lordly Caliber), apart from those, all that we are left with is Quest 64, and Aidyn Chronicles: The First Mage (ironically, both were THQ published titles).

The Zelda games are Action-RPGs, and Ogre Battle 64 is a tactical one. Nintendo 64 gamers in the West did not have a “turn based” traditional RPG for the system, in the vein of Final Fantasy, until Quest 64 arrived.

Nintendo Executives did not seem believe in turn based Role Playing Games in the mid 1990s. The previous statement is strange, mainly because Dragon Quest, and Final Fantasy were huge sellers for the NES and SNES, albeit only in Japan. Nintendo walked into the 32-64 bit full of over confidence on its own software.

Hindsight is 20/20, and (Japanese made) RPGs were never bigger (as a commercial genre) than in that mid 90s to early 2000s period, but coming into the Nintendo 64, Nintendo had reasons for believing that its own software alone could carry the day for them.

There are no RPGs (save for The Legend of Zelda: A Link to the Past) on the top ten best selling SNES games’ list. Final Fantasy VI came in at #11, and mostly on the strength of its sales in Japan. Nintendo had a monopoly on the best selling titles for their 16-bit system. Normally, the company felt that it would continue its success with the Nintendo 64, especially given how ground breaking Super Mario 64 was shaping up to be, Sega’s  mounting struggles, and Sony’s complete lack of experience within the industry.

Nintendo had operated (since the mid 1980s) with a “You need us, we don’t need you” approach in its dealings with third parties, and that way of thinking carried over when Squaresoft suggested that a “CD” based system was the way to go (as their vision for Final Fantasy VII would require CD format’s large storage capacity).

Nintendo did not care for Squaresoft’s suggestions, as the company crafted a machine with Nintendo EAD’s needs in mind, third parties be damned. The following paragraph summarizes Square’s ordeal with Nintendo perfectly:

“At that time, Square was really close to Nintendo — we were basically like a second party for them. So when their new system was in development, we gave them lots of advice, like, “You’re going to need a CD-ROM drive for it,” “You don’t have enough bandwidth to do what we’re trying to do,” and, “With what you have now, we’re not going to be able to make an RPG.” We gave them lots of advice. But [Nintendo president] Yamauchi-san at Nintendo basically refused to listen to any of it. And that’s when Sakaguchi-san and the management team at Square decided, “OK, we’re going to go with Sony now.” — Shinichiro Kajitani Vice president, Square USA

After this, other developers such as Enix followed suit, and Final Fantasy VII‘s eventual astronomic success opened the gates for RPGs to be hugely profitable on Sony’s system (Sony had much better publishing deals with third parties), and the rest, as they say, is history.

Nintendo 64 Owners Were “Blessed” With Quest 64

Despite being a mediocre game, Quest 64 did beat Ocarina of Time out of the gates. Consequently, Quest 64, against all odds (and mediocre critical scores) sold 470,000 copies. For comparison’s sake that is a little more than five times the amount of copies that the all time great RPG Skies of Arcadia sold on the Dreamcast. Quest 64 was that odd game that happens to be a critical flop, but a commercial success.

Imagineer, the developer (not known for RPGs), laughed all the way to the bank, as critics (EGM magazine comes to mind) laughed at Quest 64’s less than stellar attempt at carving a space within the genre.

Nintendo 64 owners were starving for a RPG that took advantage of the machine’s unique capabilities, and many couldn’t wait for Ocarina of Time, thus Quest 64 did well on the market.

Yes, and no. If you judge traditional RPGs solely based on Story, and Music, then yes, Quest 64 is one of the worst games in the genre. If you factor in visuals, real state (the game had some huge open spaces for the time), and some of the technical elements that it introduced, then no, it wasn’t THAT terrible.

For the most part, RPGs on the PlayStation 1 weren’t fully 3-D. Final Fantasy utilized pre-rendered backdrops for towns and dungeons, and its world map was not 1 to 1 in proportion to its characters (and towns). Basically, characters in PS1 RPGs were oddly, much larger than they should realistically had been in contrast to their environments while traversing 3-D world maps and areas (this visual style was carried over from the genre’s 2-D days).

Quest 64 used the superior rendering technology of the Nintendo 64 to render a full blown 3-D world with realistically proportioned to its characters. The Final Fantasy series wouldn’t achieve this until the PlayStation 2’s Final Fantasy X. So, in that sense, players who acquired Quest 64 in June 1998, were treated to an amazing sense of scale accompanied by smooth and colorful 3-D visuals.

Keep in mind, Ocarina of Time wouldn’t arrive until November that year, thus Quest 64 was many a gamer’s first experience with a fully realized 3-D world (complete with a day and night cycle) that was filled with towns and NPCs to talk to. The experience was mesmerizing in 1998, and it could be the reason why some people, to this day, have loving memories of the game, despite its many flaws.

Apart from that, its surprisingly good visuals for the time, Quest 64 doesn’t do anything else that well. The combat system was interesting as it allowed freedom of movement within a combat circle while still waiting for turns to attack. The system focused on skill usage rather than traditional EXP gains. This meant that if you went through the game smacking monsters with Brian’s (the main hero) stick/wand, your ability to dish damage with said wand would increase. The same happened with spell casting. The more that you used a particular spell, the more that the particular spell gained strength.

Hardly ground breaking stuff these days, I know, but in 1998 the system felt fresh. Unfortunately, a poor (and I mean poor) linear story, a massive, but largely empty world, and too many random encounters turned Quest 64 into a tiresome, and uninspired adventure after a few hours of play.

It is a shame, because Quest 64 did have some interesting monster design (including a very FF inspired last boss), and a large colorful world.

It is Worth a Play Today?

Yes, it is (as evidenced by our ‘Let’s Play’ video above), but only if you are into old Nintendo 64 games for historical purposes. This is not a very fun game, because there are some many options available these days that are vastly superior, and unlike in 1998, Quest 64 can no longer just get by on the ‘freshness’ of its large 3-D worlds.

As a bonus, we have included a scan of GamePro’s review of the game (below). Keep in mind that GamePro was known for handing 5/5 scores to average games, so Quest 64 getting a mediocre tally should give you an idea of how pedestrian the game was at the time of its release. 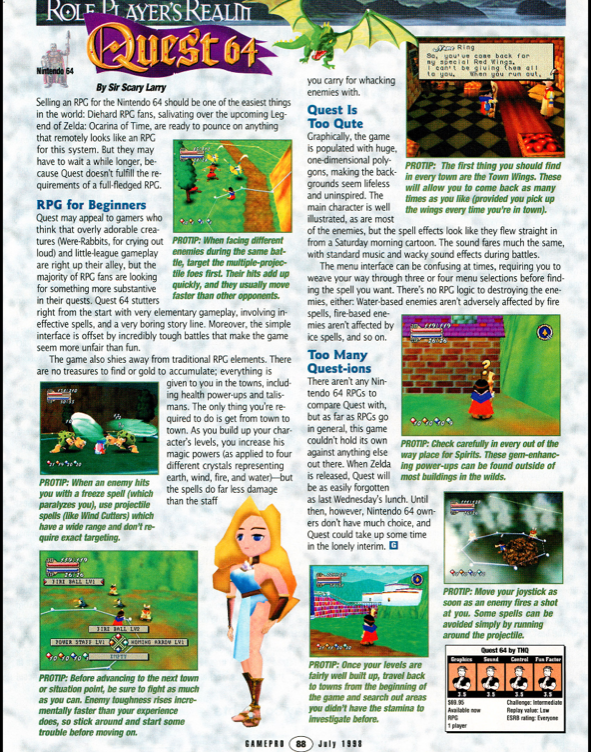