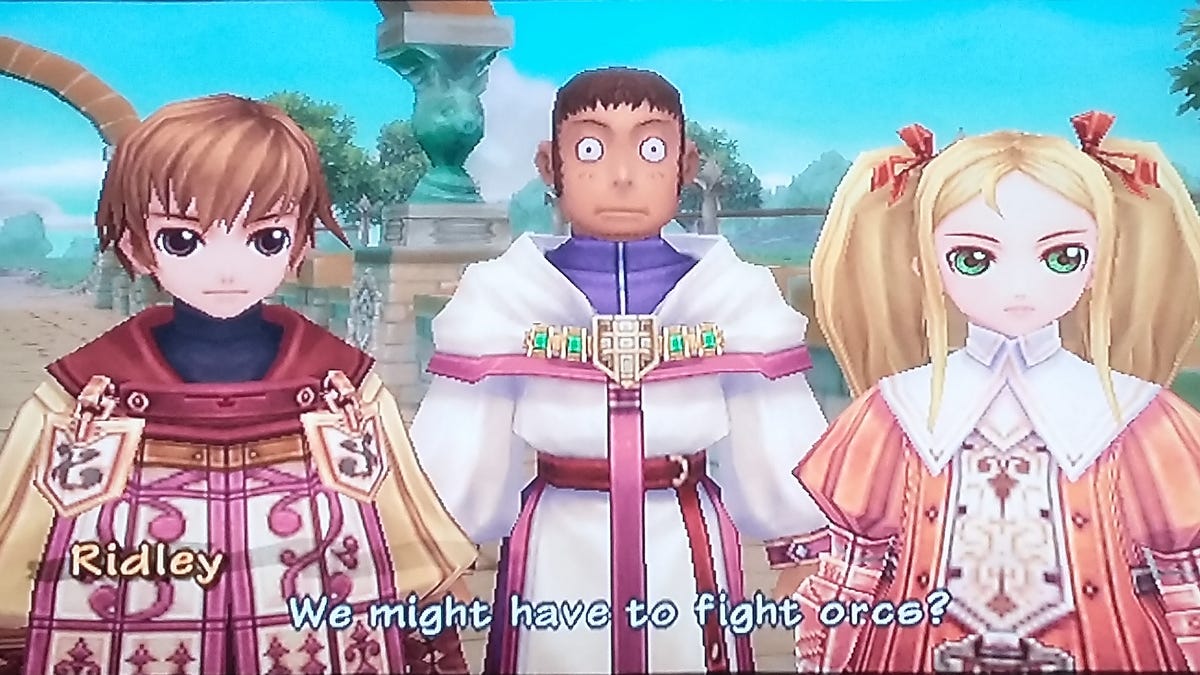 Radiata Stories is Tri Ace’s mostly forgotten PS2 IP. It is surprising that 16 years after its release I am talking about this game in a solemn manner. We would never receive a sequel, and given how the JRPG genre is no longer ‘in’ with mainstream gamers, it is likely that we never will.

My expectations for Radiata Stories were high. Tri-Ace at the time was one of my favorite developers thanks to its Star Ocean series and Valkyrie Profile. While Radiata Stories was received with average to good reviews by most of the critic world, I rated it an 8.5/10 15 years go.

I felt that it was a good game greatly helped by its funny script and fun combat system. Radiata had all the trappings of an experimental little project and some areas suffered for it.

The visuals were unrefined. Star Ocean 3 looked better in my view and it was an earlier Tri-Ace effort. The ability to recruit 167 characters was fun for awhile because the Day/Night cycle system allowed the developers to craft scripted schedules for the game’s NPCs (not unlike Nintendo what had done with Majora’s Mask’s own NPCs five years earlier).

Some characters were available for recruitment only a certain times during the day(or night). This system encouraged multiple hours of play and multiple play-throughs because of the branching paths of the game’s storyline.

The two paths had surprisingly dire and dark consequences on some of the most beloved party members depending on your choice. I wrote ‘surprisingly’ because the game is mostly on the cute, and humorous side of things.

The Granstream Saga had allowed for two different endings back in 1998 with both meaning the death of a different love interest, but that was a very dark game by comparison.

Still, the overall story of the humans vs non-humans that surrounds our party, while somewhat cliched, keeps the game fresh. The story is worth following because (apart from the comedy) you can decide which faction to join, and change the game’s eventual ‘not happily ever after’ endings depending on which faction you are on.

Radiata Stories’ protagonist (only controllable character during the action based battles), Jack, is a certified jerk.  By pairing him with “Miss Perfect” Ridley, and clumsy as can be, Captain Ganz (who leads the party early), Tri-Ace created one of the funnier trios in JRPG gaming history.

The situations in which they are placed in, and the characters around them are purposely on the “comedy” side of things, and it makes Radiata Stories an entertaining 30 hour play through despite the fact that it is not an impressive game anywhere else.

Basically, I have played better JRPGs (including Tri-Ace’s Star Ocean 3), but seldom did I laugh and had as much fun while playing them as I did while playing Radiata.

A particular scene in which Jack tried to storm a Fort, all by his lonesome self, remains vivid in my memory as one of the funniest moments in a game full of comedy fueled one liners, and ‘silly’ situations.

Truly, Radiata Stories is the type of RPG that you play because you want to keep following its characters, and see how it ends up for them.  Strong characters can save a weak storyline and this is the case here.

Radiata Stories is Nice JRPG Acquisition Even for non Collectors

With a hefty $49-$100 plus dollar price tag (used) on Amazon, Radiata Stories is an expensive endeavor that will attract collectors more so than the average JRPG player. Yet, I have to recommend the title as it is one of the funnier, most endearing quests that you will find.

While collecting characters isn’t as fun as it was in Suikoden games, and the game is far simpler than Star Ocean 3, its unique funny nature makes it a must play for those looking for a good (short) memorable romp.

Buy it! You won’t regret the decision.