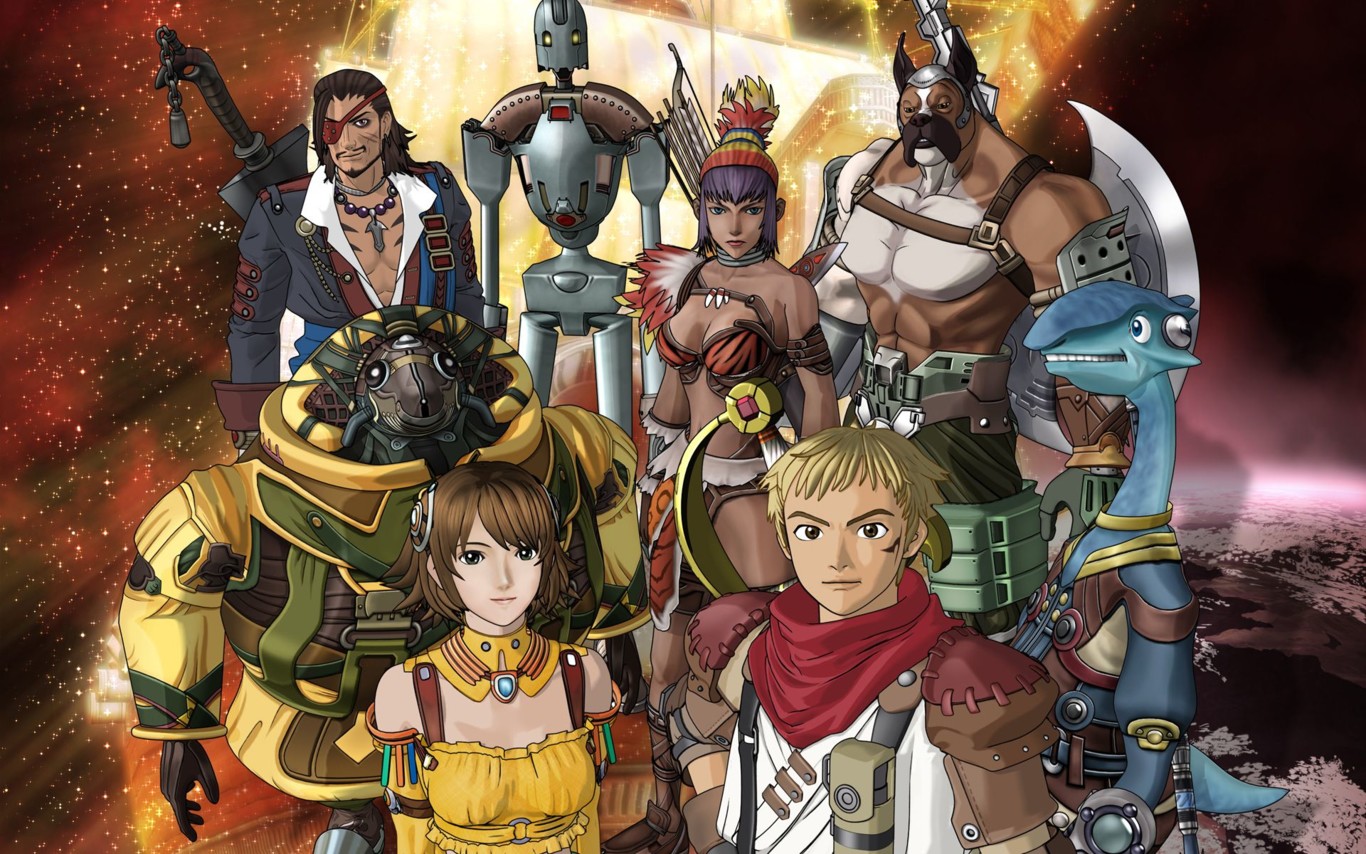 At this point, Level-5 is a legendary (as far as J-RPG development is concerned) developer. The Team is responsible for the Dark Cloud series, The Ni No Kuni series, Rogue Galaxy, and Dragon Quest VIII (among other titles).

Today, I have decided to take a look back at Rogue Galaxy, Level-5’s last PlayStation 2 epic. Has it aged well?

Rogue Galaxy is a party action based combat game, and in that regard, it is a simpler game than the Star Ocean series (which has a similar style of combat) has been so far. Random battles populate the game’s dungeons, and its linear wild areas (there is no world map, just interconnected areas).

While combat is generally on the easy side of things. There is a caveat, however. The game’s item system works well, but I found it cumbersome. Grinding for levels was my preferred way for character growth.  In this sense, Rogue Galaxy can be annoyingly drab, and time consuming.

After a decade of having finished the title in 2011. I still recall the long stretches of random battling and the slow EXP gains, that made “Level gains” a difficult thing to achieve. Items could be equipped to a ‘Sphere Grid” like chart called the ‘Revelation Flow’ were specific items  determine the stat and ability increases when attaining levels.

I found this a tad cumbersome, and I wasn’t a fan of it. Still the game has plenty of side quests that fall with-in the typical JRPG side quest fare, but there are some exceptions. I found the “Insectron” game to be a good time waster, as it was an engaging side diversion from the linear main quest.

A Epic Story….That I Can’t Quite Remember all That Well 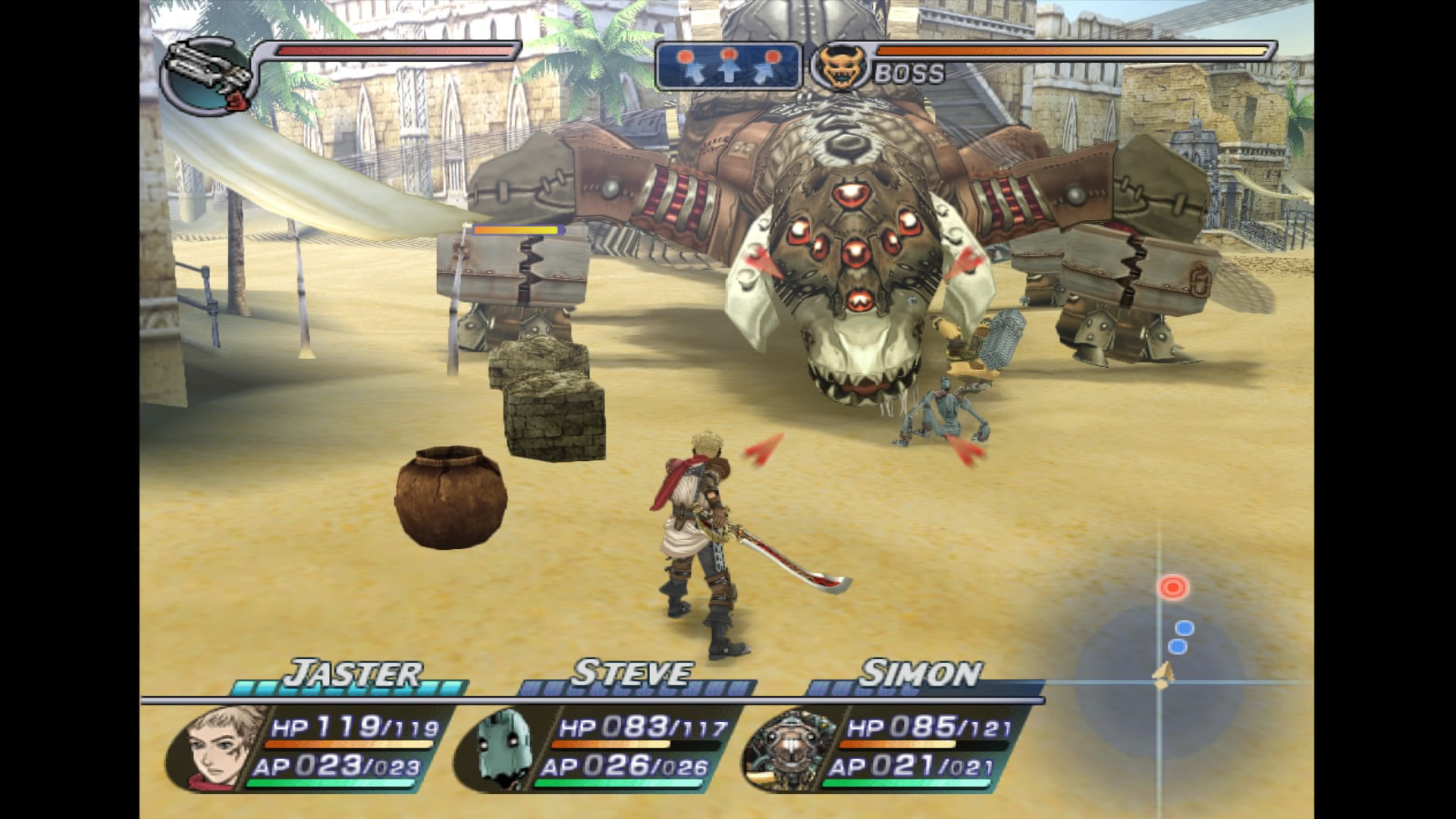 Rogue Galaxy has a long and linear storyline, but one that didn’t quite capture me. An excerpt from my 2011 review of the game explains my sentiments towards this game’s tale best:

The Plot is very uninspiring, in the sense that we, seasoned RPG buffs, have seen the tale of an orphaned boy joining a party of characters (in which there is a love interest) in order to save the world, too many times before. Daytron Corp. (the bad evil empire) is the main Villain/Opposing Force for the most part, and one can successfully guess from the very beginning of the tale how Rogue Galaxy will end.

Added to the game’s predictable storyline, are the characters’ developmental woes. Rogue Galaxy’s cast is not very well developed. The game moves at a slow pace thanks to all of the random battling that has to be done in order to reach the final credits, and the character relevance is lost in the shuffle.

The game features a lot of “Planet Hopping”, so I never set ‘roots’ in any particular planet, and this was a problem, because I did not care about the characters and NPC’s plights. Curiously, even though I complained about the long stretches of random battling (in long and uninspiring dungeons), it was the combat, and weapon synthesis that kept me playing through the 41 hours that it took me to finish the game.

My Launch Model PS3 Died in a Grinding Stretch

The overall tone in this …eh, memoir of Rogue Galaxy, has been negative. I did rate the game a 7/10 in my review of it, ten years ago. That said, there were stretches in the game where I did have single 5-7 hours non-stop play sessions (which were mostly spent in combat). So, I do recommend JRPG gamers to give this one a tryout if they can find it.

However, I can’t say that I remember Rogue Galaxy with much fondness, as perhaps the game’s biggest claim to fame in memories of it, is that it killed my PlayStation 3.

Yes, during one of the long grinding sessions my PlayStation 3 suffered the “Yellow Light of Death” issue that plagued many Sony’s 3rd generation systems. I was angry, at the time, because I had a launch edition of the system (with the full backward compatibility features), and I had to settle for a slim version of the console months later (in which Sony completely went cheap by removing backwards compatibility from it).

Perhaps, that incident has clouded my mind a bit in regards to my feelings towards the title. But I do feel that Dark Cloud, and Ni No Kuni were better experiences.

Should You Buy Rogue Galaxy Today?

Visually, Rogue Galaxy has aged well. It was a late-gen PS2 game, and one could say that JRPGs in general, haven’t moved leaps and bounds beyond that visual style (cel-shading) of 15 years ago.

Rogue Galaxy sold about 840,000, which isn’t a big number for Level-5 (whose Professor Layton games are multi-million sellers), but it is a large enough number to make the game a cheap and accessible find on Amazon.com.

For under $50 dollars, a copy with its original case and Instruction Booklet can be easily purchased in the popular online store. So yes, if you are a JRPG fan, or a Star Ocean fan, and liked Ni No Kuni, and other Level-5 works, I think you will find much to like in this game, as long as you are not expecting a timeless masterpiece.