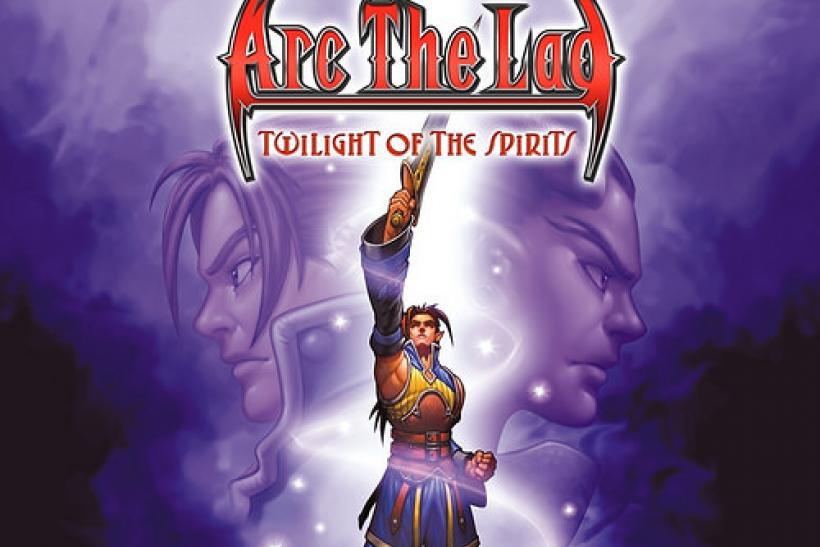 After almost four years of owning my PS2, one thing had become clear. The golden era of the RPGs had started with the release of FFVI and Chrono Trigger for SNES and had carried over into the release of Skies of Arcadia in the Dreamcast at which point the Golden Era was over. During those 6-7 years the PS1 was the console of choice for RPG developers and fans. So many great titles where released during that period of time, it was a time of quality and quantity.

Now the PS2, which would still be considered as the RPG gamers console of choice, is nothing but a shadow of the PS1, in terms of RPG games. In fact I have spent most of my time with it, playing more PS1 games than PS2 ones. Only two RPGs in the PS2 (Suikoden III and FFX) had been worthy being called great games, and even then FFX is nothing compared to the FFVIIs and FFIXs of the past generation.

You can include Arc The Lad Twilight Spirits into that short list of great PS2 RPGs. Surprisingly in some ways Arc The Lad is better than the other two games in the trio. I mentioned the word surprisingly, because this Arc The Lad title is one humble game, at least when compared to the production Values of FFX, X-2, and Xenosaga. The game eclipses Xenosaga, and gives FFX and Suikoden and run for their money with its good narrated story of racism and prejudice.

The strongest point of the game its the story, the last time I played again for 12 hours straight just because I had to see what happened next in the story was a long time ago in 1997-98 when I first played FFVII. That is a bold statement indeed not many games can be compared in equal terms with FFVII when talking about the story. Arc The Lad’s story is not nearly as fascinating as FFVII’s yet the anticipation of an eventual clash between Darc and Kharg the game main protagonists always held me glued to the controller enough to deprive me of some basic needs, such as eating and sleeping.

Two races; Humans and Deimos inhabit the Game world. Both races despise each other, of course that is the stereotype. Not every single Deimos despises the Humans and there are some Humans who get along with the Deimos.

The story mainly follows the tale of Kharg, Darc and Lilia. Darc is a Deimos Orphan slave who has always been treated like garbage for being a Half-breed. The Deimos look down upon him and so do the humans, however he has Deimos pride and when the wind spirit who resides in his half of the wind stone tells him to save the world, he interprets it as wiping out the Humans to save the Deimos. Darc embarks then in a mission to save the Deimos and become their King.

Kharg in the other hand, is a human prince who has always lived by his mothers side and is loved by everyone in his village. His life is heaven compared to Darcs. He interestingly carries the other half of the wind stone. By this point about an hour or less into the game is easy to figure out that Darc and Kharg are brothers. This is where it gets good. Kharg despises the Deimos yet he is unaware that he is one of them, Darc despises the humans even though he is one them and knows it, he wants to destroy all of them except Lilia.

Lilia is a beautiful Human girl that possesses the ability to talk to the Spirits. Lilia carries with her the light stone, and thus is persecuted by the Imperial Army who wants to collect all of the great elemental spirits stones. Because of this Lilia often runs into both Kharg and Darc who both live in different parts of the planet and thus she will become their only connection for most of the story. Lilia also creates two interesting love triangles in the game. Explaining the story further will result in spoilers so I will not do so.

The game’s story has a perfect flow for two reasons, the battle system is brilliant and you never have to stay in one area leveling up for a long time (at least until before that nightmarish last boss!!) and the game time is more or less spent evenly playing switching back and forth between Darc’s and Kharg’s story. So a lot like in Suikoden 3’s chapter system, in here you get to see the story from both sides the Deimos and the Human. This is great because it builds up the anticipation for the brothers meeting, and close to the ending the game actually lets you decide which side you fight on. The game’s ending however is very good but could have been better, it leaves plenty to the imagination I hope some one writes a good Fan Fiction about this.

I am impressed by what Cattle Call Inc. (the developers) has done with the game’s story.

Graphically the game shows that its not on FFX’s pedigree, the character design is good, but their rendering in 3-D, lacks the realism of the FF character models. The enviroments however while technically inferior to FFX’s, sometimes manage to artistically impress and rise above those in FFX. The water effects for example are better than those in FFX as you can see ripples on the water making it look and move more realistically than it did in FFX. However there are areas in the game that just fall flat because they are too sterile and lack details and detailed textures. Visually the game is in the above solid area, not too spectacular but once in a while it manages to impress. 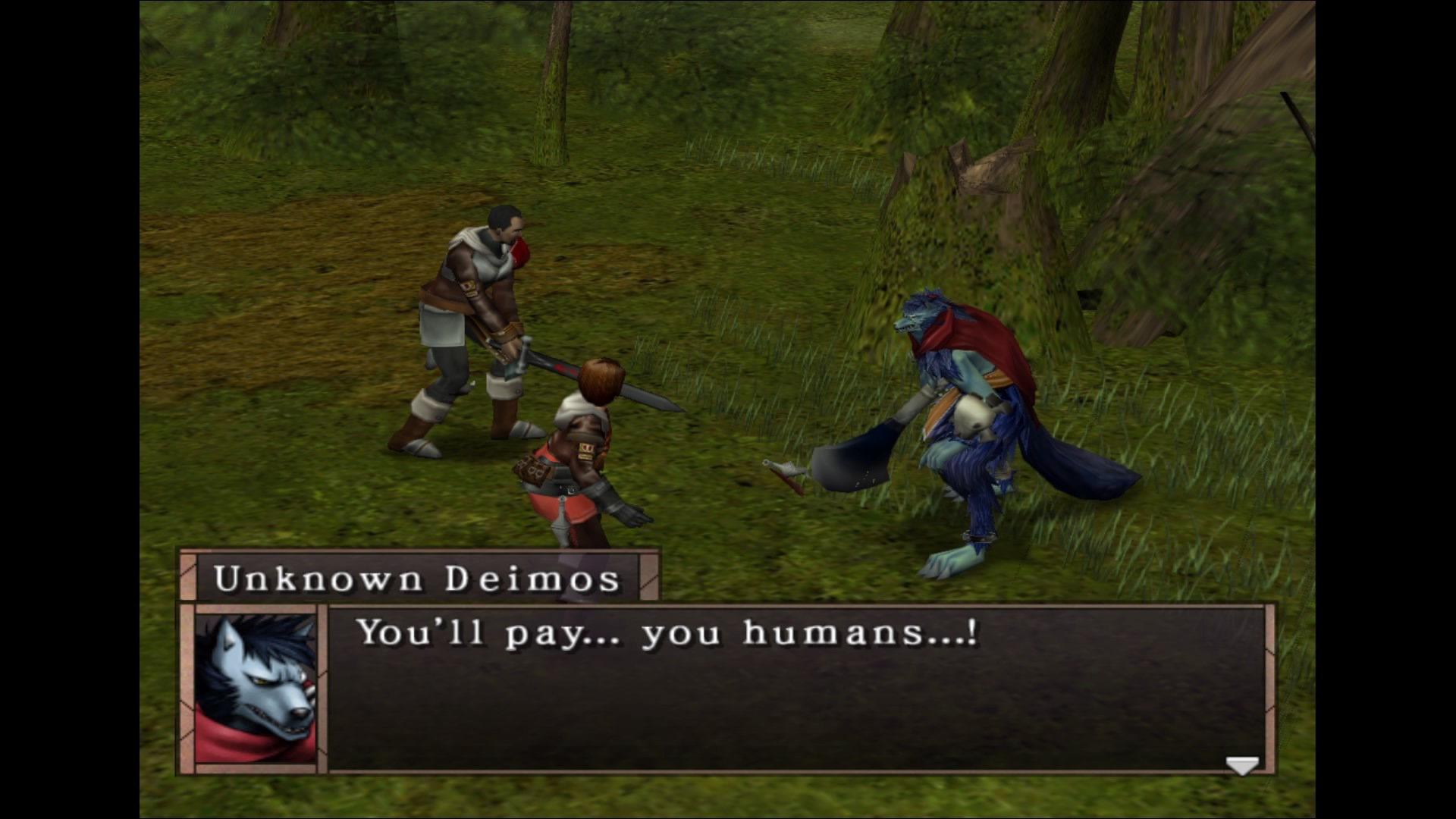 The game’s visual style has an old school feel. Unfortunately those of you expecting an old school real-time three dimensional world map to explore will be disappointed. The game does feature a hybrid 2-D to 3-D world map filled with lines and dots of where to go next, a lot like Grandia’s but better done. To say the least this is better than the Garbage square pulled on us with FFX’s map.

One visual weakness in Arc the Lad TS is the lack of FMV. But that is a weakness easily forgiven for the realtime cutscenes are well done.

Musically there isn’t much to say, except for the fact that it has a solid score, and a good theme song. I tried to pinpoint the composer of this but there are many names that are associated with Music in the credits so its hard to tell. The acting is very good, but not Xenosaga good. The Sound effects are your standard fare.

Gameplay wise the game is real simplistic, there isnt much to explore really. The movement in the environments its pretty straight forward, the movement in the world map is similar to Grandia’s except that sometimes when you pass over a map marker, a battle might start in which case you have to fight.

The battle engine however is where the real innovation and originality in the games gameplay reside. While you still have to wait for your turn to attack, you are not longer confined to stay in an specific place in the enviroment. You can move in the around the blue space on the field, to get you closer or farther from an enemy, this adds depth and strategy to most battles, also the battle menu is very flexible letting you the equip and remove Parts and accessories on the fly.

The spells and special moves in the game are learned through leveling up and can be used if you posses an adequate amount of spirits stones. Luckily Spirit stones can be bought for cheap in stores and enemies drop them on the field so you can pick them up and use them during the battle itself.

Leveling up in this game doesn’t occur after battles but during battles, depending on how much damage your characters dish out, so in a long boss battle characters can level up multiple times during combat.

Most of the battles where okay in difficulty, but the last boss with took many, many tries to beat but once beaten the game features the not too often used but great New Game+ mode which will allow you to breeze through the game the second time around.

In the end a worthy additon to your RPG library, a definite top three, top four RPG for the PS2. A story full of anticipation, excitement and shocking twists take Arc The Lad: Twilight Spirits in to the coveted elite level. I am anxious for the next Cattle Call Inc. RPG; the company has some solid talent.

Graphics: 8.5-Solid, even though some environments are impressive.

Music: 8.0-Solid, even though I wish there was a larger repertoire of tunes.

Story: 9.1-Could be the most entertaining story on the PS2 today.

Addictiveness: 9.0-Very addictive until the end, after is finished you can play it again in New Game Plus mode.

Overall: 9.0- I am very impressed by the Cattle Call Inc. team of developers, they have crafted a very memorable RPG.

Arc The Lad: Twilight of the Spirits for PS2 currently holds a Metacritic Score of 72