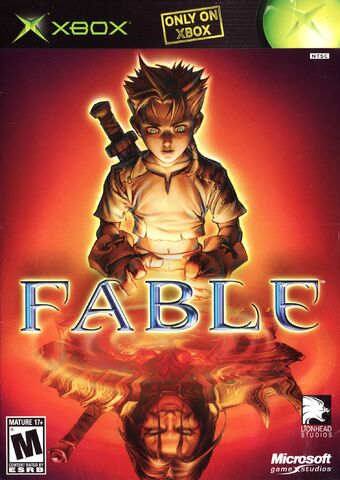 The XBOX is famous for its lack of Japanese RPGs, however, the console has been blessed with a few great western RPGs. One of these RPGs is the subject of this review in Fable.

In the making for more than 3 years, gamers waited patiently through the endless delays, and got more than tired of Peter Molyneux’s (The designer and master mind behind the game) constant ramblings about the game being the greatest RPG of all time, and what not. Listening and reading to Molyneux’s comments about Fable made me genuinely believe, that indeed, the man believed his own hype.

Eventually, however, the game’s own fabricated hype, created no less by its developing team, is what ultimately downed it. To start, Fable isn’t perfect; in fact it has many, many, many flaws. Not as many as say Morrowind, but the game for all of the talk of being tremendously open ended doesn’t accomplish a ¼ of what Morrowind did in that regard.

To start, the world of Fable is colorful, lush and lively. The Graphics here are only surpassed by the excellent, and newer Jade Empire, and not by much. However, Fable’s graphics, while fantastic, never completely submerged me into its world. Perhaps, it is because the game that was “supposed to let you do anything that you wanted to do in its game world” doesn’t really let you do what it promised. 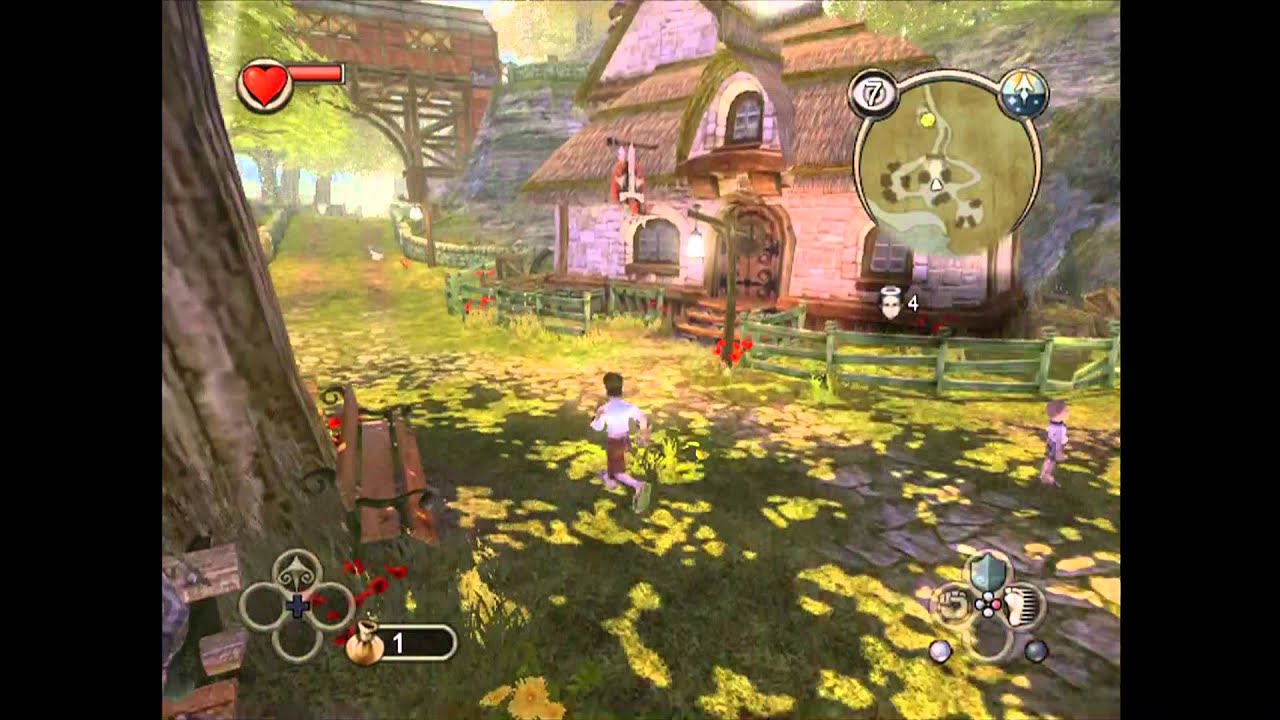 For starters, unlike the recent Zeldas and Morrowind which offered a large degree of interactive freedom, in Fable, if you can see something on the screen, it doesn’t necessarily mean that you can go there.

The game world feels segmented because you are always following an enclosed trail. You can never jump over the three foot tall fence that keeps you from getting off the trail which is ridiculous. I am supposed to be this great hero, but I can’t jump over a 3-foot tall fence? Also, the water looks spectacular and yet I am not allowed to swim and explore the under water scenery.

The world in Fable – in great part- lacks interactivity. The game’s real state is there merely there to be observed. This fact completely boggles the mind since the 7 year old Ocarina of Time allowed you to swim, jump, and interact with most of the things that you saw on the screen.

These major shortcomings in exploration are definite chinks on Fable’s armor, but the worst is yet to come.

The Main Hero doesn’t control too well, as I pointed out before, he is unable to jump or swim. However, he is able to fight (at least he can do something) and fart, yeah what a useful skill that is…

Lion Head (the developer) attempted to shamefully “re-invent” Ocarina of Time’s Targeting system (just like every other action game has tried since then) and it’s mind boggling that seven years after Nintendo’s masterpiece pulled this targeting system flawlessly no one else has been able to mirror it in quality.

Fable’s targeting system is very flawed; one can easily hit a partner or an innocent bystander in the middle of a melee. Because it’s easy to miss-target an enemy and even easier to lose the target since enemies that aren’t targeted can kick your behind while fighting a targeted enemy. Also, the main hero feels some what like a limited warrior when compared to Nintendo’s pretty boy elf, the main hero’s arsenal of moves is unimpressive.

Not only does Fable manage to feel like an average hack and slash game in terms of swordplay, but it also features a mediocre archery system. Truth be told, I prefer to use the bow and Arrow more than any other type of weapon in the game (including magic since it makes you age quicker).

Again, while one could aim and shoot with incredible precision in the 7 year old Ocarina of Time, if one went into first person view. In Fable, going into first person to use the bow and arrows in the middle of a battle is as suicidally stupid, as jumping out of a plane without a parachute. The manual aiming feels a bit loose which results in inaccuracy so it is best to stick to the game’s auto targeting.

The Magic Spells themselves while cool looking, are not as intuitive, and as sharp as they should be. Plus, using magic makes you age quicker, and since the game is super easy, there won’t be a need for magic spells in the entire play through.

At this point in the review we know that Fable is a gorgeous looking game, but the levels are linear which kills the exploration and that the combat system is a bit clunky. Now we will move into the one area that can save, or on the other hand finish burying an RPG deeper in the hole: The story.

The story in Fable for the most part sucks. This is not a problem in a game as free form and as historically rich in lore as Morrowind. However, Fable plays more like your usual Traditional Action RPG, and the world does not have a deep historical background to speak off. So, the Story telling aspect of the game sadly falls flat in its face.

The Hero doesn’t speak (silent protagonist), does not have a real name, as he is simply known as “Hero”. Not only is the main character lacking personality, but also the story is cliched, and simplistic. The main goal here is for the Hero to avenge his murdered family, and try to save his sister while at it. Of course, the game then offers some twists here and there, but anyone who has played RPGs before will immediately feel underwhelmed by Fable’s lack of a strong narrative.

Fable’s story is told in bits in between “Guild Quests”, and the story really seems to take a back to seat to the Mission oriented gameplay of the game.

However, while the tone of this review has been a bit Harsh towards Lion Head studios’ and the game itself, there are some good things that the game has going for it.

The first one is the music. The score is not as Epic as the FF games’ soundtracks, and yet,  it fits the mood of the areas you are adventuring through perfectly.

Also, the game’s progression system is very intuitive an easy to master. It works like this: for every enemy that you kill, you get green orbs which later on you can use on the Hero’s Guild to upgrade your characters stats, such as Strength, Skill or Will (Magic). Depending on how you use this system your Hero will transform into either a massive muscle bound Swordsman, or a physically frail looking, yet powerful Magician or something in between.

The mission-based system is well implemented for those who like to travel while adventuring and killing monsters. However, the mission system itself could have been a improved if the was a greater variety of quests to choose from. Perhaps making some of them more rewarding and a bit more challenging.

The Good/Evil system works well, villagers will cheer you on or run frightened at sighting you avatar depending on your previous actions. However, I find the horns, and red eyes thing when you are evil a bit cheesy. Why can’t I be a good looking evil Warrior? The marriage system is a nice side diversion, but really, there are no apparent advantages in being married. So, I saw the marriage thing as an unnecessary part of the game. Also, it doesn’t help that the game’s villagers are composed of pretty much four or five character models. It doesn’t help much for me to care about my wife when there are 100 others that look exactly like her.

Even though Fable lacks a lot in the character department in terms of variety. The items department has a lot going for it. There is a large, in fact, a huge selection of items, which includes anything from swords, bows, to clothing and beer, yes beer. It is a shame that the game world is not compelling enough to promote the use of these items, and therein lies the Fables biggest flaw; it’s simply not fun to play.

While Ocarina of Time’s Selection of items seems completely out gunned when stacked against Fable’s in terms of numbers. Conversely, in terms of actual item use, each item in Ocarina has different, fun to play around, and sometimes rewarding uses. The items in Fable really serve no purpose and are just there for the sake of being there.

The lack of importance for many of these items is likely a byproduct of the non interactive world. Fable is best described as a Hack and slash game, with some RPG elements to it, and the ability to be good and/or evil. The promises of a huge “real” world, of intelligent NPC’s, and a number of other things that Petter Molyneux ambitioned were never fullfilled.

While Graphically impressive, Fable is hardly groundbreaking, and much less the greatest RPG of all time. As it stands right now, the game is really a ‘glorified’ hack and slash that tried hard to mix Zelda and Morrwind’s best qualities, but ended up being fairly inferior to both games. It is one thing to have great ideas and extraordinary ambitions, but it’s another to execute them well.

Gameplay: 6.0- If it weren’t for the leveling up system the game would be on the 4’s in this category. This is supposed to be an action RPG for godsakes! It needs to allow our avatar to have interaction with the environment. Ocarina clearly demonstrated this 7 years ago, and newer games like Morrowind have raised the bar. The combat system is also shallow, and simplistic.

Graphics: 9.5-GORGEOUS! It’s a shame that I can’t jump over the goddamned Three ft. tall fence, or swim. The ability to venture off the predetermined path would have added a whole new dimension to the game. Also, the load times in between areas are inexcusable, Naughty Dog has no Load times on the technically inferior PS2. The Character Models will get repetitive, and tiresome soon after you start playing.

Music: 8.5-The Acting is decent and the tunes fit perfectly in the context of the game.

Story: 4.0-The Story couldn’t have been simpler if blind monkeys would have been forced to write it. A complete shame for a game that had been in the development since the days when Sega was still on the console bussiness.

Addictiveness: 5.0- You might be compelled to played twice, if you want to play the good and evil mechanic to its fullest, but be warned, there are far better RPGs avaliable on the XBOX such as Jade Empire, Morrowind, KOTOR, and KOTOR II.

Overall: 6.0- Not a complete utter failure, but close to being one, especially since the hype for this game was so high. The lack of an interesting plot interactive environment, and fun challenging gameplay ultimately puts Fable within the average category. The following statement might break Lion Head Studios game designers’ hearts, but their 3+ years in the making “SUPER” RPG cannot hold a candle to the 7 year old Ocarina of Time.