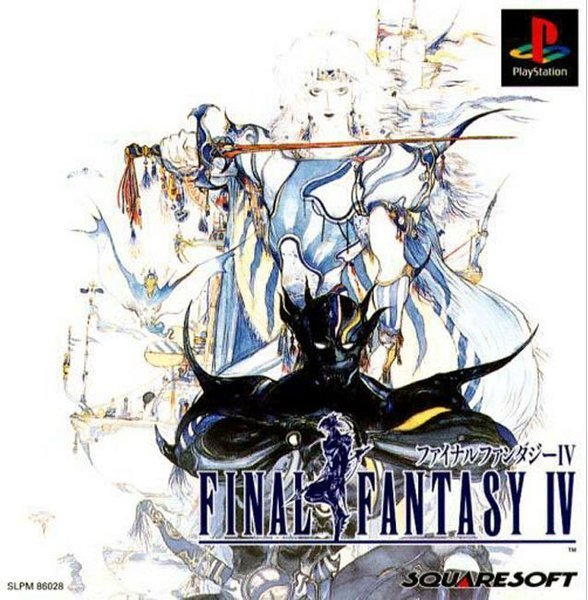 Final Fantasy IV (1991) was the turning point of the series; its predecessors before it focused more on presenting a huge epic quest rather than a compelling narrative. With FFIV Sakaguchi, and his crew finally managed to combine a compelling ( for a Final Fantasy game at the time) tale with a globe trotting quest. So in its time (before Lunar), FFIV was the best there was. Unfortunately, because this game was pretty much the first to get it ‘right’ (compelling story can coexist with epic quest), it means that all other RPGs after this one followed on its steps, and most surpassed it. So the game has aged rather poorly in terms of story.

If you pick up FFIV today in the Chronicles package, do not expect to play an ageless classic. Unlike Chrono Trigger, Everything in FFIV (except music) has been done better, in other newer RPGs that are out in the market. I dare say even some of the average RPGs today provide more entertainment value than this one.

Not the greatest story ever told

The Story of FFIV is a simple one by today’s standards. An evil man named Golbez is trying to collect all of the world’s crystals in order to destroy it. Of course, there is more behind Globez than meets the eye. Cecil the main character along with Kain, Rosa, Rydia, and Edge must stop him. A simple story this is indeed, however all the characters in the game have rather interesting back stories.

At the time that this game was released this was totally unheard of. This in turn would cause the game to be overrated in subsequent years in what storytelling was concerned, because many early 90s kids first experience with a cohesive story came in the form of FFIV (FFII in the US). However today in 2004, I could predict exactly where this story was going to end, and that is because I have seen similar stories to this tale over, and over again from the dozens, upon dozens of RPGs that I have played that came after it.

By today standards this is an unimpressive predictable tale, even if in it’s time (1991) it was revolutionary. The characters for example seem much more alive and real than the ones in the first three FF games, and that is because no two characters personality feels the same. For example Edge reads like an egotistic teenager who can’t find a girl, while Cid reads like an old drunken pilot, which is exactly what they are in the game. The game is full of twists and shockers which once upon a time, more than a decade ago were fresh. Today some of these twists seem awfully predictable and silly.

I would recommend most players to approach FFIV’s story as an educational experience to appreciate how far the FF series, and the RPG genre in general has come since the late 80’s early 90’s.

Musically the game is superior to its predecessors, but it’s surpassed by the rest of the series music and other modern game music. Still this is Nobuo Uematsu (Series composer) almost entering his prime (FFV-FFX), the musical compositions are the only aspect in the game that even today remains competitive, and entertaining. Like in all FFs, a lot of the tunes here can still be heard in the newer Fantasies, only that now they sound much better of course.

Graphically the game was no doubt a marvel in the early nineties but against some of the later great SNES RPGs, the game looks a bit dated specially when compared to Chrono Trigger, and FFVI. The sprites in here are quite small, and the backgrounds not as realistic and detailed, yet the RPG Hardcore fans will be able to look past this and enjoy the rest of the game. 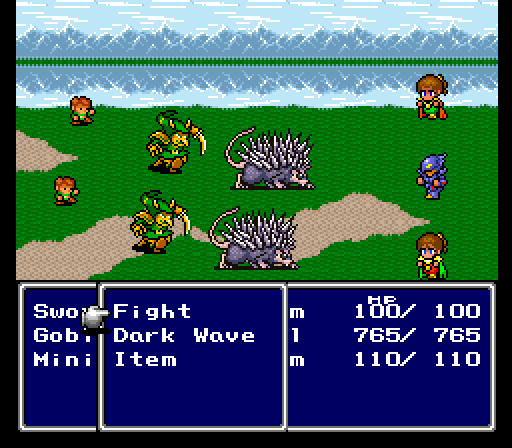 Gameplay wise the game makes leaps forwards from the first three Final Fantasies, by refining the active battle system, and adding more hidden secrets for dedicated players who bother to search every nook and cranny of the game. The battle system offers different classes of characters that are not customizable, for example: Kain is a Dragoon and his attacks and abilities are already set, you will only earn new abilities by leveling up, you have no control of what spell your characters will learn for they have already been set. This system allows up to five party members in the battle screen at once, however while a leap from the previous iterations, FFIV’s battle system is really nothing more than a slightly more advanced version of FFI’s. The Active Time Battle system in which time keeps running for both enemies and party members even while taking turns is the true innovation for this game to the series itself.

The difficulty of the game is about average, however expect to spend the vast majority of the 30-35 hours it will take to finish doing long boring leveling up sessions.

FFIV has the blessing of being re-released in the FF Chronicles package alongside  Chrono Trigger, because honestly without the excellent Trigger, FFIV would not be able to hold itself in today’s market. The game sadly lacks any rewards for finishing it (Bonus Gallery and Audio menus etc.), but it’s worth a look to appreciate the beginnings of the FF’s narrative structure that the recent games have followed, and mastered. Mastered, is the key word here, the narrative while some what entertaining seems amateurish at times, maybe I have just been spoiled by playing all those other newer RPGs.

A masterpiece in its time, but a mildly entertaining and somewhat average RPG by today’s standards. A worthy piece of software to invest your time with after finishing Chrono Trigger.

Gameplay: 7.0-In its day I am sure this was revolutionary but today the long leveling up battle sessions are tedious, repetitive, and sleep inducing. Gets a 7 here more out of my respect for the series than anything else.

Graphics: 8.0-One of the better looking 16-Bit RPGs, the visuals however are still far below the quality of FFVI and Chrono Trigger, which is not a bad thing at all.

Music: 9.0-Out dated sound? Yes. Out dated Compositions? No. This was Uematsu about to reach his prime.

Story: 7.0- An amazing tale for a game in its time…today however, corny and predictable. Gets the 7 here because I took the fact that this is a 1991 game into consideration, today this would have earned a 3.0.

Addictiveness: 6.0-No need to play this twice, it has a couple of side quests (if you can call them that) to earn secret summons and weapons that can extend the hours of play time.

Overall: 7.5-Chrono Trigger this game is not, but it comes packed with it in the FF Chronicles collectors package. Since Chrono Trigger is one of the best games of all time, this package is a must buy, think of FFIV as the free gift from Square for buying Chrono Trigger, and enjoy it for what it is. The game that began the tradition of strong storytelling in RPGs.