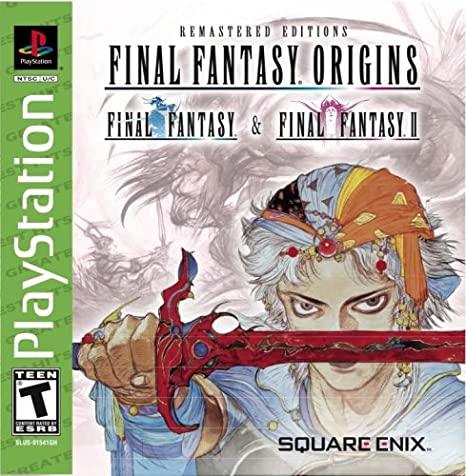 And so, almost seven years after playing the Legendary Final Fantasy VII, I found myself finishing the game that started it all, the original Final Fantasy. Oh what irony, in 1987 the Final Fantasy series was born on the NES, and a decade later in 1997 Final Fantasy VII in PS1 (considered by many as the finest game in the series) finally managed to bring the series, and JRPGs into the mainstream consciousness. So how did it feel to go back to the genre’s roots?

Final Fantasy (1987) is a Simplistic Experience

Final Fantasy is much simpler than the modern Final Fantasies. Obviously, in its time, the game was innovative, however, today almost 17 years after its release the game feels like Final Fantasy “lite”. Make no mistake the game is still worthy of a play-through for those who haven’t experienced it, and I figure most FF fans haven’t, since as I stated before, the series became the multimillion success that it is today only after FFVII opened people’s eyes to the JRPG world.

Graphically, the version of the game that I played (Origins for PS1) looks like a good SNES RPG, even though FFVI looks better. Keep an open mind that these are primitive graphics, and you won’t have any trouble with it. I never had any problems with old 2-D games, that is the reason why I still play old school RPGs, and find some enjoyment in them. 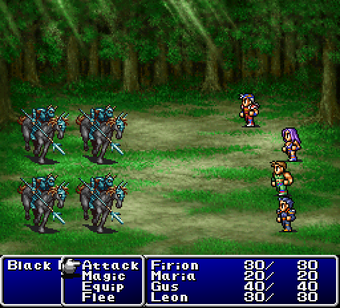 RPGs are all about story, music and exploration. I must say that of course Final Fantasy looks better than your average SNES RPG simply because designer Yoshitaka Amano is a genius, but good looks are taken for granted with the FF series any ways. Therefore the monster and character artwork is top notch as expected.

A 101 Course in Story Telling

The Story? Well, there is a simple basic plot, though “simple” is not a word used too often with the FF series plot lines, it is the word that best describes FFI’s story. The world in Final Fantasy is in big trouble because the light of the four crystals has been extinguished. The people are scared, and yet they remain hopeful that the prophecy of the four warriors of light coming to restore the light to the crystals will come to pass.

Naturally, the player control these four warriors of light at the start of the story in the Kingdom of Cornelia. After that, the game just takes you on a repetitive pattern  of town to dungeon, to another town, and then to another dungeon etc.

There is no character development, the characters have no back ground, no nothing, so it is unclear how they met with each other, and how they got their necklaces with the crystals. Unfortunately none of this is ever resolved. The developers in that era probably weren’t too focused on story telling , and rather decided to focus on the game’s gameplay.

There is only one plot twist, and it happens in the final dungeon, so story is not the drive force behind FF1, exploration is. However the plot twist was somewhat creative if you consider that this is coming from 1987.

A Series Establishes its Foundations

The gameplay in FF1 is perhaps the key to the success it had. The game definitely gives you a sense of  more freedom than let’s say FFX. In this game we begin to see the humble beginnings of the over world map in JRPGs. I shouldn’t use the word ‘humble’ to describe it, after all, the game world is pretty big, at first you will to travel through it on foot, which becomes tiresome after a while since it takes many minutes to get from one place to the next. However, you will eventually get a ship, a canoe, and the always cool Air ship.

While there is plenty to explore, the core gameplay of the game is JRPG gaming at its most basic. A lot of places to go to, but little to interact with, and little reward for exploring. There are no sidequests, and no hidden bonuses except some weapons, and accessories that you can find in the treasure chests located inside the many dungeons of the game.

However, unlike most modern RPGs. In order to be able to move the plot in the game, you need to literally talk to every NPC that you find in the towns, and dungeons. NPCs, which unfortunately some times only give you vague clues as to where to go. Do not be surprised if you find your self wandering the world for hours with out a clue of what to do next.

This was partially frustrating but bearable; at least in this game I had to work hard to keep the story moving, so while frustrating it was also satisfying to a degree.

The exploration would have been more enjoyable had there been less random battles. Battles are fought in – the by now – traditional turn-based system, in which the party and its enemies take turns attacking each other.

Surprisingly, the battle is very similar what we have seen through the entire series – all the way through FFIX. So if you have played any FF up to and including FFIX, you will be right at home. Of course like everything else in Final Fantasy 1 the battle system while nearly identical to its successors in execution, is turn based fighting at its most basic.

While in battle you can only choose one of five commands, the commands are Attack (you simply hack at the enemy with what ever weapon you have equipped), Magic (You choose a magic spell to either attack or help your party), Items (the most useless command in battle and you will see why soon), Equip (you can equip weapons and armor) and Flee (escape from battle).

If you have a Monk or a Knight however you cannot use magic, but more on that later. First things first, there is only one recovery item in this game and that is the potion. They only restore about 20 HP so in the later stages of the game or even halfway through they become pretty much useless. Second, there are no Phoenix Downs. Meaning that if you only have one white Mage on your party (And I recommend that) and it gets killed, you better leave the dungeon and get to a sanctuary. Because you wont be able to revive your other characters if they get KO’d, and in the last dungeon of the game this means that you have to reset, and use the memo file option. This cumbersome process can get quite annoying. Your characters statistical progression solely depend, of course, on leveling up.

So, I didn’t particularly like the lack of items, the save system (you can only save on INNs and  the overworld provided you have Cottage or Tent) and perhaps mostly I didn’t like the fact that some character classes were useless.

Character classes? Yes, when you start a new game you are given an option, to pick a class and a name for each member of your party. The classes are: Warrior, Monk, Thief, Red Mage, and Black Mage. The Monk class is the most worthless. The Warriors are the best offensive and defensive characters, so a safe combination will be to choose 3 Warriors and one White Mage (For recovery purposes) or 2 Warriors and 2 White Mages. This character system while to a degree poorly executed, would later be polished, and extended on FFV to create that game’s magnificent Job Class system.

As I mentioned before, I did not like the frustrating save system. In a long dungeon, like that hellish last dungeon for example, you will not be able to save before a boss battle onto a memory card, you can save to a memo file though, but that becomes useless if you have to go somewhere and have to turn your PS off. Since Final Fantasy Origins Package (FF1 and 2) are slightly enhanced ports of their original versions it wouldn’t have been to much to ask for Square to add a more modern Save feature to the game.

Musically the game sounds much better than its original NES incarnation did, the compositions shine. While there is not too much variety, I immediately recognized the classic tunes that have amazed my ears through out the years in other more modern Final Fantasies. Uematsu was always a genius I guess.

Being that this is a collectors remake, Square added a bonus menu in the game in which you can see the bestiary and artwork for the game and even a secret bonus mode that can be opened by finishing the game twice (Which I doubt anyone will want to do after spending close to thirty hours of random battles). There is also the inclusion of an easy mode (If you know what is good for you play it in the easy mode).

So Final Fantasy 1 is Final Fantasy at its most basic. This isn’t bad considering that Final Fantasy was indeed the base and the foundation on which the series’s Mega-popular legacy was built in. Yet, while ground braking in its time, it had many flaws, and problems that thankfully were fixed and solved during the next nine installments that followed.

Lots of exploration and solid battle system make it special, lack of rewards for exploring, over abundance of random encounters, lack of healing items, and lack of a true save system in dungeons however cloud the good things it does.

The score takes into account into consideration the fact that the remake is SNES technology.

Not many tracks, but this not strange for the era, but what the music in the game is fantastic!

In its hey day it was probably in the 9s, but today I give it a 7 and that might be out of respect for the series as a whole, I wont play it twice ok maybe if one day I get bored, and have nothing else to do. After all, there is that secret bonus gallery to unlock.

A solid game that began one of the most respected game series of all time.