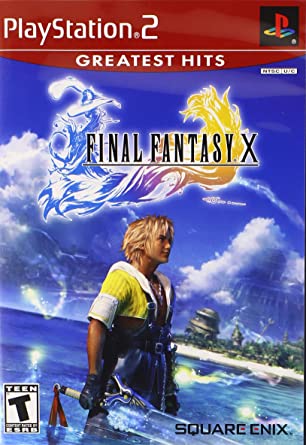 The best part of Final Fantasy X is its love story; thus I’ll save the best for the last. So, I’ll start by reviewing the graphics.

Graphically only one word suits Final Fantasy X perfectly: Stunning! I have never seen such a beautiful game before (With the possible exception of Skies of Arcadia, and Ocarina of Time in its time) The backgrounds are amazing, and you can see individual blades of grass moving, ripples and real time reflections on the water surfaces. 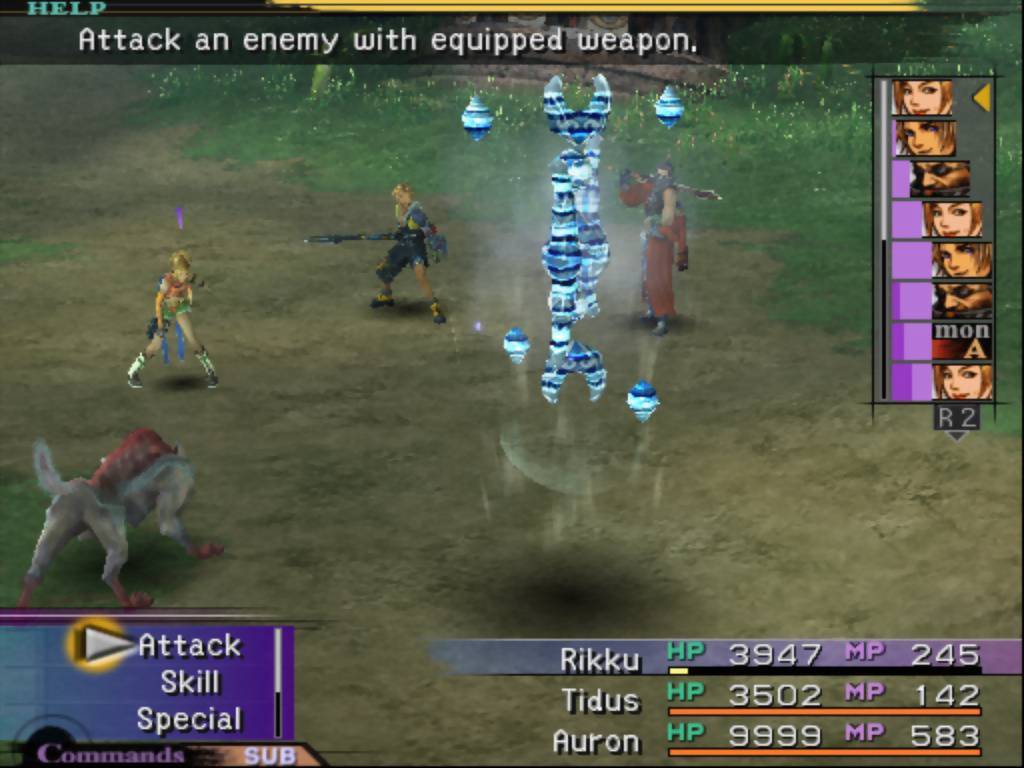 The characters themselves look almost as good as those seen in the FMVs, their lips move and sometimes they can even show facial expressions! The monsters, and the dungeons in this game are filled with details, details that even the most gorgeous PC games don’t show. The artists did a wonderful job.

Even more stunning than the in-game graphics are the CG cinemas, or as we call them FMVs, here is where Square animation artists show their brilliance, the characters look almost real, the way they move, smile, cry, etc. is simply breathtaking. Final Fantasy X is officially the best-looking RPG on the PS2.

However, as good as the graphics are, the camera still remains preset, meaning you cant control it at will. So while the worlds are rendered in 3-D, the exploration aspect of the game it remains very limited like in past FFs. Even less when you consider that there is no over world map.

While I won’t flame Square here for not going with a Free Roaming Action camera ala Zelda and Skies of Arcadia, it would have truly added to the experience if you could see the world from the characters eyes.

Skies of Arcadia and Ocarina of Time could successfully submerge the player in their game world within seconds of play thanks to their ‘Free Camera’, FFX failed to convince me that I was actually on Spira.

Moving on to the gameplay, I will start by saying that Final Fantasy X has the best battle system of any Final Fantasy game. Now you can see on the screen when it is the boss or enemies’ turn to attack, and when it’s your party’s turn to attack. This adds lots of strategy, since you have to think about what you are going to do for each turn with each character. Also, new to the series is the ability to use all of your party in each battle.

This is how that system works, you can only have three party members on the battle field at once, but at any time during the battle you can change characters by substitution. It’s just as simple as that. If you have Tidus on the field along with Yuna and Wakka, and you want to put Auron in for Tidus, just wait for Tidus’ turn, and replace Tidus with Auron.

Leveling up by levels is now gone. Whether this is a good thing or a bad thing, you will have to decide for yourself. As a purist I was very uncomfortable with this system at first, but as I progressed I found it refreshing and actually superior in someways to the old leveling up system.

The way to raise your statistics now is with the sphere grid, a giant board filled with attributes and abilities. You move across the grid with SP, (sphere points), which you will get after receiving the necessary amount of AP, (Ability points), think of AP as EXP points and think of SP as actual levels. You get AP from winning battles. I believe this is the evolution in Gameplay the series has been needing for a long time.In the end I was pleased with the sphere grid.

On the negative side, there is a disappearance of the over world map in this game. Why Square decided that the World Map wasn’t necessary is beyond me. All this does is limit exploration, and it takes away from the game. Instead, the game has a Grandia feel to it. Of course Grandia is a great game, but unfortunately FFX decided to steal one of the worst things from Grandia’s gameplay and that was the lack of a rendered world map.

Other strong points in the gameplay are sub-quests like the monster arena and the Al Bhed language game. Also I enjoyed the fact that in the Stadium in Luca you can purchase songs that you have heard during the game, and FMVs as well. So gone are the days where you used to keep save files of save points that were next to a huge cinematic scene in order to view the scene later.

As far as the music is concerned, Nobuo Uematsu has done it again. Magnificent compositions accompany this equally magnificent tale, giving Final Fantasy X’s story powerful emotional moments that other wise wouldn’t had been as astounding. “Suteki de ne” in its orchestrated version, the song that plays at the credits it’s the most beautiful songs that  I have ever heard.

The orchestrated piece that plays during the amazing heart breaking finale is powerful as well. I have the original soundtrack, and I listen to that song every day, this could be by far Uematsu’s best work. However since all the FF series music is so good, it would be a very hard task to pick which is the best soundtrack.

Like I said before, I saved the best for the last …The Story.

Final Fantasy X story starts with Tidus the star blitz ball player of the Zanarkand Abes, who during a game is transported by Sin (A godzilla sized monster) a thousand years into the future. Tidus then finds himself in a different world. A world whose  only similarity to his own is the game of blitz ball.

Soon after that he meets with Yuna and her crew of guardians, and they start their pilgrimage towards summoning the final Aeon to defeat Sin. Final Fantasy X story doesn’t hook you right off the bat, instead it gets better, and better as it goes, is Final Fantasy X story better than FFVII’s? It is not as fascinating.  FFVII’s  Sci-Fi story was great because of its characters, and their complicated past, coupled with the many shocking moments that the game had.

Final Fantasy X’s story is great because while the story seems simple at first glance (there are some clues in the story that give you an idea of what’s going to happen at some parts) going deeper into it, reveals a complicated story. Complicated, and yet so simple, as a love story Final Fantasy X succeeds beautifully, this is what FFVIII should have been.

This is not the story to end all stories that FFVII was, but there is one aspect on the story that takes it to the level of FFVII’s: And that’s FFX’s ability to pull at your heartstrings. The closest I ever came to crying in a game was in a particular scene in FFVII, where my eyes got watery but I didn’t cry, however, that was before I experienced Final Fantasy X.

There was this part in Final Fantasy X where I shed a tear, it was just an in-game scene, then at the very end of the game there was this scene where I cried. I was almost chocking, words couldn’t even come out of my mouth, I can’t even describe what I felt because words are not enough. It was something special; it was in that moment that I realized that Final Fantasy X was one of the greatest games I had ever played. It was this moment that made me overlook the fact that the game didn’t have a strong villain, it was this moment that made me realize that this was not just a game, but an experience.

However, it if it weren’t for its love story, FFX’s tale would be just a good one. The Villain isn’t too threatening. Sure Sin is huge Godzilla like monster, but he had no real interaction with the cast until the latter part of the game.

The Villain that is present its really useless and it can be argued that his presence in the game was unnecessary.

But the love story is so good that anything else in the game becomes second nature to it, I think this game’s plot would have done very well as a film.

The words magnificent, stunning, amazing, brilliant, beautiful, perfect are all over this review however even those words cannot do justice to Final Fantasy X, words can’t describe this experience, Final Fantasy X is something you must experience yourself.

Gameplay: 9.0-No world map, less mini-games than in previous efforts, but on the flip side the game has the best Battle System in the series and the Sphere Grid is refreshing and useful. The series gameplay has evolved.

Graphics: 9.5- Could have gotten a ten had the player been allowed to control the camera at will, the lack of a rendered World Map also hurt the score.

Music: 9.5-On par with FFVI, and FFVII . It’s sad that this might be Uematsu’s last effort for this series.

Story: 9.5 -An argument can be made that the plot is not that strong, but the love story in this game is unrivaled.

Replay Value: 9.0- Not that many minigames, but the story and graphics will keep you playing and will even make a replay the game worth it. If only to rematch those gorgeous FMVs!

Overall:9.5-Has Classic written all over it, the lack of a world map proved to be the only serious hinderance in this game.