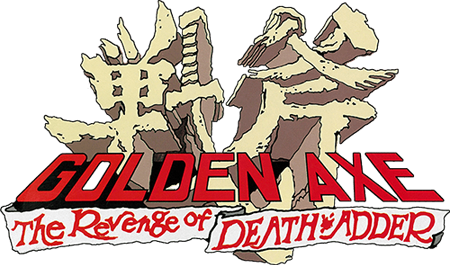 There was a period in my life when my brothers and I competed heavily in fighting games. Street Fighter, Super Chinese Fighter, Tekken, and a few others kept us occupied for hours on end. When we eventually tired of battling each other, we often transitioned to playing co-op games.

An Interesting Cast of Adventurers

The characters in beat ‘em ups are possibly the most important aspect of these games. A visually dull character or a posse of too similar characters can cause them to feel one dimensional or simply make them not fun to play. Thankfully, Golden Axe is no slouch when it comes to its playable cast.

Stern “the barbarian” appears as though he was ripped right out of the Conan the Barbarian franchise, touting a two-handed great sword and glistening pecs. Next, we have Trix, a nimble elf who wields a pitchfork. Goah is the third playable character. He is a giant who carries carries a great axe as if it were a hatchet. He also transports the dwarf Gilius on his back (a character from one of the previous games). Finally, Dora the centauress. Dora utilizes a staff that appears as if it were straight out of American Gladiators and even utilizes her hooves in some combos, a nice detail.

These characters are quite different in appearance while also having unique magic abilities and interesting combat animations, making them each feel special. I didn’t notice one adventurer being considerably stronger than the others, but I did favor certain characters’ magic. My favorite was probably Stern’s. He calls forth an incredibly powerful torrent of flame across the screen, scorching the earth and his enemies. Sometimes this even plays a brief animation of an enemy being melted Raiders of the Lost Ark style.

While Stern’s magic useful, Goah’s has to be the most intimidating. Rather than calling forth fire, Goah and Gilius summon a large skull that breaths petrifying mist on enemies. It is awesome to watch, though it requires a significant amount of mana.

Dora’s magic is less interesting. It can be used many times but is only a simple lighting strike that deals low damage. Trix’s magic is more supportive. It grows apples from a tree that can fully heal himself or teammates.

Golden Axe’s gameplay is enjoyable. Like other beat ‘em ups, Golden Axe assails the player with various enemies. Dwarves, giants, skeletons, and a slew of magical creatures will try to take you down on your quest to vanquish Death Adder.

The gameplay is simple: defeat everyone on the screen and move on to the next one. There are pickups like food and magic bottles to refill health and mana. There are also deployed weapon emplacements like ballista and catapults. These emplacements only have a few uses each; however, they are incredibly powerful and can easily wipe a few enemies before running out of ammo.

One of Golden Axe’s more interesting aspects is the ability to control “vehicles” like in the Metal Slug games. These “vehicles” include huge praying mantises that either spew flames or slash enemies. There are even giant scorpions and bone dragons to ride. You can only be hit three times on these beasts before they run away, but they do have the ability to carry the otherwise stationary weapon emplacements on them, allowing you to move and shoot.

The variety of enemies and changing locales keep the game fresh for its runtime, which for me was about an hour. There are even a couple points where you can choose between branching paths. However, over the course of the game, you will eventually play through the unchosen path if you are playing the arcade version.

Overall, Golden Axe: The Revenge of Death Adder was an entertaining game. Its variety and characters keep the gameplay interesting. I actually wanted the game to be longer, something I normally don’t wish from beat ‘em ups. I rate the game a solid 8/10, and it makes me want to play beat ‘em ups more often.