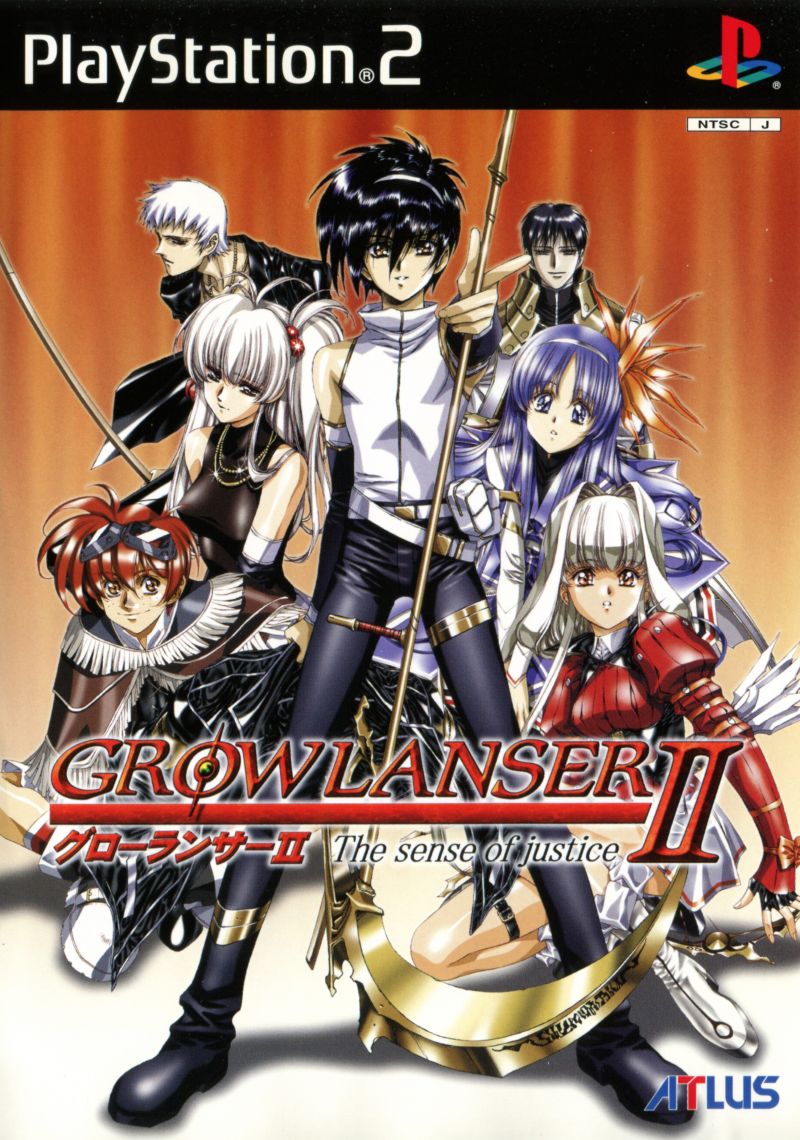 Growlanser II: The Sense of Justice is part of the newest Working Designs RPG compilation on the market, which is named Growlanser Generations. The package includes the aforementioned game, and Growlanser III: The Dual Darkness. Why Growlanser 1 wasn’t included in this compilation, is anyone’s guess. But I will not dwell into that here.

Working Designs is known for bringing to the States some of the very best Japanese RPGs on the market (Two of their games Alundra and Lunar 2 Eternal Blue are in my all time top ten). Thus, as expected, Growlanser Generations is a high quality package. Yet, Growlanser II in most aspects seems like a rather average RPG.

While I haven’t yet touched Growlanser III. I just finished Growlanser II. I will say right now that while it was an entertainingly short RPG, it isn’t the kind of game that will instantly earn the cult classic name tag that other Working Designs RPGs have earned over the years.

At its heart, Growlanser II is really a strategy RPG. The battles play like any turn based RPG before it, you make a selection from an Attack Menu, in which you can move through the battle field, attack, defend, cast a magic spell or use a Tech skill. After making the selection you wait for your characters to execute the action.

The strategy part comes in the fact that you just can’t simply level up and attack with powerful attacks to win the battles. Most boss battles have rather challenging ‘challenges’ to deal with. For example, there is one battle where you have to get your characters across a field floor that is collapsing, if one of your seven party characters falls through the floor, the game ends. In other battles you have to be able to contain a certain amount of enemies in a field before they can escape the battle.

It is very important to think beforehand what course of action you are going to take. Of course, strategy alone won’t win the day. The player (as always) needs to spend some time fighting random battles on the map screen in order to properly level up the characters.

A lot of the success in battles will depend on how you equip Rings. Each character can have one ring equipped; the best rings are the ones that boost your stats while at the same time allowing you to carry high level Gems. Each Ring has three slots to carry gems, each slot has a number lets say 9-6-4 this means you can equip a level 9 gem or lower on the top spot, a level 6 gem or lower in the middle spot and so forth.

Rings have to be earned in battles, while Gems can be bought at shops. In some battles it is crucial to have the right selection of gems equipped, so be very careful.

Fortunately, the game is pretty short, about 20 hours. So, leveling up won’t turn into a major drag. However, most of those boss battles can go for pretty long, some times even 20 minutes long, so it is good that the game has a ‘save game’ feature while in battle. Just press the Square button while in the middle of a match and you can save your progress. All in all, the battle system in Growlanser II is one of the few things that the game does very well.

Unfortunately, besides the polished battle system, there is not much more to get overly exited about if you have been playing RPGs for a long time. The Story is about war and conflict and there are many interesting characters, but the plot never goes deeply into any of them. Wen Cruz, who is sort of the main character, wants to be an Imperial knight. Therefore, he decides to join the academy, where slowly, he becomes involved in a big conflict where he meets the rest of the cast and eventually embarks on a world saving quest.

The only saving grace of the plot is that it is not predictable, as there are two or three completely shocking twists. But other than that, while the characters have tons of personality, you never get to really know them. The way the game ends gives you the impression that maybe Growlanser IV (Growlanser III has a different cast of characters set in a different world) will keep following Wein’s exploits.

However, I was disappointed by the game’s uninspiring ending, while the plot was never too deep I was expecting a bit more from the story specially when the villain and Wein had an interesting relationship. The story truly feels like half done.

The story is pretty linear, as there is no real time 3-D world map, instead your characters walk through dots on the map screen. You can enter towns whole on this screen to chat with NPCs and stock on supplies. However, you CANNOT walk while in the towns or explore anything in this game. Everything in the game is done through menus. The only time you have control over your party members is during the battles. So, some players might get bored. I kept playing because while the story was a bit bland it had enough things going around it to keep me going.

Graphically, this is a game that belonged in the PS1/Saturn era, and even then, it would have been technically an under-whelming game. The characters are made up of high quality sprites, but the battle stages are done in primitive pre-rendered back grounds. These pre-rendered backgrounds are also used for town graphics and in any other scenes where you actually can see your party on screen. The world map, like I said before, consists of a flat hand-drawn map with dots. So, while the game is Visually a stinker, the character art work is top notch. 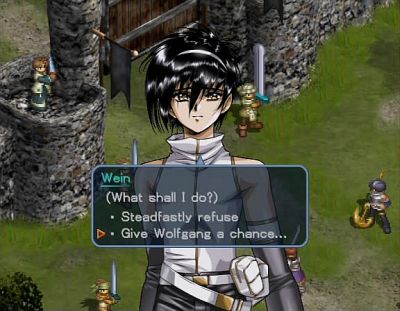 Like in Atlus’ Thousand Arms, when the characters speak to each other big anime drawings appear on the screen, it is in this instances that one can appreciate the talented character designers from Atlus and Careersoft (who developed the game, Working Designs is the publisher).

Sound Wise, while working designs made it a point to find quality actors, Maximillian, Wolfgang, Xenos, Hans and the female cast, are the only ones who deliver a solid performance. Wein sounds too weird for me. The voice acting in the game is merely okay.

The music is average stuff, while the vocal ending theme that plays at the credits is solid, the rest of the music isn’t worth listening to. Growlanser II, which was originally released in Japan in 1999, has all the makings of a low budget RPG.

In what packaging is concerned, Working Designs offered two options a Deluxe package and a standard version, the standard version just includes the two game two disc set with an instruction booklet, which is the standard way of delivering games on the market. However, being that I am such a collector, I bought the deluxe version which has all the goodies that one has come to expect from Working Designs.

This time around, however, the package doesn’t feel as tight as it did in Lunar 2. The package includes a Soundtrack , a color instruction manual that lacked interviews and things of the sort, an okay looking chain with a rusty looking ring, and a completely stupid deck of cards. At first I thought the cards featured Character art work as the case in the back of the deluxe package showed. However, I was EXTREMELY disappointed when I opened my deck of cards and I saw that the cards were standard American playing cards. If I wanted generic playing cards, I would buy them for a buck at the local Walmart, so thanks Working Designs, but no thanks this time.

The entire package would have been a failure of catastrophic proportions (at least by Working Designs high standards), if it wasn’t for the Elegant “Silver” watch that the package included. Yeah, I know that the watch isn’t made of real silver, but it looks real enough to fool people.

However, that being said I paid 80 big ones for that package and I don’t feel so far that the packaging was worth that much, specially considering that Growlanser II is a fairly average game, maybe Growlanser III will make it all worth while.

Growlanser II itself, however, stands as mildly interesting strategy RPG, that only collectors and RPG hardcore fans should play. Every one else will probably find the game primitive and boring.

Gameplay: 7.0-It’s a pure Strategy RPG, and the combat and leveling up system is solid.

Graphics: 5.0-Harkens back to the PS1/Saturn era and even in that era it would have been a sub-par looking game.

Story: 6.0-Interesting enough to keep me playing, but a bit bland and shallow. No real character development ever happens during the game.

Addictiveness: 6.0-Finish it once and that’s it, it’s done. If you are a masochist the try to unlock Sandra’s quest for what is worth, also the are multiple endings depending on what choices you make during some conversations.

Overall: 6.0-A polished battle system and a mildly interesting story keep Growlanser II two from sinking in to the dreaded 5.0 to 4.0 territory.