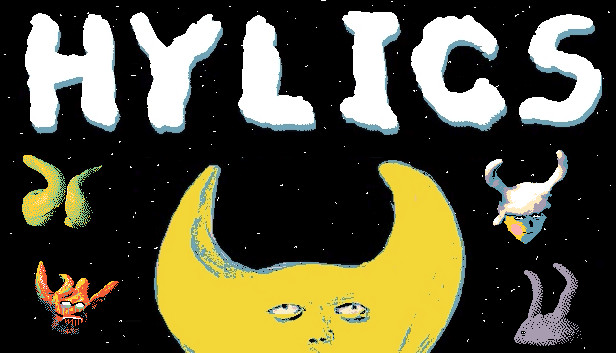 My initial introduction to the Hylics series was by watching Hylics 2’s trailers on Youtube. This RPG’s strange and interesting graphics captured my attention, and I enjoyed the music so much I listened to the soundtrack on repeat once it was released on Mason Lindroth’s (the creator) YouTube channel.

For a long time, I desired to enter the world of Hylics, and when I discovered the first Hylics was only $3 on Steam, I dove in headfirst. What better place to start than the beginning.

A strange aspect of Hylics is that its story is almost nonexistent, mainly caused by the game’s dialogue being randomly generated. NPCs will spout random strings of text that appear as though they have meaning, however, in reality they are meaningless. When talking to specific NPCs there is some premade dialogue, but most is simply nonsense.

You start the game as the main protagonist, Wayne, and are instructed to defeat the King of the Moon, Gibby. Other than this, there is little relevant explanation why Wayne must defeat Gibby or even go adventuring in the first place.

You can add up to three other adventurers, but their reasons for joining you are shallow at best. This is not a bad thing as Hylics is a short game, beatable in under four hours. I feel as though deep exposition on the world and characters of Hylics would have detracted from its cryptic nature and possibly Hylics’ best feature, its art style.

The first thing I noticed about Hylics was the little red dragon icon that is used for RPG Maker, Hylics was made in RPG Maker VX Ace to be precise. I have played RPG Maker games in the past and mainly experienced the same/similar assets reused throughout all of them to some degree. This was not the case with Hylics.

Except for a few weapon and equipment icons, Hylics has fully custom art. The enemies, attacks, abilities, and locations are all unique. It is refreshing to see this amount of effort expended on art when premade assets are so readily available.

Most or everything seen in Hylics is claymation. Enemies and objects within the world have all been animated using clay, making the world so much more interesting and dynamic than any RPG I have played before. Playing Hylics never felt like I was playing a game on the RPG Maker engine—a testament to how special this game truly is.

My favorite pieces of art are the ability and item animations. They are incredible and peerless. My favorite animation is the juice box item. When used, a typical juice box appears in front of the player. It spins around and is crushed as if the player is sucking down the delicious juice with great ferocity. All items and abilities have these similar awesome animations, making each enjoyable.

Though I do prefer the sequel’s soundtrack more, Hylics music is good in its own right. Most of its tracks are more mellow than other RPG titles which fits the relaxed world of Hylics; however, there are some eerie tracks that help develop tension when exploring the visually jarring locales. If you are interested, take a listen below.

The sound design for combat is very well executed. Abilities all have different sounds that coordinate with their interesting animations. My favorite is the sound used for the basic attack. Instead of a slashing sound or gun shot, the basic attack utilizes a surprisingly simple, but brilliant finger snap.

The sound effect suits its animation—a hand snapping its fingers. It is so simplistic, but so powerful and one of a kind. I never get bored of watching an enemy crumble after a killing-blow snap.

Hylics progression system is different than other JRPG style games I have played. There is no leveling. The protagonists increase their health and mana by grinding the meat of their enemies and drinking from water coolers. This means leveling boils down to fighting non-respawning enemies to increase “flesh” (hp) and drinking water to increase “will” (mana).

In terms of abilities, each character starts with one or two unique skills, called gestures. However, each party member learns the same gesture at the same time. How do they learn these skills? By watching television of course. TVs are scattered throughout the world and provide the game’s cast new and powerful abilities.

Similar to other JRPGs, party members can equip a variety of different items. These items increase damage and other stats. Some are found throughout the world while others are bought at the main city.

There are a couple annoying aspects of the game’s progression system. First, if you increase your flesh or will, party members that have not yet joined your party will lose out on those stat increases. Secondly, if you watch a television without a full party, you will have to backtrack and watch it again with the missing member in order for them to obtain that ability. These are minor gripes as combat is easily completable without max stats and TVs are easy to locate.

Overall, I really enjoyed playing Hylics. It kept my full attention, being well worth the $3 I paid and three and a half hours spent to complete it. I score the game an 8/10. I cannot wait to dive into Hylics 2 and see how Mason Lindroth has improved his craft.