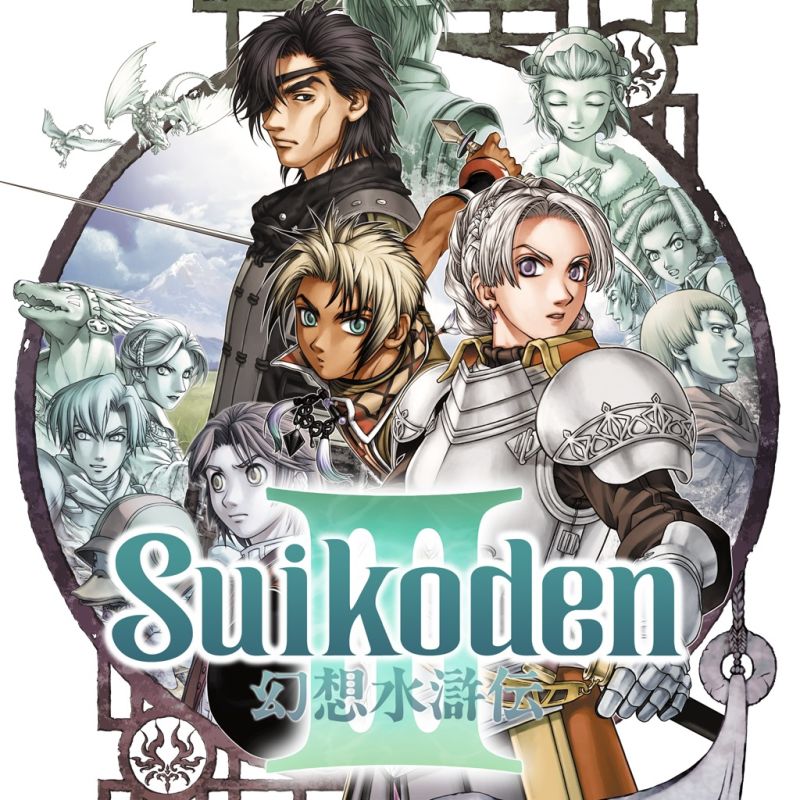 Speechless…That’s is how Suikoden 3 left me. I am one of the few who had played and finished the original Suikoden some 7-8 years ago. That game was good, it was one of the very first RPGs for the PS1 and it featured the at the time unprecedented ability to recruit 108 characters, to fight for you. It also featured a mature plot about war, betrayal, love and every thing one can come up with.

The game was good but not great even though the limited amount of copies released of the game has made it one of the most sought after and high priced classic RPGs out there. Ditto for Suikoden 2 which didn’t receive much critical praise and was swept under the rug by all the other flashier, better promoted and simply just better RPGs that were released on the PS1.

It is safe to say that Konami’s flagship RPG series hasn’t made exactly a huge splash, which is why it is comforting to know that, Konami has remained loyal to the series, and has released two more sequels Suikoden 3 and 4.

In this review I will examine the 3rd entry in the series which was released in 2002, 4 years after Suikoden 2. This time the system of choice for the installment was the PS2.

Any complaint I might have had with the first two installments, have been fixed by Suikoden 3. To start graphically the game has finally made the move into the 3rd dimension and with excellent results .

No the game won’t win any greatest looking game award, the budget required for something like that wasn’t put forth but the artistic style does the job and the graphics while not on par with FFX or Star Ocean 3, also have their moments as the outdoor back grounds are nothing short of impressive in terms of artistry. 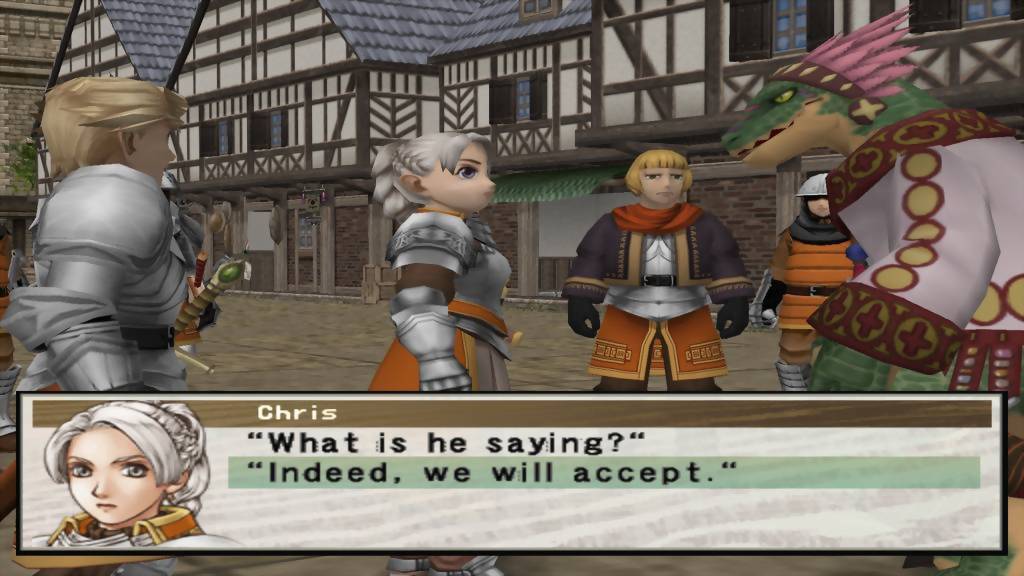 The characters design is also flawless, every one of the 108 characters you can recruit looks completely different, the faces are well drawn and the character models sport nice look armor and clothing. The one main gripe is that for a game that relies so heavily in the in game cut scenes the character animation is pretty stiff. No lip movement and other things of the sort are visible, the animation is pretty much on par with that of Skies of Arcadia.

The lack of the ability to rotate the camera like in Skies of Arcadia and in Star Ocean 3 however will subtract some points from the overall graphical score. Instead the game environments have more a FFX feel in which you can’t possibly get lost because you are pretty much walking on “railed” environments that lead you to the next point.

The Suikoden series has always featured good music, however Suikoden 3 breaks that tradition by actually featuring great music. The soundtrack is epic and well composed again is not high budget sounding but it doesn’t take a music buff to figure out that the compositions are excellent I love the track that plays while traversing the plains and the Almakinan Village song.

The music featured in the gorgeous anime intro is amazing, complete with a nice chorus that reminded me of a commercial that I saw once for an Anime movie which I can’t recall its name right now. While the sound effects are the standard fare and the Music is great I regret to say that the game doesn’t feature any voice acting. This was done probably for money saving reasons and because some developers are still stuck in the 16-32 bit era where the vast majority of RPGs were mute of voice acting.

Story wise is were Suikoden 3 truly shines, in fact in a way Suikoden 3 reinvents the way stories are told in RPGs thanks to the at the time (2002) innovative Trinity Sight System.

In this system you can actually tackle the story from any of the three perspectives initially available (there are a total of 6, the hidden three must be acquired by collecting characters). The three main characters in the game are Chris, Hugo and Geddoe. All of the characters are involved in the war between Zexen and the Grasslands. All the characters are in three different sides of the conflict, Chris a famous Zexen knight, Hugo the son of a chief of one of the Grasslands clans and Geddoe a mercenary of sorts, who doesn’t really favors any of the two sides and has his own mysterious reasons for his actions. The first three chapters of the story can be played in any order with any of the characters , of course after you finish chapter three with one character you will have to play with the others because after chapter 3 the story unifies, so the Trinity system is really not in place throughout the entire tale but it is there for the setup which takes a good portion of the game.

So you get too see the same scenario from three different points of view, with each side thinking they are doing the right thing. This system is brilliant for character development and it really teaches the players some moral lessons that maybe our world leaders today should pay attention too.

For example a big theme in the story here is that the enemy might be the enemy to your nation but in fact they are heroes to their people and just like you have a reason to fight them they also have a reason to fight you. So in other words no particular side is evil or good for that matter. This is one of the most awe-inspiring stories I have ever witnessed, each character is beautifully developed and this game proves that you do not need a melodramatic love story or a troubled hero with amnesia in order to have a great tale.

I am a love story lover, anything with a good love story gets props from me so I was pleasantly surprised that I loved Suikoden 3’s story even though the plot lacked a strong love sub plot.

Most of the care seems to have gone in to the story because the game play itself, is simple and mediocre at best.

Apart from the Trinity sight system and the ability to recruit 108 characters (each one with their own individual skills) there isn’t much to talk about in terms of creative and fresh gameplay.

You can have up to six characters in a party at one time, the six characters can battle in the field at once. The standard commands for turn based battle systems like Attack, Defend, Rune (magic in this game), item etc. are all present. In addition you can coordinate two or more characters to do combos which add a good deal of damage to enemies, but other than that the battle system is as simple and as tried as it gets.

Success in the game depends almost solely on leveling up, even though I must admit in some battles a good Strategy can save the day. Then there are also duels which play like rock paper scissors of a kind. But all in all if you level up a lot you will achieve success, and you better level up a lot cause some of the latter battles are very tough.

There is however a degree of customization that can be attained by teaching characters skills at a training center, in fact some of the most useful skills can only be learned at this centers. So after leveling up you will have to get to a training center in order to use the skill points to attain true progress, other wise your characters won’t improve much.

Exploration of the game is pretty much straight forward though obviously the more of the 108 characters you recruit the easier the game and the more useful your castle town will become. So checking every nook and cranny and talking to every one is a must. There is also wide variety of minigames available most of them are simple non awe inspiring stuff, but a nice touch nonetheless.

Suikoden 3 is quite a long game, and a satisfying adventure, with an epic plot, and great character development , it places itself amongst the five best RPGs in the PS2, a must buy if you are an RPG fan. True the story could have been a tad more dramatic and the battle system less frustrating and glitch free, but hey that’s what sequels are for.

Gameplay: 7.0-Typical RPG fare the ability to recruit 108 characters is a plus.

Graphics: 8.0-Not a great looking game but a good looking middle class RPG.

Music: 9.0-The composer did a great job awesome soundtrack now we want voice acting for the next one Konami.

Story: 9.5- There was no love story, no melodramatic villain and yet it is one of the most unforgettable tales I have seen. War, betrayal, fantasy everything is here.

Addictiveness: 7.0-It will keep you hooked the first time through plus one must get the 108 characters to be able to see and play though all the six different storylines.

Overall: 9.0-A great war story, decent graphics and beautiful music score makes it a must own for fans of the genre, the battles system fumbles a bit and the character customization system (skills) isn’t as deep as it could have been.