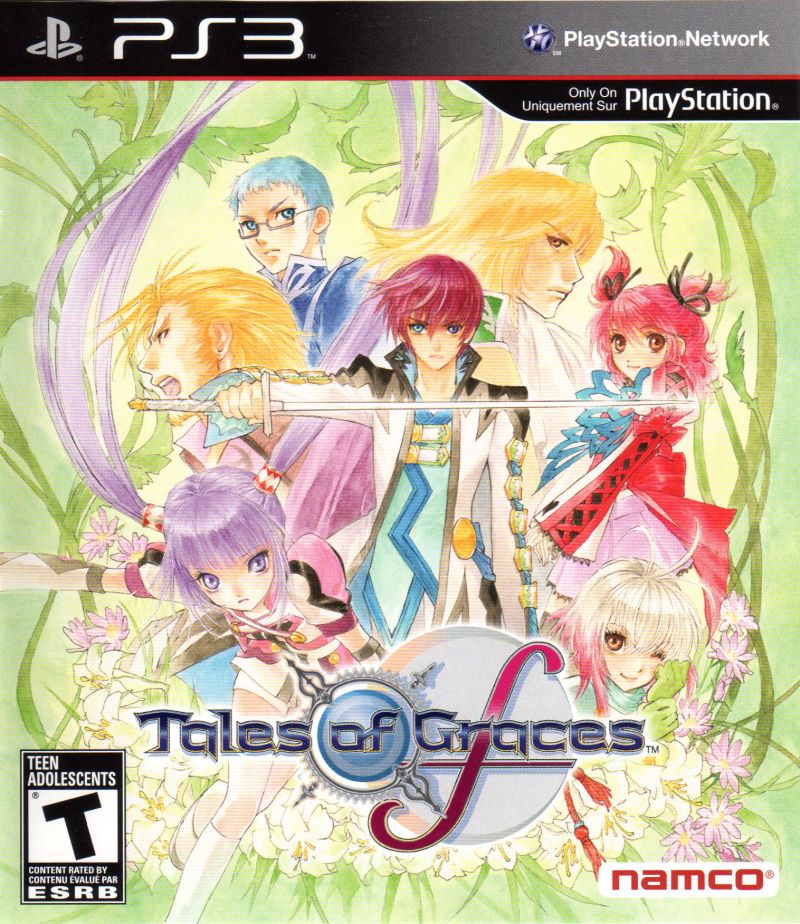 Absence makes the heart grow fonder…a wise saying if anything, that saying can explain the joy I felt throughout the long journey that I undertook as I played through 2009’s Tales of Graces F. Console J-RPGs have been a rare breed in the late ps3 to ps4 transition, rising costs and the rise of high quality western RPGs have all but turned to genre into an extinct one.

The late 90’s golden era now seems like it happened a whole lifetime ago. Final Fantasy hasn’t been Final Fantasy for more than a decade (since 2002), and while that particular series has kept up its production values, every title after FFXII has putting it bluntly… sucked. Namco’s Tales series has for the better part of last decade, and into 2016 kept fighting the good fight. The Tales series with a yearly to bi yearly iteration has become some what the “Call of Duty” of JRPGs, surprisingly though unlike FF, the Tales series has never had a sucky entry, and to be honest it hasn’t a FFVII masterpiece like entry either but at this point in the game you take what you get.

Suikoden, Grandia, Lunar, Chrono, Breath of Fire, Phantasy Star….those are the names of some of the big time RPG series that have for the most part died out in the last ten years. Namco’s Tale series hasn’t (Thankfully) met this fate for one simple reason: SIMPLICITY. Tales of Graces F looks a generation behind the times, like every other Tales game the production Values are largely low so it doesn’t cost as much to make as an FF caliber title. The Tales games never have to sell anywhere near a million copies in order to make a profit, so the games keep getting made.

The art work is very anime like, and very stylish so it keeps the visuals fresh even if they pale in comparison with some of Square’s PS3 offerings. For my part I enjoyed ToG’s visuals throughout, as I am an anime fan, and I suspect most of the people who buy the game will also enjoy the visuals because the series has a niche fan base that precisely wants a good old fashion JRPG with cute anime characters. 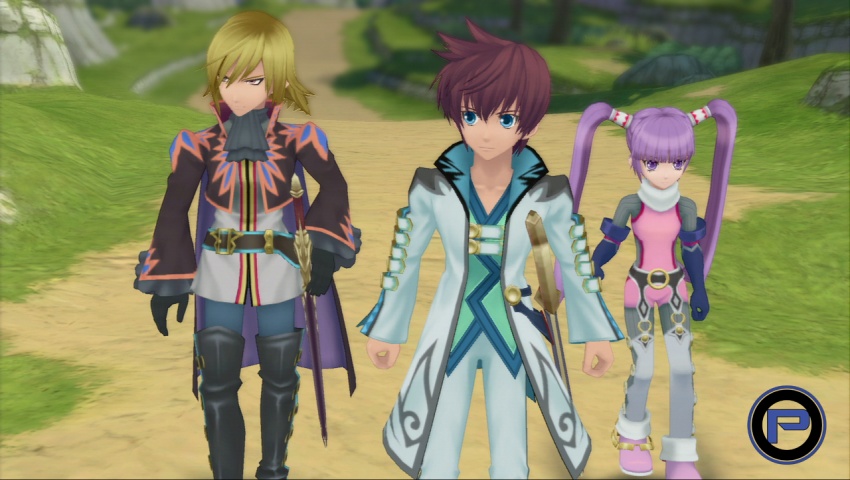 While Final Fantasy has tried to reinvent itself and fail miserably at it, ToG plays like every other Tales game since the 90’s and that fact, in this day, and age is the series main selling point.

Colorful charming vistas, populated by colorful charming characters await you in ToG, a game whose world is a bit more colorful and light hearted than Vesperia’s…perhaps my memory fails me but Vesperia is the prettier title.

A TALE OF FRIENDSHIP

Graces doesn’t break new ground in terms of story telling, the story is cliched as cliched can get even by Anime standards. Critics have burned the game for the most part, because the Epilogue has been described as “Childish” and “boring”. I found the Epilogue where the main characters are still children as a refreshing experience, and more than refreshing experience, a necessary one. The game follows Asbel Lhant, a child with wild dreams and innocent, yet strong trust in his friends and kid brother Hubert.

You need to meet Asbel Lhant and Sophie as Children in order to understand their adult plight. The game does well not only in showing the maturity of the cast as the story progresses but also the way they relate with each other in numerous optional but must see skits. Considering the light hearted theme of the tale, it is surprising that game game dwells deeper than most games in the dark theme of death and eternal life.

It does better with these themes than most game in the genre. Obviously Graces isn’t as thought provoking as Last Odyssey’s short stories, but it still tries to convey a sense of peace with both dying and in a weird way with out living those loved ones who go away forever. The game doesn’t go all soft in that regard either, characters express their feelings toward death with clarity with one another for example there is this line in the game when one of the characters pretty much tells the rest of the cast that if that if he or she dies, he or she will stay with them forever even if he or she won’t be able to see them again anymore.

Graces goes to places you don’t expect for this sort of game, the plot itself is nonsensical at times, but that is expected in standard Anime story telling. Vesperia was a beast of a different sort, but Graces sticks to Tales tradition of mediocre storytelling saved by excellent character development. The game is funny, too funny at times and it reminded for some reason of all of the fun I had when I used to watch Orphen the Anime series. The 80 hour story (if you continue playing after the first “ending”) is as satisfying as watching an entire anime saga to it’s conclusion, and perhaps in that statement lies the long standing appeal of this series towards its fan base.

NOT THE GREATEST PLAYING TALES

The world in graces feels considerably smaller to the one found in Vesperia and even to the worlds found in Abyss and Symphonia. This is perhaps a symptom of lacking a true world map, and following the Grandia-FFX blueprint with linear areas connecting towns and dungeons. It hurts the epic feeling of the game a bit, but in this case it didn’t detract much from the experience.

The one thing that needs to happen ASAP to the series is the ability to rotate the camera at will during the dungeon sections. The later dungeons are layered in a confusing labyrinth manner to cause the player to waste time back tracking between portals, this is cumbersome especially during “Legacy and Lineage”. I understand that the ability to rotate the camera would simplify these dungeons quite a bit, thus ridding them of their “difficulty” but the development team can’t be as cheap as this, the dungeons “Complexity” comes from not being able to clearly see the environments rather than because of the creativity of the development team.

Graces is a tough game even on normal difficulty, expect lots and lots of grinding to gain SP for your “Title” skills which are the fastest and best way to upgrade your characters rather than simply leveling up. I found this to be a bit annoying but not annoying enough for me to punish the game for it. After all I did finish Dragon Warrior VII which still remains the king of annoying RPG grind time in games, but compared to Vesperia the difficulty of battles is quite ramped up here. The game quite easily reaches the 50 hour mark by its own weight in storytelling and traveling, the battling though will rise play time considerably.

Okay the acting isn’t as good as the one in The Last of Us, but considering the ridiculous amount of speech from the cast, especially since all the skits are now dubbed, the consistency of the cast is impressive.

Motoi Sakuraba still is at the helm of the music department and that is a good a thing, the game sounds as good as all of the other Tales’ games.

A MUST FOR THE JRPG FAN

It is hard to recommend Tales of Graces F, for someone who doesn’t play RPGs. Like Vesperia and every other Tales game before it, Graces sticks to its late 90’s roots which is the reason why players who discovered the genre in those days will love the game, but it is also the reason why the series will never reach the mainstream. Unlike Vesperia the game’s difficult battles and grinding requirements will keep the casual player away, but what a great game it is for us old school fans of the genre. After finishing Graces I felt like I had finished watching a good Anime saga and thats something that no other JRPG series on consoles right now can deliver…that its the highest compliment I can give the game.

Gameplay: 7.5-Tales of Graces F sticks to the 90’s formula without faltering including some rough stretches of grinding in order to level up for tough boss battles. There is exploration to be found in the dungeons mainly as the overworld is regrettably composed of linear path ways connecting towns and dungeons. Dungeons lack a controllable camera, resulting in some confusingly frustrating moments.

Graphics: 7.0- Graces features PS2 graphics on full 720p running on a PS3 console. This hurts the score, but the artwork is fantastic and makes the game pretty enough for me to keep it above average level. I expected more of my PS3 experience with the series, but we must remember that Graces is an enhanced port of a Wii game,

Music: 8.5- The music is solid as always, the acting is spectacular and will keep most players glued to the screen during the skits.

Addictiveness: 8.0- In order to truly finish the game you will have to spend close to 80 hours of play time with it. There is a new game plus mode and a museum that might keep some completists playing for some extra hours after the main playthrough. There is combat arena that is extra tough, but yields interesting and useful items.

Overall: 8.0- In the late 90’s a game such as this would have warranted a 7, but due to the draught of good JRPGS in the last decade or so, Graces earns a high score, perhaps fueled by nostalgia more than anything else, either way it is the best JRPG console series that still standing today in 2016.