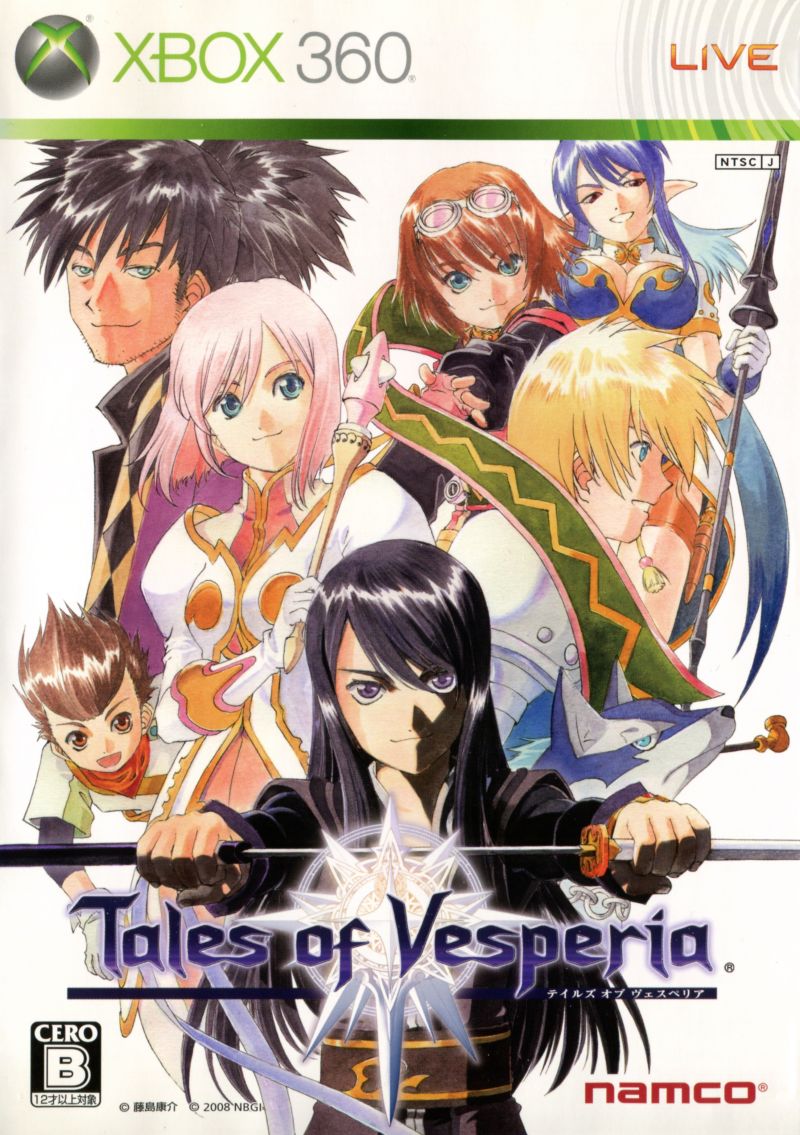 I have played the Tales Series for about three entries, Symphonia, Legendia and now the 10th installment (in Japan) 2008’s Vesperia. I must say that it is perhaps one of the few long running RPG series that has maintained high standards of quality in terms of staying true to traditional RPG conventions, while at the same time pushing forward its amazing action oriented battle system and robust character development through their interactions.

Vesperia is superior to the previous Tale games I have played ( that’s really a statement to take into consideration because the other two games are excellent), and I dare say that it is a much better RPG game than FFXIII (not surprisingly) and even Lost Odyssey. Clocking at 44 hours, I must state this is by far the most enjoyable quest I have played in this generation of consoles. About the only bad thing about Vesperia is that it ENDS!!

SOME WHAT BEHIND THE TIMES

This is pretty much academic here the Tale Series has never been known for pushing the genre forward in terms of visual quality, what you get here are decent anime styled visuals, that while not awe inspiring, get done job done very well. If only the camera were fully controllable the score might have been a tad higher in this department. 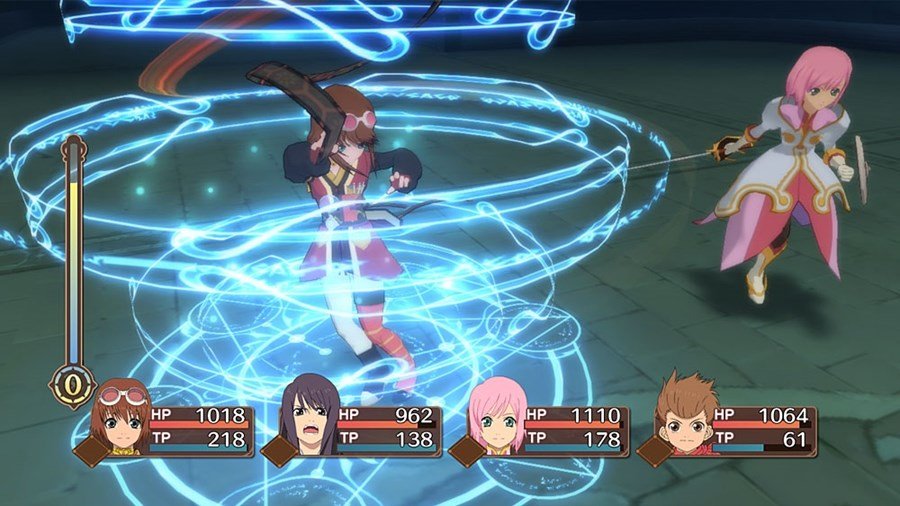 Vesperia however is no different from other 3-D games in the series, one gets the sense that the game looks maybe a generation behind some of the current RPGs in the market, that being said I never had a problem with it because the character design is flawless and the environments are beautifully designed. Vesperia keeps the old school tradition of featuring a fully traversable world map intact and it looks much better here than in previous iterations. The water effects are pleasing, and the animation during battles is silky smooth with the exception of some instances where I noticed some slowdown.

The Anime Scenes are as always beautiful to look at, and the looks real solid in HD. Kudos to the developing team.

VERY GOOD ON THE EARS

Motoi Sakuraba is a very experienced composer, especially on this series and again shows his brilliance with a great soundtrack. But the showstopper here is truly the voice acting, for the first time ever I can say that I liked every single one of the character voices in a game, even Karol’s who is a little boy and I usually find kid voices in RPGs really annoying.

A PERFORMANCE WORTHY OF REMEMBRANCE

The Story in Vesperia isn’t the most original, as with previous titles it is very clichéd, once again it places the Female lead in a dire straight and once again pits the main character as the leader of a band that comes together through different circumstances to accomplish a common goal…defeat the big bad evil empire and save the world from destruction. Of course as always there are many things brewing under the main plot.

Vesperia’s on the outset simple tale of Yuri, a drop out former Knight from the lower quarter (poor section of the imperial city) escorting Princess Estellise, a naïve, innocent and kind nature noble, into the dangerous outside world, turns into one of the most satisfying world saving quests I have ever played.

What Namco has mastered with this series is the ability to create wonderful characters through unmatched character development (Square now a days could learn a thing or two from the Tales games), Yuri Lowell is a officially my favorite lead character ever, and Estelle (the love interest) is also a favorite of mine, which is saying something considering in the two previous entries I played I didn’t care much for Colette and Sherley’s fate. I did care about how things ended up with Estelle and Yuri and I felt the same way for pretty much every character in my party.

Namco develops characters relationship to one another through well written acted out skits, and through in game scenes that are beautifully done. Quite simply the characters always have something important to say and when they say it they all say it differently. Each character has a distinct personality and it is carried out to perfection through the writing. The Villains themselves (and there are many) provide for tense moments, and every time one of them goes down, there is a nice feeling of satisfaction at witnessing their demise by the hands of our heroes.

Quite simply Namco Tales’ studio knows how to tell a story in an RPG better than anyone else in the market, and Vesperia is the best example of it. Here lies a tale of politics, love, friendship and war. The game while not as hilarious as Legendia, does feature plenty laughing at loud moments for the player to enjoy.

I was truly sad to see the credits roll, as I wanted to keep playing with Yuri and company forever. The chemistry between the party is something to behold, but alas all good things must come to an end and the game ended, in a pretty satisfying finale.

Vesperia’s pacing is excellent; there is never a moment in the game where you will have to spend long stretches of time grinding on the fields to level up in order to defeat a frustratingly hard boss. Not that I would have minded because Vesperia features some of the most fun battles you will ever find in a j-RPG thanks to the fact that it is not turn based, you can actually move freely in a 3-D space and attack any opponent at will with regular attacks and more powerful Arte attacks which are preset in to the controller by the player on the Arte menu.

Skills are learned through the usage of weapons and can later be equipped in the game menu at the cost of skill points, each character has a predetermined role, that usually goes according to who they are in the story itself. In general Vesperia doesn’t not evolve any from its predecessors and that’s fine because the system in place is excellent, as the saying goes; if it ain’t broke don’t fix it!

While not in battle Vesperia harkens back to the good old days of exploration with a fully realized world map (in the vein of the old 32-bit FF games for those not familiar with the Tales series), the world is composed of numerous towns, dungeons and other places to discover and explore, either by foot, boat or a flying ship! There are many sidequests, to part take for those looking to stray a bit from the main tale, and NEW GAME + mode with many bonuses for a second play through depending on how high your GRADE is! (Grade points are earned or lost depending on how well you do in battles).

A MUST OWN FOR J-RPG FANS!

For those disappointed at how bad FFXIII turned out to be, Vesperia is the perfect cure, a TRUE J-RPG in every sense of the word, with a wonderful cast of characters, and a satisfying quest. The only downside is that the game ends, and that Namco hasn’t announced a US release date of any other Tales console title, but we can keep our fingers crossed and hope that Namco will remember the western fan base for the next installment of this great series…

Gameplay: 9.0- Fun battles couple with excellent pacing and exploration galore! Vesperia is like an Oasis in the middle of the J-RPG desert that has been this generation of consoles!

Graphics: 8.0- Not the worst looking next gen game out there, but not quite next gen either the artwork saves this category, if you don’t like anime subtract a point from this score.

Music: 8.5-Not ground breaking or moving but Sakuraba is reliable as always and Vesperia doesn’t disappoint in this department, the voice acting is some of the best around.

Story: 9.5-Perhaps playing Vesperia right after finishing FFXIII clouded my mind a bit, so bad was FFXIII in this category that I probably got a new perspective on how to judge RPG stories. But the character development in this title is so fantastic and so engrossing that there is no way this game ranks any lower than a 9 in this department. I have played story beasts such as Xenogears and FFVII, but I was just as engrossed following Yuri’s and Estelle’s Quest as I was while I played those other two fantastic titles, and no the overall plot in Vesperia is not nearly as strong as VII’s and much less ‘Gears but in terms of character development the converse is also true!!

Overall: 9.0-The highest Scoring Tales game ever in my book and so far the best console RPG I have played this generation….now if you’ll excuse me I have to go and start another playthrough….

Metacritic rated Tales of Vesperia a 79.