The Legend of Zelda: Ocarina of Time 3D (3DS) Review 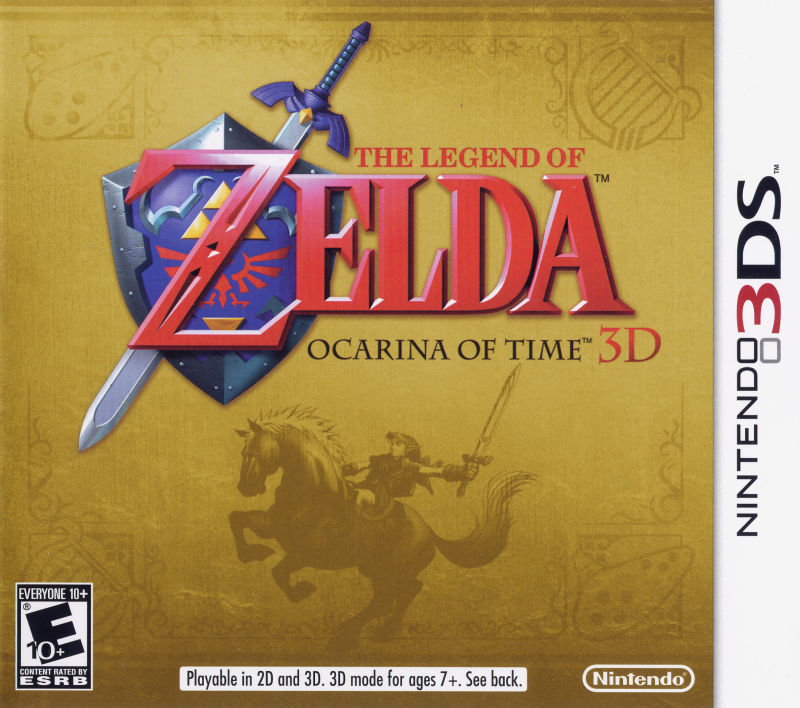 The 3DS is one powerful handheld, not quite Vita powerful and yet its power lies somewhere between the Wii and Xbox 360/PS3’s capabilities. Star Fox 64 3D, has bump mapping in some levels, and the remake of the great and legendary, The Legend of Zelda: Ocarina of Time, is further proof of this.

There were two ways to go with this remake, one was for Nintendo to overhaul the entire game world with top notch graphics that would have made game look, and perhaps, feel different to the original source material. Or, the second way more conservative way, which meant the cautious improvement of graphics to bring the title up to date with Wii’s Zelda iterations (Though Ocarina of Time 3DS has sharper and smoother animation).

Nintendo went with the safer choice, after all, Ocarina of Time is still regarded as the greatest game of all time in most circles. Why mess with something that was perfect to begin with?

To start off, Ocarina of Time 3D looks worlds better than the original.  No rough edges, and smooth characters that look exactly like the Original’s artwork intended the characters to look. The animation is flawless. I will say that the game looks and runs faster than either of the two Wii Zeldas, which is impressive because the entire horsepower of the 3DS was not put into effect here.

The Textures have all been reworked, there are strands of grass and flowers here and there in green areas. The previously pre rendered sections of the game (castle town and some indoor spaces) are now fully realized in 3-D. Quite simply, it must be said that it is hard to go back and play the original after playing through the superior 3DS version.

The 3-D effect is the big selling point in most 3DS games, and yet, here while it looks spectacular at times; it doesn’t really add anything to the gameplay per say. Yet, unlike Tales of the Abyss, Ocarina of Time 3D does look good with 3-D effect on, and that is perhaps a direct effect of Nintendo reworking the game engine from the ground up unlike Namco’s straight PS2 port.

That being said, having played Star Fox 3D and Resident Evil Revelations before it, Ocarina of Time 3D could have looked much, MUCH better. Hopefully if Majora’s Mask is ever ported we will see a drastic improvement in visual quality.

The game plays just like the original (See the original review for a detailed explanation) save for a minor tweaks that prove to be huge additions especially in the dreaded Water Temple. Item and equipment selection is now handled through the touch screen which means you no longer have to pause the game to enter lengthy menus, in order to equip and un-equip items like the iron boots or the hook shot.

Aiming with the gyro scope is useless when you have the 3-D effect on because it blurred the image as I tried to angle the (3DS) device to shoot an arrow or a deku seed. Other than those two added features to the game, Ocarina of Time 3D plays the same as it always did.

Still, it never reaches the level of precision that the N64 controller afforded us control wise. The controls are a problem not just here but in the Ocarina of Time’s  GC port as well, just like Mario 64, Miyamoto designed these games to be played with the N64 controller.

The Dungeon design, more than a decade later still thumps most new action RPG’s not named Zelda. Seasoned Zelda players (who have beat Twilight princess to death) will find the game on the easy side of things. However, once the Master Quest opens up after beating the original game, things should get a little more interesting for most.

On bonus note, the developers let most of the original’s glitches in just for fun. Though I could never pull the castle glitch, not sure if I am just not good enough with the 3DS stick or the glitch was just plain removed.

Finally, I can listen to the game in my earphones, and it all sounds good, including the environmental effects.

Ocarina of Time’s story hasn’t aged particularly well (though its lore has). Unless it’s played by the 12-13 year old that has never played a Zelda game before or even a J-RPG during the last decade, most players will no longer be as charmed as they were back in 1998 by the simplistic save the princess story while saving the world.

Since 1998, Zelda made some story telling strides with the dark Twilight Princess, and even the new Skyward Sword, but it has never unfortunately been a beacon of literary innovation. Hopefully, that will change in future iterations.

Ocarina of Time 3D is a wonderful opportunity for new gamers to play what is arguably critically the greatest game of all time. Seasoned vets will find that it is an indispensable addition to their collection and a great way to relive the good ol’ golden days, definitely a must buy.

Gameplay: 10.0- Ocarina still got it where it counts. The game still plays beautifully even on a mini-sized console.

Graphics: 9.0- The game looks worlds ahead of the original, but worlds below Resident Evil Revelations and Star Fox 64 3D.

Sound: 9.0- The midi melodies sound their age but clearer, the environmental sounds are still top notch especially for a handheld game.

Replay Value: 10.0- The main quest is solidly long, especially in the era of the quick mobile game. Master Quest, the Skulltulas, and the Hearts collect a ton side quests can take this game to the 100 hour mark.

Overall: 9.0- The greatest game of all time gets a very good remake for Nintendo’s latest successful handheld console.

Metacritic rated The Legend of Zelda: Ocarina of Time 3D a 94.