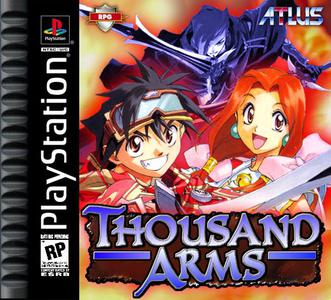 Thousand Arms is a little PS1 RPG that was released in the US, back in 1999. The game developed by RED and published by Atlus, was distributed in a small amount of copies so by now in 2005, your best bet to get the game would be by going through Ebay.

Thousand Arms is more or less a cult classic, not embraced as a classic by the masses nor by most of the media. But there was enough mystique and enough of a good reputation on it’s name, for this reviewer to buy it and play it, though I had to go through some work to get my hand on a copy of the game, I think in the end it was worth it.

Even in its hey day Thousand Arms was not a majestic looking game, it follows the same visual style of Grandia, Xenogears and Breath of Fire III to IV. It features a 3-D world with sprites for characters. Unfortunately while some places look a bit inspiring, the 3-D backgrounds are a full level below from those seen in the aforementioned trio of games.

The character sprites are also very simplistic, during the normal game, as they are squatty and lack detail.

The Over world Map is huge however and looks decent ( on par with Star Ocean 2’s over world map).

As mundane as Thousand Arms is on the visual department, the developers were crafty enough to add some flair to the game. For example the FMVs are great, and when there is an important scene (a key plot point or a date) the game substitutes the squatty character sprites with stylized “big” Anime drawings of them, giving the impression that the scenes are not “in game” but are actually FMVs , if it wasn’t for the 3-D backgrounds (which unlike the character sprites don’t change) it would have been even more deceiving.

During battles the sprites are stylized, (like in street fighter) and the back grounds are 3-D making the battles an eye pleasing experience, even today.

Aurally the Music is above average but I won’t be shouting masterpiece any time soon, but the intro theme and the ending theme are good enough to warrant the purchase of a soundtrack. Both themes feature the original Japanese vocalists.

This game heavily relies on voice acting; there is more than 12 hours of it in fact. I am pleased to say that the acting is ok…some characters like the Dark Master and the Emperor do a great job but Meis who is the main character doesn’t sound quite right is almost like the actor was a bit bored while playing it. I must say however that the acting here is better than in most PS1 RPGs.

The Story in Thousand Arms is a simple and cliched one. Yes the game is a Cult classic, and yet unlike other cult classics such as Xenogears, Thousand Arms does not feature a mind blowing plot. The story is as follows… you control Meis a spirit black smith in training and the biggest flirter in RPG History. It just happens that he is the son of a wealthy town governor of sorts, who ends up homeless after his hometown is attacked by the Black Acolytes (The evil Empire). From there he will by joined by the usual party of warriors composed by males and females as he makes his way through the five sacred altars (scattered in dungeons throughout the world) collecting spirit flames in order to defeat the last boss.

There are no Major plot twists, and No major shockers (except maybe one right at the end). However I would be lying if I told you that the plot didn’t keep me interested. Simply put: the characters saved the game! No, the characters are not terribly complicated in fact there is little to no background at all to their past, probably because it doesn’t matter.

What matters is that Meis’s failed attempts at flirting, Sodina slapping him for flirting, Muza’s complete mental breakdowns at the sight of a pretty girl, a crazy man who appears from time to time in the game claiming he is some sort of hero of love, and complete nonsensical wackiness from most of the game’s Villians, among other completely hilarious things make Thousand Arms one of the most well… hilarious and fun RPGs you will ever play.

The fact that you can date girls while in the towns also adds a lot to the Story package of the game, also NPC’s always have something funny to say.

So no Thousand Arms does not break any new grounds in terms of story telling and it won’t likely inspire people to write 500 page fan fictions on it, but it does a lot with what it has. As it makes up for the dullness of the plot, by placing the main characters in bizarre and funny situations.

Gameplay wise this your standard RPG, go to a town, then to a dungeon fight a boss, and then repeat. However there are two innovations or more like features that make the game unique from pretty much any other RPG ever made. The first one and perhaps the most important (at least in appearance) is the Dating component of the game.

Here is how it works, every girl you date has an intimacy rating (you usually date girls from the party, but there are also some town girls.) The higher the intimacy rating of the girl, the better Meis will be able to forge swords. The dates usually consist of a date, in which the girl asks questions and you have to select from two answers one that will please her an another that won’t. Answer wrong many times and the girl will leave, answer right and her intimacy rating will go up and you will get a kiss at the end of the date.

You can also give a girl a present, if it is a present that she wants (you usually find out by asking her during one of the dates) her intimacy rating will go up. Lastly you can play a mini game which usually consists of timed button pressing, again if successful her rating will go up if not it won’t.

After dating a girl you can go to the smithy (there is one in every town) and forge blades with her, this is the way to gain new spells and to up your Attack and defensive stats.

However dating is mostly an unnecessary commodity, your stats will go up regardless of the girl’s intimacy rating, as long as you level up during battles before you forge. True some of the spells can only be gained if a girl ‘s rating is high. But as you will find when playing, the spells are pretty much non useful as some of the items you can buy in the game actually heal more than the spells do and so forth. Plus the attack spells that you gain from the girls are very, very weak. So as long as you forge every time you level up you will be fine.

In the end Meis’s Summons are powerful enough to beat every boss, so the dating while entertaining could have been much more rewarding for those of us who took the time to actually date at least one girl in every town. Also the dating game has no particular effect in the plot so if you date Wyna more that Sodina for example it won’t matter in the end.

The second “innovation” is the battle system, out of a possible fighting party of 3 only one character, the front row character can fight, while the other two are relegated to casting support spells and items, this makes battles drag out a little bit longer than they should, but it wasn’t bother some, since I never ran away from any of the many random battles by the time I got to the last boss my characters were on the upper 50’s in what levels where concerned and thus I blitzed the last boss with relative ease, just by using Meis’s summons, in fact I am proud to say that I never saw the game over screen during the 24 hours that the game took me to finish. By the way if your front row character dies, the next member in line takes his place.

While the game is two CDs long and you do get to travel the entire world, this is one of the shortest if not the shortest RPG I have played since the Granstream Saga. So I found it easy and short, even though I must say that the inability to rotate the camera in dungeons, and the fact that some dungeons were almost labyrinth like in their design was a bit frustrating. There is not much on the way of side quests as the game is what it was designed to be, a short fun globe trotting quest that was full of laughter but forgettable, the kind of RPG that you only play once and its done!

A worthy purchase if you are an anime fan or an RPG fan in general. The kind of game that would also be enjoyable for new comers to the genre, that is if you can find a copy, it is considered by EB and Game Stop as a rare game.

Gameplay: 7.0 – Simplistic battle system, the dating system is not as rewarding as it should be and the game is kind of short, however it was best this way as it ended before I began to get tired of the predictable plot. Gets some points because it is one the easy side.

Graphics: 5.5 –The graphics were average in its day and today in 2005 Thousand Arms visually has not aged too gracefully, in fact the only saving grace here are the stylized sprites during battles and in game scenes and the awesome FMVs.

Music: 7.5 –Forgettable sound track but the ending and intro themes in Japanese pop are great, also the acting took the score to above average land.

Story: 7.5 – RPG tales don’t get more simple and cliched than this…But the flirting, and the hilarious dialog saved the story, amazing what some humor can do to save a game’s plot from mediocrity, Ya hear that SONY!!! Keep that in mind if you are going to make a Legend of Dragoon sequel!

Addictiveness: 7.0 – Play it once, laugh, finish it and then keep it on the shelf.

Overall:7.0 -A solid RPG experience, I can see why it is a cult classic of sorts (the Anime style, the Humor and Dating) Not a real must buy, but a nice buy if you can find it.