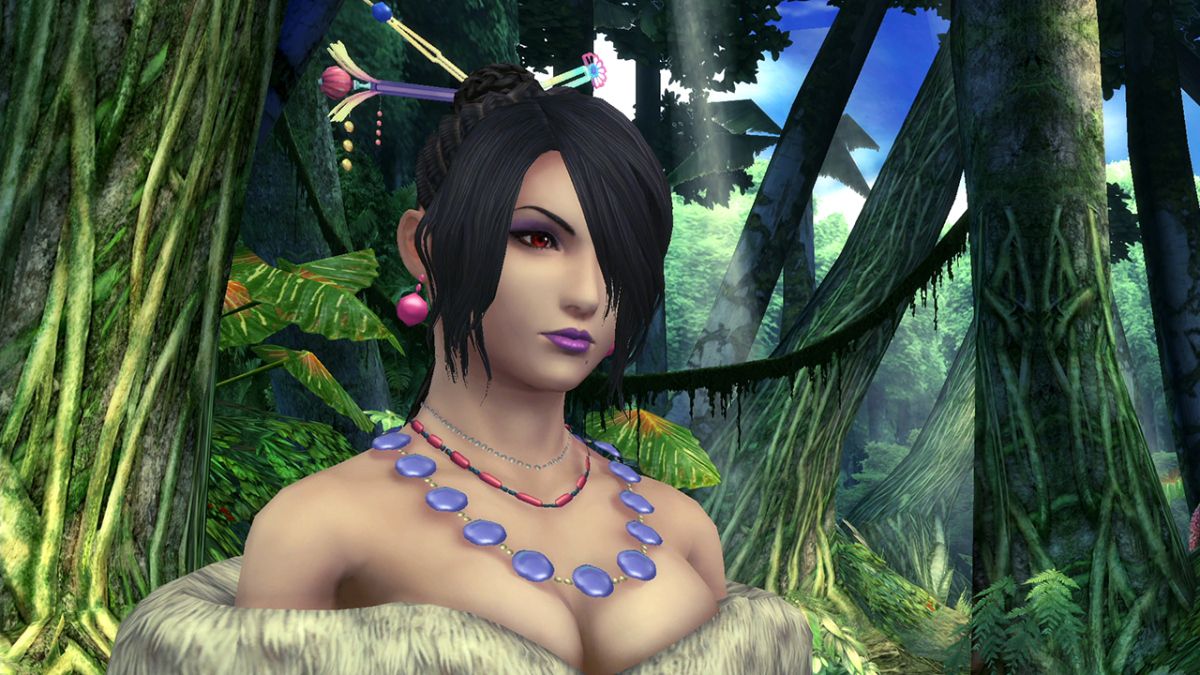 There are a number of reasons I keep replaying Final Fantasy X. For starters, it is my favorite Final Fantasy game, favorite battle system and the story is flawless. Each and every character is unique and memorable, but for me it’s Lulu that really shines.

Lulu is, in my opinion, the most important of Yuna’s guardians. Each play their role of course, but Lulu is constantly lifting Yuna’s spirits, despite her stoic nature. She originally didn’t want Yuna to even become a summoner, because she cares for her like a sister. Ultimately though, she decides to be her guardian and let Yuna follow in the footsteps of her father.

Yuna looks to Lulu for support and approval and Lulu never loses patience with her. She is headstrong and motivated to see Yuna to her end goal, no matter the cost. This stood out to me because, much like Tidus, many of Yuna’s guardians do not want to see her fulfill the Final Summoning. Although Lulu no doubt feels the same about losing Yuna, she continues to support Yuna in every way possible.

I’ll never forget that scene in Kilika when Yuna performs The Sending. Afterwards, Yuna tells Lulu, “I hope I did okay.” Lulu brings Yuna in for a hug and says, “You did very well. They’ve reached the Farplane by now, but no tears next time, hm?”

In that moment, Lulu was reassuring Yuna while also encouraging her to be stronger. It was in this moment that really solidified my love for Lulu. She is strong, determined, and always has Yuna’s wellbeing in mind.

Another thing that sets Lulu apart from the other guardians is her guidance of Tidus. She is by far the most helpful when it comes to acclimating Tidus to this new Spira that he is not used to. Even though she doubts him being from Zanarkand, and with good reason, she continues to answer every question he has along the way.

She won’t hold back if she thinks he is an idiot though and her sarcastic, cold personality always put a smile on my face. Nevertheless, she is instrumental in informing Tidus about what is happening.

In that same scene I mentioned above, she walks Tidus through what a Sending is and what the responsibilities of a summoner are. Knowing full well what lies ahead for Yuna, she continues to support Yuna and speaks to Tidus in way that really shows how much she cares for Yuna. While she is apprehensive of Tidus at first, she eventually warms up to him.

The last relationship that comes to mind is Lulu and Wakka. Having dated his brother Chappu before his death, and growing up with Wakka and Yuna, she is rather close to Wakka. Much like with Tidus and Yuna, she offers Wakka guidance and advice when he needs it.

She certainly speaks her mind though and does not hold back, especially with Wakka. Behind her cold harshness lies a kind-hearted, intelligent person though. That is one of my favorite things about Lulu. She almost never smiles or breaks from her stoic nature but she is certainly one of the most caring characters in the game.

As the story progresses, it is sweet to watch her relationship with Wakka grow. What started as childhood friendship becomes much more and it is incredibly heart warming to see what transpires between the two of them in X-2.

Lulu has been through quite a lot throughout her life. She still grieves Chappu’s death throughout the game. Another big regret in her life was not being able to save the first summoner she was a guardian to, Lady Ginnem.

Lady Ginnem lost her life in the attempt to acquire the aeon, Yojimbo. There a few moments in the story where this is mentioned, but Lulu, having been Lady Ginnem’s only guardian, never forgave herself from being unable to protect Lady Ginnem.

You get to see Lulu deal with all of this as the party approaches the Cavern that houses Yojimbo. Having finally realized that her previous summoner had never been sent, Lulu must face her fears and finally lay the spirit of Lady Ginnem to rest.

Though she was new to being a guardian for Lady Ginnem, her and Wakka both became guardians to Father Zuke shortly after. His pilgrimage ended in the Calm Lands when he decided not to continue. This was a fairly common place for summoners to decide to end their journey.

Her two previous experiences with being a guardian no doubt set her up for success with Yuna. Although, she had hoped Lady Ginnem or Father Zuke would succeed so that Yuna would not have to deal with Sin. At any rate, her knowledge is invaluable until the party begins to stray from the teachings of Yevon. Once in uncharted territory, she is still a valuable friend and party member.

If character development isn’t enough to make you appreciate Lulu, her power should be. Her grid sphere gives her access to so many powerful spells and makes her an absolute powerhouse towards the end of the game.

She was almost always in my party on the battlefield and I certainly spend the most time with her on every one of my playthroughs. For me, the game wouldn’t be the same without her, though the same could be said about every character in Final Fantasy X. I think they did such an amazing job fleshing out every character and bringing them to life.

Lulu always stands out the most to me, though. She is a wonderful example of what a friend and guardian should be, and continues to let Yuna lead her life the way she sees fit. Without Lulu, there’s no doubt in my mind that Yuna, Wakka, and Tidus would all be lost. I believe she holds the party together.