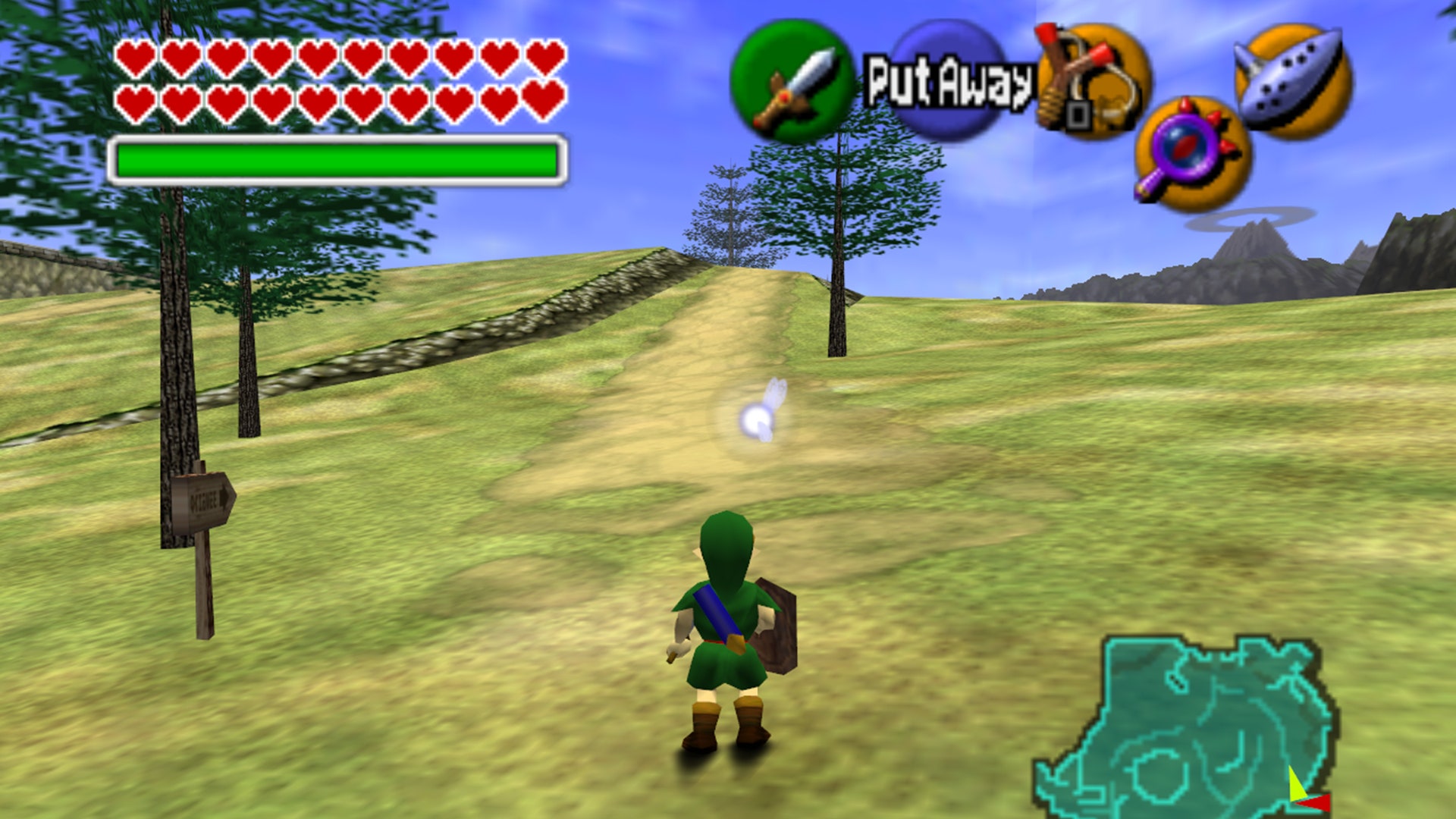 The 23rd of November (three days ago), marked The Legend of Zelda: Ocarina of Time‘s 22nd birthday. Yes, it has been a whooping 22 years since we first got our hands on what in my opinion remains – to this day – Nintendo’s finest gaming moment. It is only natural that today’s throwback section takes a serious look back at one of the greatest, and most influential games of all time.

In terms of critical reception, Ocarina of Time is the greatest game ever at the time of its release

The Legend of Zelda: Ocarina of Time’s greatness is not up for debate.  The game, for over two decades has held the top spot in terms of critical praise over any video game that has ever existed according to Metacritic.

Its 99 “Meta” rating score remains uncontested, and it will be very difficult to surpass. No matter how great a game is, there will always be a critic somewhere in the world that will find something to dislike about it. Case in point: The Last of Us: Part II.

The Last of Us: Part II‘s 93 Metacritic rating certifies it as a great game (and it is this year’s front runner for the Game of the Year award, as it leads in nominations), and yet, a ’93’ meta score means that a few critics didn’t quite appreciate the game as a great one. It is hard for a game, even when it is a masterpiece, to gather universal acceptance as such.

This has happened to pretty much every game in existence. We rave about how great Chrono Trigger is (it truly is), and yet Electronic Gaming Monthly rated the game back when it was released as a 9.0, 9.0 ,9.5., 9.5 game. Four reviewers, and not a single one thought that the game deserved a 10. The game, currently holds a 92 Meta score, as IGN, and other big publications submitted sub 90 scores for it.

So, within that context; Ocarina of Time in the late 90’s had to be every bit as special as its 99 Metacritic score indicates. It is the one game that had nearly every critic universally agreeing on its excellence.

What the critics said

Electronic Gaming Monthly, easily, was the American game magazine that I respected the most. The reasons for that were simple: The magazine had a long trajectory, its reviewers’ criteria for grading a game with a ’10/10′  score was extremely high (as evidenced by Chrono Trigger’s scores). And perhaps, more importantly, at its peak the game magazine had four different reviewers for most games (four different opinions).

The Legend of Zelda: Ocarina of Time, in 1998, became just the second game to have earned four 10s in the publication’s history. Ironically, only a month after Metal Gear Solid got his own ‘Platinum Award’ by becoming the first game to achieve the feat.

“Once again Shigeru Miyamoto, and the wizards at Nintendo have delivered a truly epic gaming experience that no one should be allowed to miss.” EGM Reviewer, John Ricciardi, wrote when describing the game before continuing, “The game’s creators have managed to take everything that was great about the 2D Zelda games – The exploration, the puzzles, the dungeons, the loads of hidden secrets, etc. – and : translated all into 3D flawlessly.”

Next Generation Magazine, another popular magazine of the era, also awarded The Legend of Zelda: Ocarina of Time a perfect score writing:

My thoughts on The Legend of Zelda: Ocarina of Time

Twenty two years later, as a grown man, I don’t need the game critic world to reinforce my belief that The Legend of Zelda: Ocarina of Time is greatest game of all time by almost every metric utilized to judge a game in a historical context.

Yes, critical scores are in agreement with my own. But, my 13-year old self, didn’t need a long line of critics to tell me that what I was experiencing as I woke up in Kokiri Forest for the very first time was something otherworldly, and special. It just was.

I had played, and loved Final Fantasy VII before it. And, I had experienced Super Mario 64 in all of its full ground breaking glory nearly two years before I inserted my golden Ocarina of Time cartridge into my trusty Nintendo 64. None of that mattered. Ocarina in many ways felt even more ground breaking, and magical than Super Mario 64, and created a more cohesive and interactive world than Final Fantasy VII ever could.

Walking into Hyrule Field for the very first time was a life changing experience. Unlike FFVII, and every other RPG that I had ever owned to that point, Ocarina of Time, presented a full 3-D world built to a 1:1 scale with my controllable character.

A realistic day and night cycle, weather changes, and the all important “If you can see it on the screen, you can go there” feeling that we take for granted in today’s games, but that Ocarina of Time pioneered rounded out the experience.

Perhaps, apart from Super Mario 64, it is Miyamoto’s first 3-D Zelda which most influenced every other 3-D game that came after it. Its design was perfect, every other 3-D Zelda that followed built itself upon the foundations set in stone by Ocarina of Time.

“Anyone who makes 3-D games who says they’ve not borrowed something from Mario or Zelda [on the Nintendo 64] is lying.”-Dan Houser (2012)

The Legend of Zelda: Ocarina of Time, remains a master class in game design, a reminder of how brilliant Nintendo EAD, and Miyamoto were during the early 3-D days.

When every one else was struggling to come to grips with the implications of movement in three dimensions, and how to design something playable on it, Miyamoto and team were creating a virtual world that would redefine and define what 3-D adventure games, and action RPGs should strive to achieve.

The argument for Ocarina of Time’s all time rank based on how it performed at release, is perhaps the most important one: The Legend of Zelda: Ocarina of Time is the most impressive, and  most astonishingly perfect game at the time of its release that I have ever seen. Mario 64 has an argument here too, but no game came quite came close to Ocarina of Time pulling off a cohesive open world in 1998.

At the time, Ocarina was graphically almost perfect, you needed a PC with an accelerator card to get something that looked better. It pioneered, and refined many interesting game mechanics that have stood the test of time such as enemy targeting and strafing, horse riding, first person archery (within a 3rd person action adventure), an incredibly deep fishing game (as an elaborate mini game within a game), context sensitive buttons, a full 3-D open world that could be fully explored where the day and night cycle influenced the behavior (although scripted) of NPCs, and enemies. I can keep going, but I would end up writing a long research paper.

While every developer in the world struggled while making small advancements in the 3-D space, Nintendo and Miyamoto with Ocarina, and Mario 64 were writing the book on how to succeed, and getting nearly everything right on their first try.

I don’t think young gamers today, or those whose first videogame experience came post Ocarina of Time appreciate just how big of a jump it was to go from something like A Link to the Past to a massive 3-D game like Ocarina of Time. It was mind boggling.

Final Fantasy VII, for example, as great as it is; plays similarly to Final Fantasy VI. The series made a transition to 3-D, but apart from nailing the basic aspects of 3-D movement (during the over world, and within its pre-rendered backgrounds) the game played the same as it always did. Final Fantasy VII did establish a set of standards in terms visual, and storytelling presentation for the JRPG genre.

In a stark contrast, Ocarina of Time changed the way we played video games in nearly every gaming genre. It taught other game designers how they should go about in the crafting of 3D worlds, and the design of gameplay concepts.

I am currently enjoying Assassin’s Creed: Valhalla, just like I enjoyed The Legend of Zelda: Breath of the Wild before it, and the Witcher 3 before that one. All of them, played, and still play by many (if not most) of the same rules that Nintendo set in stone with The Legend of Zelda: Ocarina of Time 22 years ago.

If you want to experience this masterpiece today, and don’t have the N64 version, there is a GameCube release (on a collector’s disc) that you can track down on Amazon and/or Ebay.

Perhaps, until Nintendo releases a Switch collection the best way (and perhaps cheapest if you own a 3DS) to enjoy Ocarina of Time is on the excellent 3DS Remake by Grezzo.

The Legend of Zelda Series consistently churns out incredible main entries, with Breath of the Wild being by far the most commercially successful one. However, to a 90s’ kid like me, it is The Legend of Zelda: Ocarina of Time that will forever remain engraved in my heart as the series’ finest, and most awe inspiring moment.