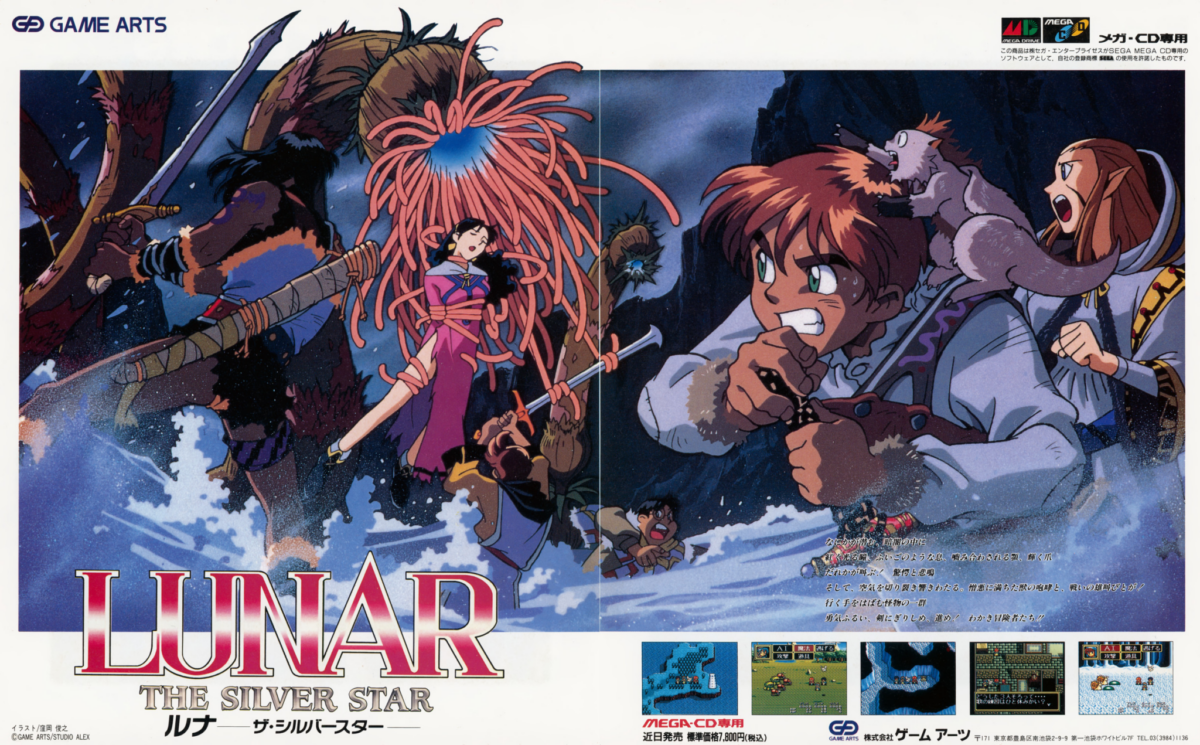 Last month, on December 12th to be exact, marked the 15th anniversary of Working Designs’ defunction. For those of you unfamiliar with the company, Working Designs was an American publisher that brought over Japanese games to the States. Most of these Japanese games were role-playing games that otherwise would have never made it to our shores.

Working Designs was much more than just a publisher though. The company initially founded by Todd Mark, was a software company focusing on logging management software for the IBM PC.  Lead programmer Todd Mark’s death in 1988 led to the hiring of Victor Ireland to complete his unfinished work before transitioning the company to a game publisher in 1990.

Victor Ireland would play an integral part in making Working Designs one of my most beloved publishers of all time. The company made incredible strides in enhancing the presentation – both physical and “in game” – of the titles that it brought over from Japan into the western market. From color, hard cover “booklets”, to collectible goodies (such as Luna’s Pendant in Lunar 2: Eternal Blue), to the best translations of J-RPGs that the market has ever seen. Working Designs was truly much more than a conventional publisher of games.

Genuine thought was put forward by the company in translating and packaging each one of its titles. For a premium price, Working Designs’ games were packaged with an assorted number of goodies. In my own experience, its Lunar packages have been some of the most, if not the most awesome, video game packages that I have ever acquired as a long time J-RPG game collector.

What Went Wrong for Working Designs

There is not one single culprit, but a collection of different unlucky breaks over a long period of time that led to the company’s demise. Working Designs and Victor Ireland had the vision to bet on the J-RPG genre when it was mostly considered niche. More famously, they brought the Lunar Sega CD games to the west.

But therein lies the problem. The Sega CD was a failed add on with a small user base. A failed attempt at convincing Bernie Stolar that J-RPGs were going to sell well on PlayStation would later force Working Designs to work another failed platform: The Sega Saturn.

Bernie Stolar would eventually go on to work on Sega (During part of the late Saturn, and Dreamcast era). But Bernie didn’t believe in J-RPGs early in the PS1’s lifecycle, and it pushed Working Designs into Sega’s ill fated platform.

Victor Ireland is a passionate guy, a straight shooter, and it seems like he, himself, believes that being shut out from Sony’s PlayStation, a machine that fueled the J-RPG golden era, was a killer for Working Designs.

An interview with Lunar-Net.com at E3 1998 hints at how Ireland felt about Stolar during that time in which he was preparing to leave Sega to try his company’s luck at Sony’s (then thriving) JRPG environment.

The interviewer asked about the prospects of Lunar 3, and Ireland replied that it (the game) was in its early stages of development back at Japan. When asked about the game being released on the upcoming Sega Dreamcast, this is what Ireland had to say:

All I can say is that in the US we have the Lunar trademark, if we don’t do it nobody can. If they try to do it they can’t call it Lunar, and we are not publishing for Dreamcast. So that’s the long round-a-bout, so it doesn’t really matter what system it’s originally published on, it will be on whatever system we are publishing on here. That is about as specific as I can get. Unless Bernie is gone Dreamcast is a serious no for us. – Victor Ireland

The interviewer would go deeper into the ‘Victor Ireland vs Bernie Stolar’ topic and brought into the forefront the fact that Stolar had just given a Dreamcast press conference preaching J-RPGs as one of the most important genres for Sega’s new system. Ireland, perhaps remembering bitterly how Stolar had turned him and his company down during the early PlayStation days, went on another lengthy reply that really showed how much of a visionary he was – in contrast to Stolar – when it came to games and RPGs:

Only because he found out that they sell. He’s not a leader, he is a follower. Sony legitimized that segment, and he has seen the money. Because when he was at Sony he was the one who said RPGs were not significant. He told us, one person removed from him, his representative said- Bernie said RPGs are not a significant portion of the market, we do not want to support them in the US. Thats why Arc the Lad didn’t come out, we were pushing for Arc the Lad. We were going to release that game, and they wouldn’t let us license it from Sony of Japan, and they wouldn’t let us release it here. Because they said they(RPGs) weren’t significant. The only reason he changed that tune is because he’s seen Final Fantasy 7 sales, and he’s seen that if you put money behind it(an RPG), and it’s a good to great RPG it’ll sell, and it always would have. He’s a follower, he’s a business man who has no idea about games. He’s a follower, he’s a business man who crunches numbers, and has no clue about what makes games great. – Victor Ireland

Working Designs, thanks to Stolar, arrived too late to the PlayStation RPG party, and even its Lunar PlayStation releases did not sell as well they could have had. Arc the Lad is an example of this.

Arc the Lad, and the End of Working Designs

Ireland went to Sony, asking for the license to bring Arc the Lad over to the US from Japan in the mid 1990s. The idea was sound. A niche, but quickly growing number of JRPG fans wanted the game to be brought overseas. Ireland saw an opportunity, but Bernie Stolar (who was running Sony Computer of America at that time) was adamantly opposed to the genre’s chances of success on the west.

Eventually, Ireland and Working Designs would end up publishing Arc the Lad as part of a 4 game collection on the West in 2002. The Arc the Lad Collection arrived a whooping seven years removed from the original release of the first title. Perhaps, most damaging of all, is the fact that the games had to be released in a bundle. Thus, Working Designs missed a commercial opportunity to sell the 3 main entries separately (or at least the first two bundled, and the third as a standalone title) missing potential millions of dollars in profit, which would have kept the company afloat during its final trying years.

Despite all of the money spent translating, and packaging the wonderful collection, Arc the Lad did not sell well. Numbers are elusive, but the bet here is that it didn’t even sell 100,000 copies, though this is a question I would love to ask Ireland himself one day.

Stolar shutting down the door on Working Designs in the mid 90s likely kept the company from riding the start of the massive JRPG wave of success that Final Fantasy VII ignited. By the time Ireland and company got to Sony, Working Designs seemed to be on borrowed time.

At the end of day, it was the Growlanser Generations Deluxe (the company’s final release) that finally drove Working Designs to its grave. In another example of the big company forcing the smaller company to do its bidding, Sony forced Working Designs to publish both Growlanser titles bundled together. Though Ireland vehemently opposed Sony’s suggestion (knowing it could spell a disaster for his company), the Japanese giant only offered a ‘take it or leave it’ approach.

Ireland had this to say to GameSpot in 2005 when asked about what drove Working Designs out of business:

Packaging Growlanser II and III together, doubling our costs and localization time and halving our profits in one fell swoop, wounded us. Goemon not getting approved was the end. At that point it was clear that the kinds of games we do and the manner that we do them would no longer be a guarantee of approval, and if I can’t use my 15+ years of experience to pick games I know will sell and get them approved, what am I doing? What are WE doing? The majority shareholders in WD voted to stop the nonsense there. I can’t say I blame them–they’d lost enough money in the 3 years prior while we tried to iron it out. – Victor Ireland

In the end, I bought Growlanser Generations and was pleasantly surprised by the packaging. The game’s box included Growlanser II, and III, a Silver watch that looked amazing (but wasn’t silver), a ring and a deck of cards. Little did I know at the time that it would be the last published Working Designs game.

Working Designs upped the ante in packaging and JRPG translations in the west. It also published some of the greatest games of all time in Alundra, and the Lunars. To conclude this Throwback Bit Thursday article, I will leave you with Ireland’s own quote on what made him proud of having been part of Working Designs:

Seeing the respect gamers get now from so many more companies than when we started. Color manuals were a novelty, foil-stamping was unheard of, spell checking and proper grammar was amazing…now all of those things as well as deluxe packaging, soundtracks, great hint books, etc. are far more common. As a consumer and a gamer, I see the change and know that we were a driving force because we showed it could be done and made more than just our customers expect it. – Victor Ireland

Publisher’s Note: Fans of the Lunar series have started a petition for Game Arts (the Japanese developer of the Lunar series) to make Lunar 3. We will be covering their efforts here at NER. To support the petition, head to lunar-3.com.