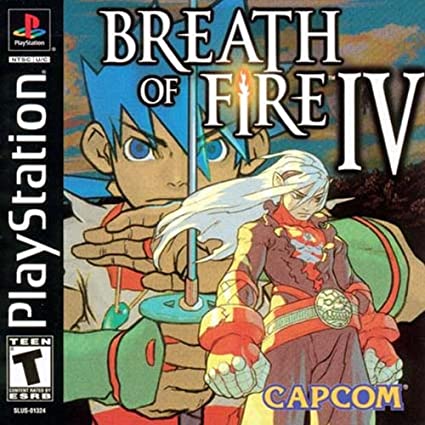 Many publications out there claim that Breath of Fire IV is, at best, an average RPG. I personally found the game to be surprisingly good. Most of the complaints from the publications centered on the fact that Breath of Fire IV was too similar to other entries in the series. Since I had never played any of its predecessors, I found the game quite original, and the story very refreshing and involving.

Not everything is well in the game world of Breath of Fire IV. A Wyndian Princess named Elina has disappeared while traveling on a good will Journey through the eastern countries. Most of these countries have been devastated by the war against the Western Empire. It seems like no one is doing anything to try to find Princess Elina, so her younger sister Princess Nina joins with child hood friend Cray on an adventure to find the lost Princess.

Fate brings the duo together with a boy who has the ability to turn into a dragon. The boy’s name is Ryu, and he is the main character. Ryu doesn’t speak throughout the game, the developers did this so that the player could give the character a personality of their own. Ryu doesn’t remember anything about his past (which is typical of JRPG protagonists), so he decides to stick with Nina and Cray.

While Ryu is the main character, you also get to play as the god emperor Fou- Lu, who strangely enough can also turn into a dragon himself. From there you embark on a journey of self-discovery. A journey that eventually turns into a world saving affair.

The game has funny moments, and many serious ones too. What the game lacks though, is a strong love story. Ryu cant speak so his interaction with Nina is straightforward and simple. In fact the saving grace of the plot, are the scenes involving Fou-Lu. Unfortunately, the downfall of the game’s plot is that these scenes are short and occur far apart from one another. Of the 34 hours that it took me to reach the real ending, I would be surprised if more than two were spent following Fou-Lu’s story. Which is a shame.

While Ryu journey is interesting in itself. Ryu is not a likable character, after all, he doesn’t speak.  And Nina? I hated her by the end of the game. The rest of the crew is average as well. Fou-Lu’s journey though was incredibly entertaining, and full of great likable characters. I loved Mami. But as I said before, his scenes were short, giving characters like Mami no time to build themselves up.

Even Fou-Lu himself feels underdeveloped. While you might say, “Well he is the villain”. In my eyes he was the deepest character in the game. Plus he is not the real villain; the real villain is a non-threatening looking dork who you never get to fight even though you really want to chop his head off.

So, I was very disappointed that the game didn’t go into more detail on Fou-Lu’s journey especially in the relationship between him and Mami. Their relationship was the greatest aspect of the story, it was also for some reason; very underdeveloped.

The game does redeems itself partially by offering two endings, the easy one (boss battle is literally impossible to lose) in which you end the story the way Fou-Lu intend it. Or the hard one and real ending in which it ends the way Ryu and Company want the story to end.

Honestly, after playing through the game and after examining Fou-Lu’s motives for doing what he was doing, I decided his ending was the more appropriate one. The problem in his ending is that it is way short, like 30 seconds short, which was truly disrespectful to his character.

The real ending of the game though, was long and well written. The big plot hole left unresolved, is that you never get to see the real villain ( that dork I was talking about earlier) pay for his crimes, because simply he doesn’t pay for his crimes.  A similar two ending system was done better in The Granstream Saga.

The story does not disappoint, but it doesn’t amaze either, and considering the potential it had with Fou-Lu’s tragically underdeveloped story, the writers pretty much held their own story down from reaching greatness. Still, the story is good enough to warrant the game’s purchase, especially now that the game can be found at ten dollars in stores.

Sound wise the music doesn’t break any new ground and it’s on par with games like Alundra 2 and The Granstream Saga. Even though some of the tunes are particularly catchy. There is no voice acting and the sound effects are standard RPG fare.

Visually the game is on par with Xenogears and maybe even Grandia, even though some locales (Cities, forests etc.) do not look terribly original. The character sprites are incredibly good; they are better animated than most characters on other games that follow a similar visual style. Which is not to say that the graphics couldn’t have looked better.  Some cities and places look bland, specially when you compare them to Grandia’s gorgeous locales (both graphically and in design). There are no FMVs (except the intro video) so what you are getting is a solid visual package that never truly manages to lift itself from being just that; solid looking.

The gameplay is a strong point of the game, I simply enjoyed fighting battles and that says a lot considering that most RPGs (even elite ones) usually irritate me with their uninspired random battling systems. First of all, I like the idea of being able to use all my party during a battle, because it adds tremendous depth in strategy and makes the game relatively easier.

There were some boss battles (including the tough, tough final boss) in which my success solely depended on how well and at what time during the fight I switched characters. You can only have three characters fighting at once but the rest of the party stays behind your front line of offensive characters, and they can be replaced as often as you want. I really like this approach in RPG battles (this is the reason I think FFX has the best battle system of the FF series).

Not only is the battle system excellent, but character customization system is also very flexible and easy to use. During the game if you explore areas thoroughly you will find characters called masters, when you become a master’s pupil you can learn whatever skills that particular master teaches. Some of the skills like high HP, high Strength, and high defense are very, very useful and necessary for success.

As your characters level up they learn their own attacks and abilities too. Ryu and Fou-Lu in particular are very fun to use because of their Dragon morphing abilities. The more you level up the more the dragons inside the two characters become more powerful, and learn new attacks, some of them devastating.

The only frustrating battle in the game is the last one, and that is because it’s too long and there is a good possibility that if you are not well prepared (In a high level) the boss will mop the floor with you in a few turns.

Aside from the battle system, the rest of the Breath of Fire 4’s gameplay is mediocre at best. There is no real-time world map instead you are left with poorly drawn map with preset patterns for you to follow. Sometimes though, a ‘?’ sign appears and if you hit ‘X’ on the controller you enter a new area in which you can fight enemies, find fishing spots, etc.

Once inside areas and towns, the game controls identically to Xenogears and Grandia. Yet, for the sake of innovation Capcom has added to each main character a unique ability to use while exploring areas. For Example Ryu can cut stuff to open new paths, Cray can push objects out of the way, and Nina can fly up high so you can get a better view of the area. It is very important to know these characters and their abilities because they are crucial for your progress. You can be stuck in a room forever if you don’t realize that you must use Cray to push the object that is blocking your way. Nina’s skill however is the most useless.

The one problem that I had with the controls was that climbing a ladder could be the worst pain in the rear end thanks to the horrible camera. Yes you can rotate it 360 degrees just like in Xenogears. But the problem is that when you press the R or L shoulders to rotate the camera, the angles are preset and for some strange reason ladders never end up face to face with the characters making some climbing scenes down right annoying.

Another gameplay complaint that I have is the fact that the mini games are lame, and that includes the fishing game. The fishing game is nothing short of a stupid waste of time. Will there ever be a fishing game in an RPG that surpasses the sheer enjoyment of the one found in Zelda: Ocarina of Time? Unlikely…

Controls, and under developed Fou-Lu story aside, Breath of Fire is a decent RPG that hardcore fans will enjoy and casual fans might find worth playing. However, it wont change the way you look at RPGs, if you are not into them. A shame, truly, that the game could have taken advantage of Fou-Lu’s story and it didn’t. Hopefully Capcom learns its lesson for future installments.

Gameplay: 7.0 — The annoying camera gets on the way of the other wise decent gameplay.

Graphics: 8.5 — The lack of a world map, uninspired locales and the camera take the score down.

Music: 7.0 — Average fare, some tunes do manage to rise to the occasion though.

Story: 7.0 — Fou Lu’s story could have save this thing, but the developers butchered his sub-plot.

Overall: 7.0 — A solid game that does not excel in any particular area.

Agree with the author? Couldn’t disagree more and are frothing at the mouth to tell him? Leave a comment here, on Facebook or send an email and make sure to follow Never Ending Realm on Facebook, Twitter, and YouTube!
Category: Reviews
Tags: Breath of Fire IV, Breath of Fire Series, PlayStation 1, RPG