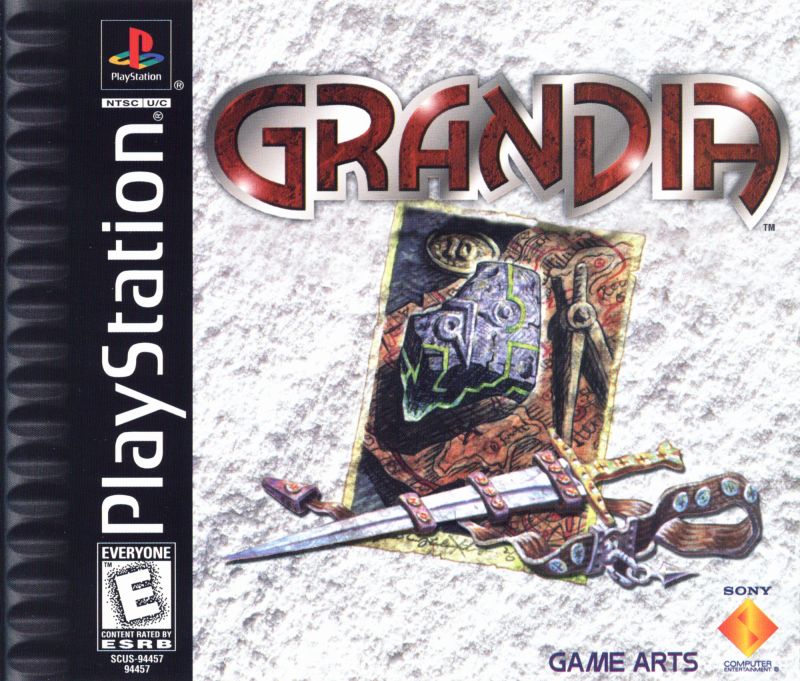 Grandia was Sega Saturn’s answer to the PS’s FFVII, it was an RPG that was promised to eclipse any RPG before it, and while it’s not as good as FFVII, it comes close and it is one of those few RPGs that can be defined as a classic.

Being that the Saturn was almost on its deathbed in the US at the time Grandia was about to be released, the game was canned for the states. This caused much suffering to true RPG fans that had been eagerly waiting for this masterpiece. However thanks to collaboration between Gamearts (the developers) and SCEA about two years later in 1999 the game was released in the States as a PS1 game.

Graphically Grandia follows the same visual style that Xenogears follows, fully 3-D backgrounds that are viewed from a top-view perspective, the characters and enemies are 2-D sprites. However I have to say that after playing both of these games, graphically they are about in the same class, Grandia’s artwork however is more colorful, with amazing water effects as far as 32-Bit graphics go. The environments are full of details that can be interacted with, for example, glass bottles in a kitchen can be knocked down, and brooms resting on walls can be knocked over.

If there is one flaw graphically is the fact that a noticeable slowdown occurs in the screen when there are many sprites moving at a time, or when the are many effects on the screen at once. This slowdown was not present on the Saturn version, a testament to that defunct system’s power.

Musically the game is on par with its sequel Grandia 2, some of the sadder compositions are great however the rest of the soundtrack is good but not great and I dare say not very good either. However the songs get the job done and are never particularly annoying. However the same cannot be said for the voice acting, Justin is just plain annoying and Feena does a good job as long as she is not in a dramatic scene. I have some bad memories of a scene in which Feena cries or so it seems since it sounds more like she is trying to laugh but she is constipated. There rest of the cast is terrible too with the possible exception of Mullen’s and Baal’s voice work.

In the sound department the game is way below the Square RPGs of that era.

The gameplay in Grandia is your standard RPG fare one, in fact like in Grandia 2 there isn’t much to discover in the over world, but at least in this game there a few hidden swords and equipment in treasure chests.

The world might have the Grandia series to thank for the lack of true over world maps in today’s RPGs. Since Grandia was perhaps the most revered game to start the tradition of ditching a real-time over world map in favor of a drawing with dots that connect to the places you want to go. Obviously this is one of the worst things that could have happened to the RPG industry it was fine when Grandia used this approach as it was the only game at the time to use this. Yet it now makes my blood boil when Game series like Suikoden and Final Fantasy went on to follow this approach. I always saw the lack of a real time world map in a game as a product of slacking in the developers; no real time world map kills the Immersion in the game world and the exploration.

The battle system in Grandia is today the industries best as it obviously was in 1999. The system feels like an action RPG but with turns. The battle system works this way: There are no random encounters, instead you are able to see the enemies on the environments. So you can either avoid the enemies or fight them. Avoiding the monsters of course is not recommended because like in every other RPG success on Grandia depends on how high your level is, and the only way to gain levels is by fighting monsters. 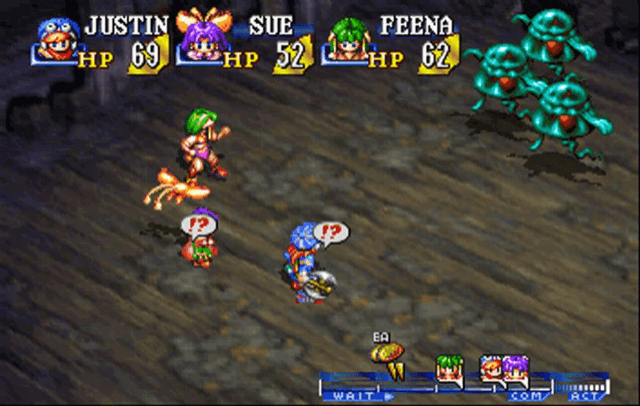 If you run into a monster and touch him from behind (without the monster noticing you) you will have a tactical advantage in the battle. In other words you will be able to attack first, if in the other hand the monster surprises you, he or them, there can be as many as six at a time, will have the first turns to attack your party.

Once in battle there is a gauge on the bottom of the screen called the IP gauge. In here you can see an icon for each one of your party members and for each one of your enemies. The icons will move toward the right side until an icon reaches the COM point in the gauge at which point the battle will freeze and a menu will open up allowing you to chose a command for the one character that has reached the COM point. After the command is selected the icon will move towards the end into the ACT point at which point the character will perform the attack.

This adds incredible strategy and depth because you can see what the enemies are doing and performing a critical or a special move on an enemy that is traversing the gauge between the COM and ACT points will result in the cancellation of that enemy’s move. This will give you either more time to breath or a chance to attack or cure depending on how far the characters in your party are in the gauge.

The enemies of course can also cancel your attacks, when you choose an attack you can actually see in a small menu how much life and enemy or boss has left. The best way to describe Grandia’s battle system is as a turn-based/action hybrid system. Depending on how well you play your strategy you can finish up some enemies before they have a chance to attack and in boss battles you can get many hits in before the boss can get a turn. It all depends on how you use the gauge system.

You can learn spells in the game from Mana eggs, and as you learn spells and levels you will learn new special moves too. If there is one gripe I have about Grandia’s leveling system is how freaking long it takes to gain levels and how freaking tough the bosses are. This is why the game takes 60+ hours to beat, because you have to spend hours upon hours leveling up, this was flaw that was later corrected by Grandia 2 in which leveling was easy, and so where the bosses.

But to be fair to Grandia, the game is twice as long as the sequel also because the story and the world is twice as big!

The Story in Grandia is a simple one at first, its about a boy named Justin, who wants to follow on his dad’s footsteps as an adventurer. His sidekick a younger girl named Sue is also into this adventuring gig, at first when you start playing in Parm you get the feel that they are just playing like normal kids play at pirates or at cop and robbers.

However, as the story progresses you can see that Justin is very serious about this and a fateful trip to some nearby ruins send the boy in a globe trotting quest to solve the mysteries of the Angelou Civilization and to find out if indeed his fathers memento a “Spirit Stone” is a true Spirit Stone. Unfortunately for him the Garlyle Empire is searching for spirit stones, and so the adventuring boy Justin is destined to face off against the mighty Garlyle forces. While the introduction to the plot seems stupid, and indeed when compared to FFVII’s Sci Fi tour de force it is, as you play things will get more serious and many shockers and twists await. There is even a tragic death scene that was played out almost in the way the FFVII “death scene” was played out, but obviously it didn’t came close to matching FFVII’s sentimental experience. But at least they tried.

The story is full of humor, and is light hearted. It is one of the better tales out there, if only the translation where as good, maybe then the game would have cracked my top ten. I would go on record by saying that the game has a very satisfying finale very long and very well done. It is not the Sci Fi thriller that FFVII is, and it is not the Fantasy romance masterpiece that FFIX is, but it’s a light hearted, very well told tale of a boy who went from dreaming in adventures to saving the world.

Grandia stands in my book as a classic that I recommend to all RPG fans to at least experience once. Unfortunately it is very difficult to find these days even in Game Stops and Ebs so you might have to look for it on Ebay, but it’s worthy of any trouble you may come across as it is a very satisfying adventure.

Gameplay: 7.0-The Best Battle System in the market, Yet difficulty pushes the score down.

Graphics: 9.0-As far as the 32- bit generation goes this is one of the most stunning looking RPGs.

Music: 8.0- Terrible voice acting. But the soundtrack is solid and some of the sadder tunes are great.

Story: 9.1-It is long and entertaining and it contains some interesting twists and shockers.

Addictiveness: 6.0-Not too much to explore but being that the game is long, it will keep you glued to the TV for at least 50 hours the first time through.

Overall: 9.2-A classic RPG that could have ranked higher had the translation and the leveling up system been better.