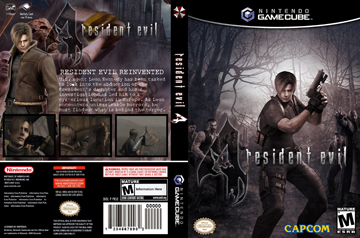 I was never a big fan of the Resident Evil games, I did finish Resident Evil 2 and RE: Code veronica, but even then, while I still consider RE: 2 a classic, the games were far from flawless. Graphically, the games always did the trick; I will never forget how awesome Code Veronica first looked when it was released on the Dreamcast.

However, the games had a big problem…the characters moved  slowly and in a robotic like manner which made it frustrating to aim, shoot and even to avoid the easiest of enemies in the game. Thanks to this control scheme (poor controls) the games were scary. Don’t get me wrong, RE1 and RE2 had some genuine scares, but I was mostly scared while playing them because I knew my characters were easy targets for the monsters in the game. Also, because there was a limited amount of ammo and health items to be found while playing. If you didn’t have to foresight to save some ammo, you could get pretty far in the game, only to get stuck on a boss fight with no choice but to start the game all over again.

So, in reality Capcom relied more on cheap tactics than on actual scares to ‘scare’ gamers out. Thus, I approached RE4 a little wary. Oh yeah, I had read that the game had unparalleled visuals and that the gameplay was completely redone, but I heard similar claims made for RE: Code Veronica, and it turned out that the game controlled and moved at the same pace of the PS1 Resident Evils in with full 3-D graphics.

Forget all you know about the Resident Evil series. If you hated the last 6 games of the series (I am counting the Gamecube remakes) you must play RE4, and if you loved the past RE games you still must play Resident Evil 4, even if it is completely different from the other games.

The Controls have been FIXED! Indeed, now it is easy and intuitive to move left and right, forward and back, something that was a big hurdle in past games. Now the game controls a lot like Metal Gear Solid for PS2, even though the camera follows Leon pretty much from his right side. When you shoot you are looking from a camera behind his right shoulder. It might sound tedious and weird now, but when you play it will quickly become second nature. Some Weapons have a scope so you can Zoom in and snipe a lot like you would in first person shooters. Leon can now run, crouch, and jump through windows. Aiming and evading enemies (even bosses) is now very easy. The way this game controls is a total and welcomed revolution for the series.

The Ammo and health items system has been FIXED! Yes, no longer will you have to save every last drop of ammo and health sprays. RE4 is about survival but it encourages you to rack up a bunch of kills on the way too! In this game dead enemies yield both Ammo and CASH! Yeah you heard it right, cash. The money can be used to buy more powerful weapons from conveniently located merchants across the game. You can also buy health spray bottles from merchants too. You don’t need ink ribbons to save anymore either. Another welcomed addition is the fact that you can upgrade your weapons, so the key to success is killing monsters and saving money to upgrade your shot gun and magnum.

Also while there is still limited storage in your attaché case, you can upgrade your case (even though it’s costly) in order to carry more items. Heading towards the last boss I had 9 spray bottles, a magnum, a shotgun, a Rifle, 2 hand grenades, and a rocket launcher. As you can guess I pretty much beat the living daylights out of it.

The ridiculous and stupid puzzles of past games have been FIXED! Yep, no longer must you collect stupid items in order to solve an even more stupid puzzle. Capcom has fixed this by eliminating most of them, and whatever puzzles the game has, are well done and in place. So, it won’t take long hours of thinking to figure them out, as RE4 wants you to focus on action. If you find a locked door, it means that you have to kill every thing and explore every thing in order to find the key or the emblem or what ever it is that you need to open it, so it never really becomes frustrating.

So, if the game is THAT easy how is it scary? Hold on Joe! The game isn’t that easy, this aren’t your daddy’s Zombies you know, this are angry possessed human beings you are fighting against. While they might look and moan like Zombies, they are not Zombies. These creatures move faster, speak (in spanish no less), and actually are pretty smart.

One of the villagers at the beginning of the game nailed me from like 10 yards away with an Axe on the head. Another Villager threw a lit dynamite candle at me, another fired a machine gun, and then there is the guy with the chain saw that takes an incredible amount of punishment before dying and can kill you in one swift blow.

Then there are the bosses, oh the bosses! Each boss is unique as in there are direfferent patterns to kill them, sort of like in the Zelda games. The bosses here are gigantic and lethal and yet, because the controls are so fine and you are armed to the teeth, you will be scared, but at the same time you won’t be frustrated, as you have the power in this game.

Then there is the shenmue like quick time moments were you have to press the correct buttons that appear on the screen or you will die, this can happen while taking a stroll through the forest, wiithin in-game cinemas and while fighting bosses.

Then there is Ashley, the girl you have to save, which adds a whole level of scariness to the gameplay since you have to be on your toes in order to keep her alive. She is the key to solving puzzles and to  beating the game (since it is game over once she dies).

The Story is scary as well, you play as Leon Kennedy from RE: 2, your mission now is to save the president’s daughter  – the aforementioned Ashley – who has been kidnapped by a mysterious entity and reportedly taken to a village in a remote area of Europe.

Once Leon arrives at the village he discovers that the Village people have gone mad, and won’t stop at anything to brutally murder him. From here on, the story features some interesting twists and shocks and there is even a special appearance by a character from RE:2.

The in-game cinemas are masterfully directed creating a sense of fear and drama unequalled by any other game in the market today.

This is also the most replayable game in the series. When you finish the game another quest will start with that special character I talked about earlier, and then there is the mercenaries game where you will have to try to beat your high scores by killing as many enemies as you can before the timer runs out.

The there is also the option of playing the game again from the beginning but this time with all of your weapons and special items intact!

The Audio has also received and uplift!!! RE4 is full of scary noises that make will make your heart race, every thing from water splashing to shot gun blasting, sounds like it should, and the voice acting is the best in the series!

Last, but certainly not least, are the amazing graphics…XBOX quality graphics on the Gamecube! Who needs the Xbox 360 when current systems are still capable of this. The character models are impeccable, the water effects are the best I seen in any game (not surprising since the gamecube has shown in other games a knack for doing great water visuals).

The bosses are towering, and their animation is flawless. The environments are sharp and photo realistic, until proven other wise RE4 will remain as Gamecube’s finest visual showcase. So impressive this game looks that I wonder whether the PS2 will be able to handle the port without some MAJOR sacrifices. 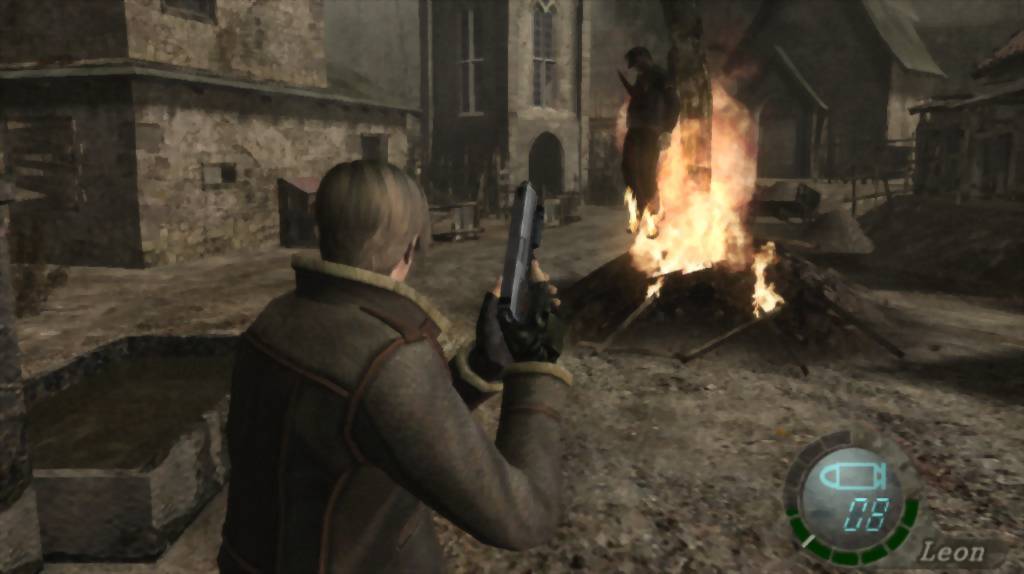 About the only thing they could have done better in this game, are the sky visuals. I am one of those people that like to look at the sky to see clouds and things of the sort, the clouds here are unimpressive, and it is shame that Capcom did not polish the sky box up considering that the rest of the visual package was flawless.

RE:4 is by far the greatest survival horror game on the market, and a true classic. Capcom’s finest hour, one of the best games of all time, RE:4 feels so good, and so perfect that one has to wonder why Capcom didn’t take the series in this direction sooner.

Gameplay: 10.0-Redefines the Genre, aiming and moving has never been easier in a survival horror title, plus the bosses are smart and the puzzles are simple.

Graphics: 10.0-The Gamecube can’t do better.

Music: 9.5-Good acting, great sound effects, eerie music, but the one tune when you get to the island seems out of place.

Story: 9.0-Standard RE fare, but feels more cinematic now thanks to the in-game scenes.

Addictiveness: 9.0-I am going trough it my second time right now, never before has a survival horror game compelled me enough to play it twice.