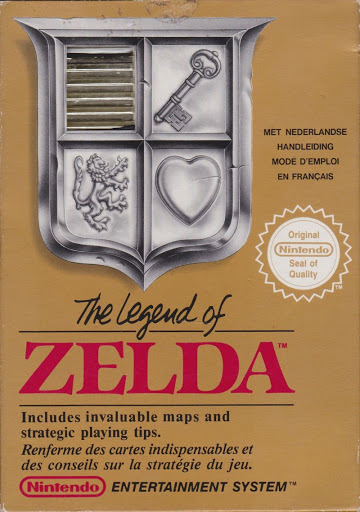 This was the game that began everything, not just the Zelda series, but everything. Every RPG, especially Action-RPGs that came after the original Legend of Zelda, took gameplay and level design ideas from it. In 1987 this game was nothing short of revolutionary, a lot like what Ocarina of Time was in 1998.

However I expect most action RPG and RPG fans in general, never got to play this game, and many of you would have never had the chance to, because these days it’s very hard to find a NES system that works properly and a copy of this lost classic. However Nintendo has finally answered our prayers and released a promotional disc featuring the two NES Zeldas and the N64 duet too, for the Gamecube.

First let me get this out of the way, The Legend of Zelda for the Gamecube, is NOT a remake, but a straight port from the original NES version. In other words there are no added bonuses, no updated graphics, etc. This is the Legend of Zelda exactly as it was in 1987. This is a good thing for RPG purists, but for those looking for a more eye pleasing experience than the original version it will be a slight disappointment. But when you get FOUR Zeldas in one disc for the price of one, and the fact that Ocarina of Time which is arguably the greatest game of all time is one of those four games included on the disc, makes this collection a must buy! (Note: You also get a pretty extensive Wind Waker Playable demo as an added bonus)

Graphically the Legend of Zelda is the equivalent of an old woman that was hot once in her younger years and age eventually took her beauty away. This game’s visuals are now simply out dated and ugly. In fact the whole game seems to be made of like 5 colors, this no doubt due to the NES limitations and to the fact that this was the FIRST Zelda ever made. The Gameboy Color Zeldas put this one to shame in this department. 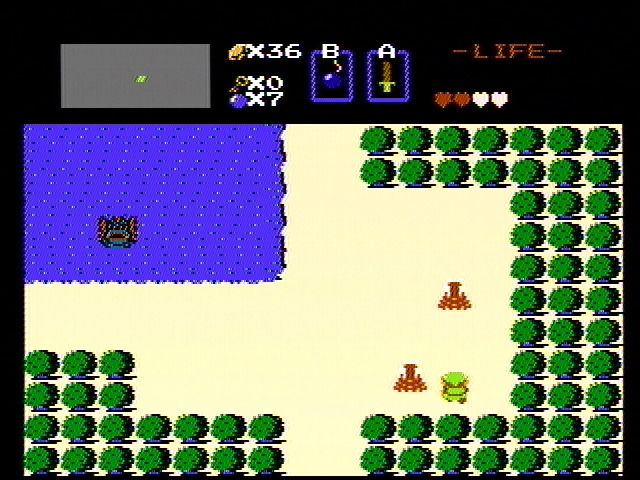 However even with the technology being this primitive Miyamoto managed to create a gigantic world in which each part was distinguishably different from the others. That Miyamoto managed to create, desserts, rocky mountains, waterfalls (one waterfall actually), Seas, lakes, forests, graveyards and in short Hyrule with a color pallette of about 6-8 colors is a testament to his level design genius.
Every thing you would expect in Hyrule is here from Death Mountain to the Forests, the one thing I never did found was the castle and the actual people of Hyrule.

As ugly as the game looks it’s hard to argue that this is pretty much the visual style that all other 2-D action RPGs followed after it and yes that even includes Alundra.

The Story, this where the legend of Zelda series has always fallen flat on its face and this was never more true than in the first Zelda. The plot is this: Princess Zelda is kidnapped by Ganondorf, you as Link are the chosen hero and must find all the shards of the Triforce of courage, by adventuring through eight dungeons after this you will posses the strength to beat Ganondorf and save the Princess and Hyrule, and then it ends. This paragraph is longer than the entire story in the game.

There are no plot twists, no cutscenes, in fact Hyrule is a deserted Kingdom for there are only shop owners that say “Buy somethin’ will ya” scattered through out the land. Oh yeah there are few old men in caves that provide mostly vague tips. Where is the castle? Where is the King’s army? Where is every body!?

Whoever wrote in the back of the promotional case that the Legend Of Zelda has a “Majestic Story” deserves a Majestic beat down for the statement. To say that Super Mario Bros has a better plot is an understatement. At least Mario came up with the whole princess gets kidnapped idea first.

To be fair to it though, the whole Triforce idea was born of this title, unfortunately nothing here has a background story to it…how did the Triforce came to be? How did Link came to be? Nothing is answered in this installment.

In the sound department the game does okay presenting us with the now legendary Zelda theme, the dungeon song is pretty much the same through out, a lot like the graphics in this game, you can count all the songs available pretty much in one hand. But the composer did a good job on the few tracks available, strangely they never get repetitive. The are many familiar sounds, like the triumphant noise that sounds when you find a key item, which has been trademark of the series, or the sounds of grabbing a ruppee, amazing that throughout 17 years those have not change. (Unfortunately the princess getting kidnapped hasn’t changed much in 17 years either.)

The Gameplay is where the Legend of Zelda still gets some points, in fact lets be honest. Zelda has never been so much about story as it has been about gameplay. In Zelda game play is king today and 17 years ago it was no different. This game introduced the concept of exploration with in a game world by hiding key items such as hearts, swords, magic wands, silver arrows, etc. Deep with in dungeons or in the overworld where you will have to burn bushes and bomb rocks to find caves to make your way into these hidden goodies.

The dungeons are well designed, for a game this old that is, as there are no puzzles to solve in them. To make up for the lack of puzzle Miyamoto and crew filled these dungeons with tons of enemies, enemies which get progressively harder to kill as you keep moving from dungeon to dungeon. Most of these smaller enemies require some type of strategy to easily defeat. Unfortunately the same cannot be said for the bosses…what a difference this game is from Ocarina of Time. I found that the best strategy for killing the bosses of this game is to ditch careful strategic planing in favor of running up to the boss mashing the attack button as fast as you can while using a potion bottle for good measure. This worked for me through the entire game, and that includes the pathetically easy Last Boss (provided you have the silver arrow of course).

Link has a wide array of items and weapons that will aide him in his quest, there are two shields, three swords (one of them which is hidden in the overworld map and you must find), a bow, arrows, a lader, different rings that allow you to sustain less damage when enemies hit you, boomerangs, magical rods etc. Definitely a nice variety of tools for a game this old.

In the end Zelda for Action RPGs is what Final Fantasy one was for traditional RPGs, No plot (Ok FF1 did have a plot), horribly bad graphics by even game boy color standards, but in the end it is the primitive gameplay that survived the test of time, and this game single handely created the action RPG genre. So yes it is worth playing today, if only to appreciate how far the Zelda games have come from the first Zelda.

Gameplay: 9.0-Today more like a 6. But this was the first time this kind of gameplay had been utilized so a nine in retrospective sounds like a fair score to me.

Graphics: 5.0- This the retro score today the game scores in this category a 0.5. Play Super Mario Bros 3 and you will realize that the NES could do much better than this.

Music: 7.0-A the lack of variety in tunes hurt the score.

Story: 1.0-That my friends is the retro score and I was being a tad generous today however the plot in this game fares slightly worst than the graphics.

Addictiveness: 6.0-Not much to do here once finished a second quest opens for the true masochists but since there is little on the way of plot, in this day an age when even Alundra 2 is more entertaining than this game, playing it twice would put you on top of the list of future inductees for your local mental clinic.

Overall: 7.0-The gameplay saved this game, yet the score in this department should be more on the 5’s but this IS a Zelda game and considering that series has only improved since this installment I decided to give it two more extra points to take it to the seven territory which makes it worthy of a play for those of you who haven’t experience it.

The Legend of Zelda Collector’s Edition for GameCube was rated a 95.

1 thought on “The Legend of Zelda (NES/GC) Review”