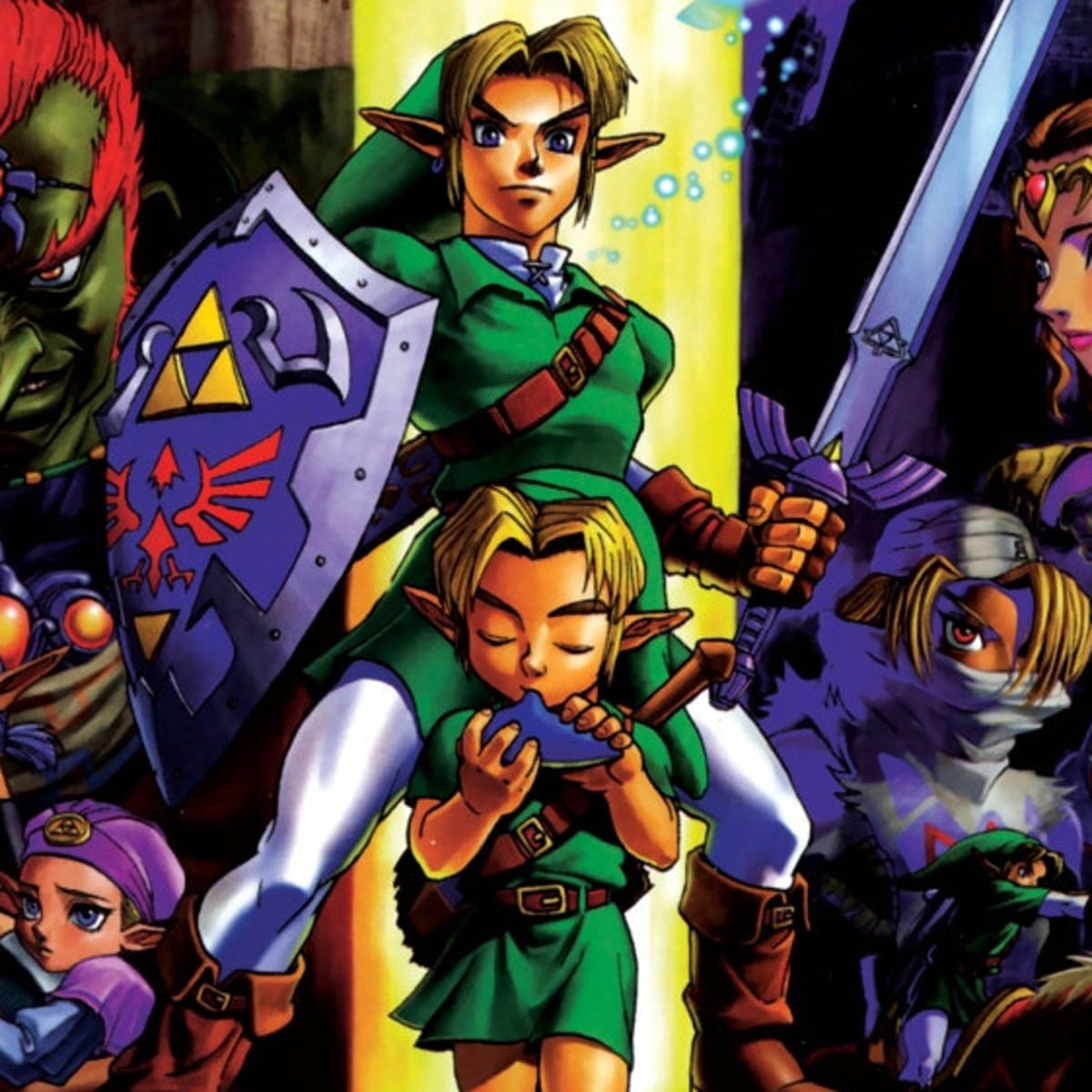 The Legend of Zelda: Ocarina of Time will turn 23 years old in just 3 days, and thus, there has been no better time to reminisce, and discuss, what perhaps is Zelda’s most important entry on this edition of Throwback Bit Thursday. The topic? The game’s story, and how Miyamoto (and Nintendo EAD) approached some of its finer points.

It is not a secret, that conventional story telling isn’t driving force behind the The Legend of Zelda series, as it has been a series that doesn’t tell a tale as much as it leaves up certain events up to its players’ speculation (imagination). Shigeru Miyamoto has always made The Legend of Zelda (and all of his games) about Gameplay and systems first and foremost, before engaging in any type of story telling details.

According to a decade old Iwata Asks interview, The Legend of Zelda: Ocarina of Time, was no different in this regard.

Osawa-san, the script director, made lots of suggestions to me saying, “How about a character that functions like this?” Koizumi-san and (Yoshiki) Haruhana-san quickly designed those characters’ visible forms, and I helped make them, too. So even when it comes to the Ocarina of Time, I hardly ever talked about the story. – Shigeru Miyamoto

The Legend of Zelda: Ocarina of Time Set a lot of Ground Work for the Series’ Lore and Storyline

It is strange to read about how ‘story’ was secondary (or even tertiary) to Miyamoto when it came to The Legend of Zelda: Ocarina of Time, as it was by far the most ‘story driven’ entry in the series to that point. Given the very basic nature of story telling in The Legend of Zelda, Adventure of Link, Link’s Awakening (though this one seemed more engrossing than the other 2-D Zeldas to me) and A Link to the Past; saying that Ocarina of Time is the one that tells the best story out of all of these games, isn’t saying much.

But, within what was expected from an Action-RPG (in the 1990s) whose protagonist had no dialog lines (Link is silent hero), Ocarina of Time did incredibly well in telling its story. The game set up what I still find to be the most likable NPC cast out of any game that I played in that era (or since).

The likable, and unforgettable NPCs were a by product of Miyamoto’s grand vision for the game, “But while making it (Ocarina of Time), I noticed that I didn’t want to tell a story so much as I wanted to have a lot of people appear around the main character and portray their relationships. Some years back, a television show called Twin Peaks was popular. When I saw that, the most interesting thing wasn’t the ins and outs of the story, but what kinds of characters appeared.” Miyamoto said, when asked by Iwata about how (even though Miyamoto always made games around functionality and gameplay) Ocarina differed from his other projects in terms of storytelling.

While Link never spoke a word, Ocarina of Time teased his relationship with girls around his age (and older) and it made for some interesting interpretations about who Link stayed with (after he was sent back from the future by Princess Zelda). A popular theory, given the job/class status of Link’s descendant in Twilight Princess (and the fact that him and Epona seemed inseparable in Majora’s Mask) is that Link finally settled down with Malon, after all was said and done.

Other theories are that he (eventually) married Princess Zelda (surprising, given Link’s lack of nobility status), and perhaps even more far fetched, that he had a love affair with Princess Ruto. Others, would speculate that he also had a thing for Nabooru.

While others have speculated that Saria was Link’s first crush, that relationship wouldn’t have gone very far because Link  aged, and Saria was destined to remain a child forever.

Still, Link’s womanizing ways make Cloud (Final Fantasy VII) seem like a shinning example of sainthood and celibacy. Not bad, for a guy that never speaks.

The fact that Ocarina of Time has birthed numerous fan fictions, many which focus on these women’s role in Link’s life, is a testament to Ocarina’s awesome character development. But, as it turns out, this (the importance of these girls/women) was also a by product of the game’s design,

When we decided to handle Link growing up from a 9-year-old child to a more mature 16-year-old, I wanted lots of characters to fulfill various roles. For example, Kaepora Gaebora is a grandfather figure who gives Link all kinds of advice and looks out for him. And since Link is a boy, I wanted girls besides Princess Zelda to show up. – Shigeru Miyamoto

Nearly every NPC within Ocarina of Time’s world is important to the quest. This dynamic is far truer with the game’s ladies, as they all had important story related, and main quest line participation during the course of the adventure.

The late Satoru Iwata put this effect on the story best:

(Eiji) Aonuma-san said the same thing. He said that while a lot of people say they like the epic story, on the level of the script, the story isn’t actually that epic. It feels epic because everything you experience within the game is added to the story. – Satoru Iwata

One of the best things that I remember about Ocarina of Time during my early days with the game in 1998 (I was 13-14) is how cool the transition from Childhood to Adulthood was when Link pulled the master sword from its pedestal at the Temple of Time. He must have been the coolest looking character that I had ever seen at the time, but he wasn’t always this way.

Early “Zelda 64” shots portrayed Link as a squatty, weird looking elvish kid (more in line with previous Zelda games) rather than the taller, and some would say ‘DiCaprio’ anime inspired character design that the designers finally settled for.

For those too young to remember, 1997’s Titanic (film) was a huge global hit, and Leonardo DiCaprio (protagonist) was the most popular young actor around thanks to it. Nintendo has been hushed about whether or not, DiCaprio was specifically used as a reference, but a comment by the game’s illustrator, shed some light into this:

“At that time, if you were to talk about a really good-looking actor, people immediately thought of this guy. So I recall keeping in mind the point of his nose and that strong-willed look in his eyes when I was drawing.” -Yusuke Nakano

Nakano stopped short at mentioning the actor’s name, after all, lawsuits and legal issues are a real thing as Nintendo knows (they are masters at it). Still, it is clear that no one was bigger than DiCaprio at around that period of time, and the resemblance is almost uncanny. 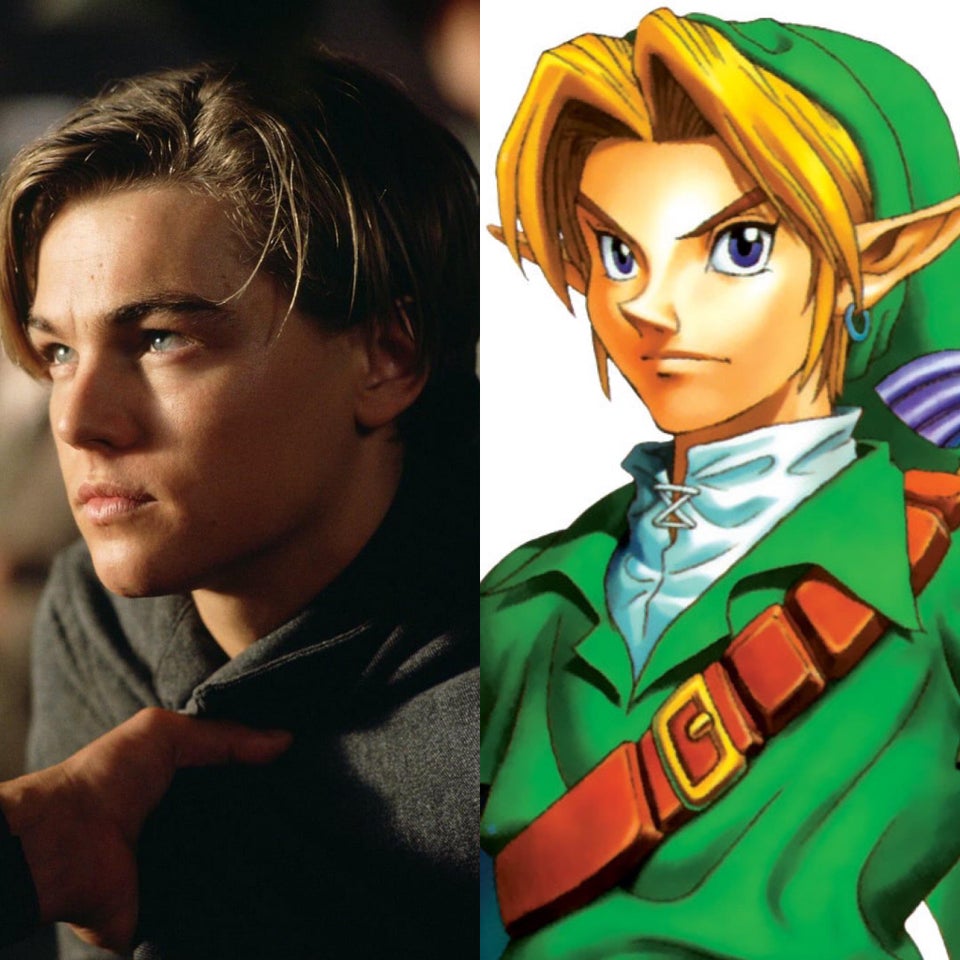 That said, in Iwata’s interview, Yoshiaki Koizumi (designer), revealed a few other interesting bits about Link’s design, “My wife said, “All of Nintendo’s characters have funny noses. Don’t you have any handsome ones?” I was shocked.” Koizumi said when discussing Link’s nose change for his final version. “Then when we were making The Legend of Zelda: Ocarina of Time, I was in charge of Link’s character design, so I made him a little better-looking.” He finalized.

But, Eiji Aonuma (The Legend of Zelda’s current Director) probed further in what had turned into a jovial fun conversation, “So Link is your wife’s type?” To which Koizumi replied with a firm, “Yes”.

So, it seems that the world has Koizumi’s wife and her comment about Nintendo characters being ugly (sorry Mario) to thank for Link’s heroic and handsome good looks.

While the entire thing might seem funny today, it is interesting to see how important it was for Nintendo to make Link a likable character on his first 3-D appearance. Every part of his design, from his nose, to the earrings that he wore as an adult, was carefully thought out.

The Legend of Zelda: Ocarina of Time’s (and the Series as a Whole) Strength….

…is that it leaves a lot of stuff open for interpretation. Due to that fact, The Legend of Zelda is a fertile ground for awesome fan factions (we have a few on our site), and for monumentally elaborate discussions about how the series’ entries should be arranged in chronological order.

Even with the existence of The Legend of Zelda: Hyrule Historia (a book that contains an “official” timeline of the series’ events) discussions about the order continue to arise. There are reasons for this, and Miyamoto addressed the issue during Iwata’s interview:

The stories in The Legend of Zelda may not match up as the series progresses. We actually expend a lot of time trying to make them match up, though. It would make things a lot easier if the players said, “Oh, that doesn’t really matter.” – Shigeru Miyamoto

This is a very strange statement by Miyamoto in the sense that he claims that he (and Nintendo) have spent time trying to make the games match up, but that maybe this was done after the fact (the first 3-4 entries) rather than planned all along.

Miyamoto would later admit, that he, and the development team made a conscious effort in trying to make Ocarina of Time fit with past Zeldas’ own lore and storylines in its development cycle, but that he would have preferred The Legend of Zelda (as a series) to follow the less “complex” path of his Super Mario series.

Even though the setting (for old school cartoons like Popeye) was different each time, the characters you knew and loved would come out and perform. Well, the Mario games are set up like that. It would be much easier if we could use any setting in The Legend of Zelda while preserving the essential relationship between Link, Ganon and Zelda. – Shigeru Miyamoto

Thankfully, as a Zelda fan, I am glad that the series didn’t follow the Mario blueprint.

23 Years Later, Ocarina of Time Remains My Favorite Game of All Time 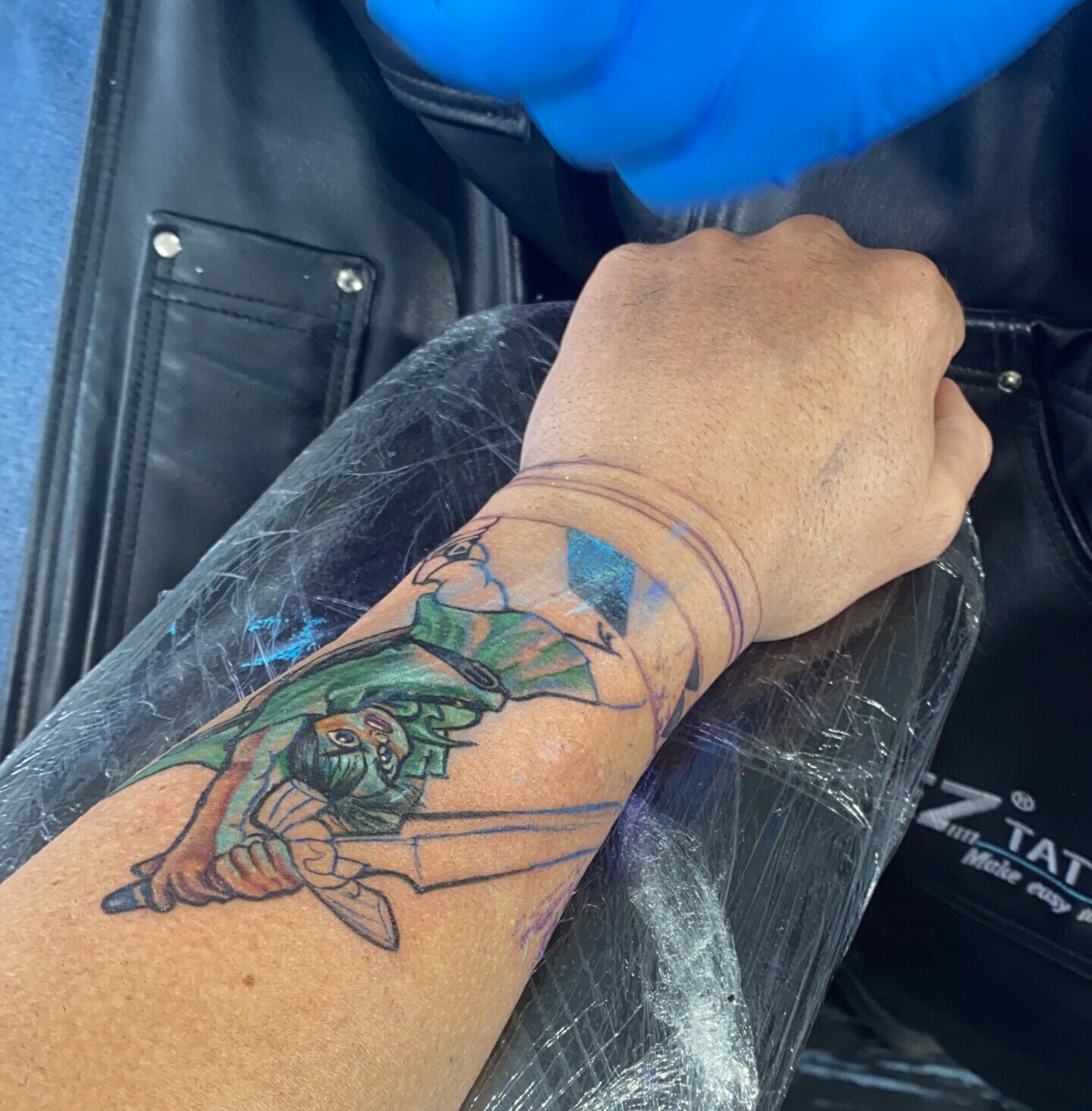 For all the progress that gaming has made since Ocarina of Time, I have yet to find a game that is much better right now, or even close to being as good (at the time of release). My love affair with The Legend of Zelda: Ocarina of Time will last until the day that I die. While that last sentence might have sounded a bit over dramatic, it stands true, and I have even made sure that it does (hold true) by starting the process of an Ocarina of Time themed tattooed sleeve (see image above).

As with marriage, I have a made an “Until death do us part” commitment with this game. That’s how highly I have always thought of it.

Finally, Shigeru Miyamoto, a man who whose resume can easily make up a top ten of the greatest ever made, admitted that Ocarina of Time is special, even amongst his greatest creations:

In terms of having done new things with this game, I felt a very strong feeling that I only feel on a certain number of games that I’m involved in. And I was really happy that we here in Japan could make a medieval tale of sword and sorcery liked by the people of the world. Despite using a historical drama at Toei Kyoto Studio Park as reference! (laughs) It was received well overseas.

On that note, happy 23 anniversary The Legend of Zelda: Ocarina of Time! You are the greatest game that I have ever played!