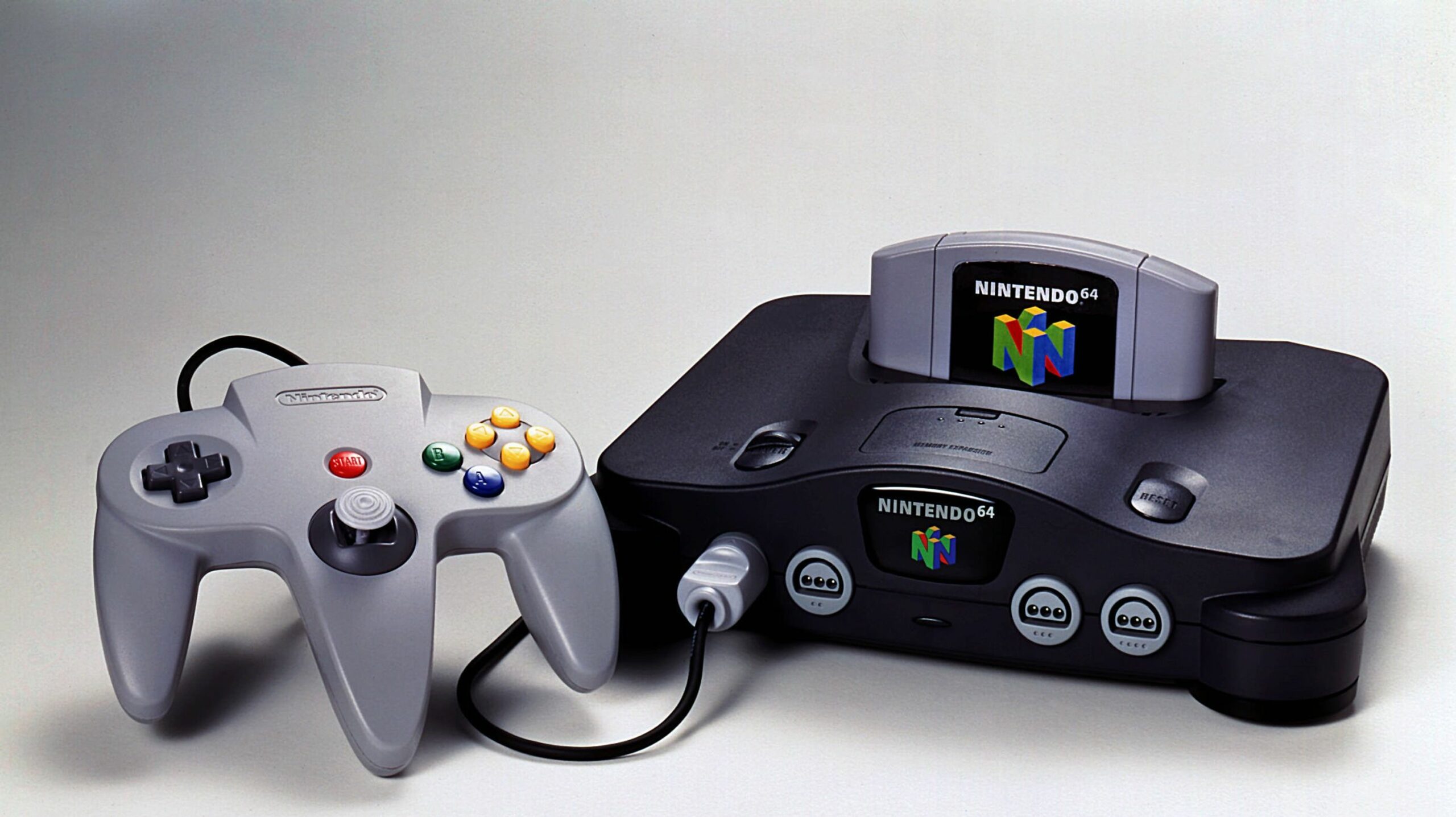 It might seem crazy, but this week the Nintendo 64 turned 25 years old, marking an important milestone for one of the most influential consoles in gaming history. Today’s edition of Throwback Bit Thursday presents a perfect occasion for me to remember what is, perhaps, my favorite console ever.

A Child with Dreams and a Vivid Imagination

At 11 years of age, my imagination was peaking. The transition in gaming from 2-D to 3-D that took place in the mid 90s was a fertile ground for my young and impresionable mind to run ramptant. No magazine screenshots were more magical than early 1996 shots from Super Mario 64.

You see, at that time, I owned a PlayStation. Games like Descent, and Tekken were in my library, and while they were great games (at the time), they did not posses that true 3-D ‘magical feel’ that Mario 64 oozed, even in still screenshots.

Game companies in the 1990s  would use ‘Bits’ as a marketing tool when referencing their machine’s power for bragging rights. Nintendo was smart in naming its system the ‘Nintendo 64’, as the ‘64’ number marked a clear hardware advantge over Sony’s and Sega’s 32-Bit Machines.

Was the Nintendo 64 twice as powerful as the PlayStation? On paper it was, maybe even a bit more than that when CPU and RAM (with the eventual RAM Pak) were compared directly.

The use of Cartridges, however, handicapped the system. This allowed for PS1 games to have more varied (though pixelated) textures, better sound, and full motion videos.

Still, Super Mario 64 would turn into a revelation the moment it launched. The game made the system a ‘must buy’ for 3-D enthusiasts. Little 11-12 year old me must have spent dozens, if not hundreds, of hours enthralled in the magical world that Mario 64 offered.

In my mind there were no limits, nothing had come close to matching Super Mario 64’s greatness in my previous 6 years of gaming ( and I had played many NES, GEN, SNES, and some PS1 titles).

Chief among the reasons (for losing the market to Sony) was the use of cartridges, and the consequential exodus of 3rd parties that used to work for Nintendo systems to Sony’s greener pastures.

Still, this about what the Nintendo 64 meant for me as a kid, and I have to say that I didn’t have issues with waiting months in between big AAA (mostly Nintendo and Rare) releases.

First of all, I was 12 in 1997. My buying power was nearly ‘0’. In order to buy games, I relied on my mom’s good will, and on whether one of my uncles and aunts needed a fence or wall painted, as these ventures would turn into my very first ‘paid’ gigs.

Second, Nintendo 64 games were prohibitively expensive early on. Games, like Star Wars: Shadows of the Empire could easily cost $79.99 which is, roughly,  the equivalent of spending $137 dollars on a game today.

And Third, Super Mario 64 was so good, that I really did not need to play any other game until Star Fox 64 came around. I was too immersed in Mario’s first 3-D adventure to look elsewhere.

Occasionally on weekends, I would rent Star Wars: Shadows of the Empire (Ironically, my very first play through of Mario 64 also came by way of renting it). Even though the game (Shadows of the Empire) was average, the few good stages that it had made it a must play for me, as I was in love with the Nintendo 64 and its 3-D rendering capabilities.

The same can be said for Turok: Dinosaur Hunter, which was a favorite of mine. Honestly, I never felt short changed by owning a Nintendo 64. Consequently, my PS collected dust throughout most of 1997. I just did not find PlayStation games enticing enough for me after experiencing the N64’s 3-D rendering greatness.

But Then, Final Fantasy VII and JRPGs Happened

If I had to guess which console I spent more playtime during the 90s, the Nintendo 64 would come out on top. It would be a close match with the PlayStation, however, thanks to the latter system’s massive JRPG library.

Yes, I played a lot of Tekken 1-3, Crash Bandicoot, Ace Combat, and Gran Turismo 2, but the playtime burned in those games combined didn’t rival the amount of hours that I had spent on Super Mario 64 and Golden Eye alone.

However, Final Fantasy VII and several other RPGs like Wild Arms would spark a lasting obssesion within me with the genre. I did buy and played every PS1 RPG that I could find from 97-2002.  My PS1 would stop collecting dust after FFVII, but even then, the Nintendo 64 remained my most played system.

I can write an article commenting on the joys of experiencing the rumble pak for the first time on the wonderful Star Fox 64 in 1997. Or on how (even today) WCW/NWO Revenge remains my favorite wrestling game. However, as we come to the closing moments of todays article, there is no other N64 game worthier of greater praise in my memories than The Legend of Zelda: Ocarina of Time.

By late 1998, My mom and I had moved to the U.S. and games were cheaper (than in Puerto Rico, and an Electronics Boutique store was located at a mall near me). I was able to build up a vast library of JRPGs on PS1.

The Nintendo 64 was my primary gaming machine when not playing JRPGs. However, another Super Mario 64 ‘like’ experience was missing. At that point, I truly wondered if any game would ever impact me as much.

The mighty FFVII had conquered me thanks to its storytelling and audio/visual presentation, but it wasn’t a mindblowing experience like Mario 64 had been.

“Perhaps, I have just gotten a bit older, more tech saavy, no game can impress me anymore…” These were my thoughts at the time.

Thankfully, I was wrong. Nintendo, coupled with Shigeru Minamoto’s genius, would once again capture my imagination with Zelda’s first 3-D entry: The Legend of Zelda: Ocarina of Time.

No magazine article, or TV commercial could have prepared me for what I witnessed the moment that my N64 first booted up Ocarina of Time on my TV. Ocarina of Time was as close as you could get to living in a real-breathing virtual world in 1998.

The visuals were perfect. Its game world and NPCs were teeming with life. It was the first game that I could point at some distant landmark, such as the Volcano in Death Mountain, and actually make my way there.

Younger gamers will take this for granted today, but there is no proper way to describe what it felt to be able to do that in 1998. For me, Ocarina was magical, epic, and engrossing in ways that even Final Fantasy VII hadn’t been a year before it. It was the greatest game/experience that I had ever played up to that point, and it wasn’t close. Only Super Mario 64 had pulled off a similar feat in matching the sense of wonder that I felt while playing Ocarina.

I must have spent at least 8 months consistently playing to find everything. In these sessions I even learned most of the game’s tricks and bugs. I would find myself years later during the PS3/360 era going back to my N64 just to play Ocarina again. There hasn’t been a game that I have played (or loved) more than Ocarina over the last 22 years.

Ocarina has been rated as the Greatest Game of All Time by many since its release, and I would agree with that sentiment. No game since (or after) has captured my imagination (and time) in the same way that Ocarina of Time did.

The N64 introduced, and made 4 player split screen gaming a popular thing. Being that I was an ‘only child’, and only during the months of summer would I  travel to visit my family (and play with my cousins). My memories of the N64 are mostly solo affairs.

That said, I do have plenty of memories of the days when I did play with cousins and friends. It must be stated that the Nintendo 64 was far and away a better machine than the PlayStation in that regard.

The fact that we would still dig out the N64 some 15 odd years later to make a pause on COD: MW2, and Halo: Reach in order to play Mario Party 2 is all that you need to know about what an amazing party machine the Nintendo 64 was.

Closing Thoughts on the Nintendo 64

So yes, in terms of numbers, I played more PlayStation games than I did N64 ones. However, in terms of entertainment, memories and just the sheer amount of hours that I spent on gaming, Nintendo’s 64-bit machine remains the king.

In the rare times that I have been asked to compare the two systems (PS1 and the N64), I have always tried to summarize it into these few sentences:

“The PlayStation had a wider more varied line up of good games across different genres, including the great traditional JRPGs of the era. But, the Nintendo 64 had the best, more groundbreaking, and memorable experiences. If had to choose only one…I wouldn’t trade playing Super Mario 64 in 1996, and the once in a lifetime experience of walking into Hyrule’s Field for the very first time as the sun sunk into the horizon in 1998 for anything in the world.”

In conclusion, even though I objectively rated the Nintendo 64 as the 4th greatest Console of all Time, personally, I still feel that it is the best. No game on other game console holds dearer and fonder memories for me.

Twenty five (nearly 23 for Ocarina) years have passed, and it still feels like it was just yesterday that I first woke up in Kokiri Forest at the frantic call of a stubborn fairy. The Nintendo 64 was that special.