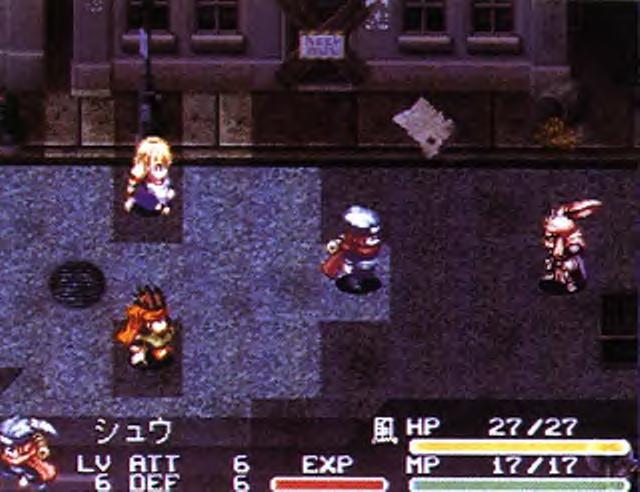 Less than five months after the release of Arc the Lad, Arc the Lad II hit stores in Japan. It was a continuation of Arc the Lad’s less than stellar gameplay and storyline. If you are an avid reader of the site, you know that the first game, had plenty of woes hindering it.

The first game had no character development to speak of, it was too short (8 hours) and looked like it was stuck in the SNES era when it was a PS1 RPG. Arc the Lad II solves at least one of these issues; namely the length of the game. So did Arc the Lad II save the ‘Arc The lad Collection` package? (My review of Arc The Lad: Twilight Spirits is here.)

Rumor has it that Arc the Lad I and II were originally planned to be a SINGLE game. The first game’s length and the fact that Arc 2 looks just as ‘OLD’ as Arc 1 seems to prove the rumor true.

Arc 2 has  much more variety of locales, as now there are hand drawn maps for every country in the game. However, the 2 dimensional game stills looks identical to its predecessor, and it definitely looks behind the times even when compared to some 2-D games from SNES-Sega CD era.

The problem the game has is that there is an inconsistency in the artwork itself, while some areas are original looking others are simply bland. While the first game could pass for a strategy RPG, Arc 2 plays like a traditional one, and as a Traditional RPG the game is lacking even if for a game made in 1995.

The CG scenes which at the time were the strong selling point of the game, do their job but when compared to Squaresofts PS1 stuff in that department, the CG scenes ugly looking!

It has a better variety of tunes than the first game; however, most are recycled. Andoh again does well, but still doesn’t get anywhere near ‘spectacular’, but truth be told after 51 hours of playtime the music while forgettable never became particularly annoying, which is a positive thing to say.

The sound effects are okay and the Japanese voiceovers during the battles sound ok, again nothing spectacular, the game’s presentation is on the basic side of things.

Most play Japanese RPG’s for their plots, and Arc the Lad 2 is a continuation of the first game’s plot, but mostly through the eyes of Elc, a ‘hunter’ (a mercenary) who has a troubled past, and embarks on a quest to destroy the Romalian Empire, while trying to save his beloved Mariel.

The addition of Elc brings in a new set of secondary characters with their own backgrounds, this extends the game’s plot while at the same time adds too much to a story that already has TOO MUCH going in it.

Too many villains, too much backtracking, too many characters and no one ever rises above the rest to make the story interesting.  After 20 hours I lost complete interest in the story and only managed to pull through to the very end because I had to write the review.

The way the game ends, however, makes it clear that Arc the Lad shot for ‘FFVI like’ drama greatness and fell flat on its face for all its troubles. There is NO character development, NONE and in a game that lasts 50 plus hours that is a DEAL breaker.

If the game wasn’t clichéd beyond relief, perhaps it would have held my attention to some degree, but alas everything that happens here I have seen before in better games.

On a positive note when Arc the Lad II ends, it ENDS! There is no cliffhanger, so I suspect Arc the Lad III has totally new story and perhaps a new setting, which can only be a good thing (Let’s cross our fingers!).

Arc the Lad II plays like Arc 1, sans the addition of dungeons and traditional style Towns. These two additions make the game for all intent and purposes a Traditional RPG possessing a strategy RPG battle system.

The Battle system is good, but the length of the battles and the frequency of them make an otherwise bearable game, UNBEARABLE. Needless to say the final battle takes about 3 hours to complete and that’s unacceptable.

“WHY!?” was the question I constantly asked myself as I battled through that dreadful final confrontation, what’s the point of making a 3 hour long battle? More importantly what was the point in playing through the 51 hour quest? The battles are just too long, because it seems as if the enemies level up according to your level. This feature at the time was probably an original addition to the genre (later used in FFVIII), but like in FFVIII, it was rather an annoyance.

G-Craft is the original culprit of this (as they made the game), but Working Designs had the power to undo this travesty and yet they didn’t do a thing about it, needless to say I am very disillusioned with the  master publisher.

There are plenty of side quests in the game most notably the ‘hunter jobs’ that you can partake in the various guilds scattered throughout the world. At first I found this a refreshing side diversion, but it wasn’t long before I lost interest in it, and considering how long the game turned out to be, it was perhaps the greatest thing that ever happened to me, because had I taken the time to finish the jobs I would still be playing the game as I write this review.

Arc I and Arc 2 have been throughout disappointments, so two thirds of the collection have managed to fail miserably and now it is up to Arc 3 to redeem the whole thing.  Arc the Lad the Collection regardless of how I rate the third game is a must have for RPG collectors, but so far it is definitely NOT a must play.

Gameplay: 5.0 — The battle system works as it did in the first game. However the length and frequency of the battles make the fights a frustrating and dreadful affair. There are some long dungeons, and even a clever section with some surprisingly good puzzle solving elements, but other than that, the dungeons and the towns are just as bland, and as dreadful as everything else.

Music: 8.0 — Remains the best aspect of the game, but the longevity of the playthrough eventually makes the music a forgettable aspect of it, almost as forgettable as the story.

Story: 4.0 — Dozens of characters, plenty of villains, NO character development, and you get a story that is both predictable and boring. In the end you get a failed attempt at unseating FFVI as the king of that mid nineties era.

Addictiveness: 3.0 — I know for a fact that after finishing this dreadful title I WILL NEVER, EVER, PLAY IT AGAIN.

Overall: 4.0 — A Mediocre RPG, just like the first one, but in the end it scores lower because the first game at least had the foresight of clocking at 8 hours, this one went to 51 hours and those are 51 hours  of terrible, and I must stress the word ‘TERRIBLE’ RPG gaming.