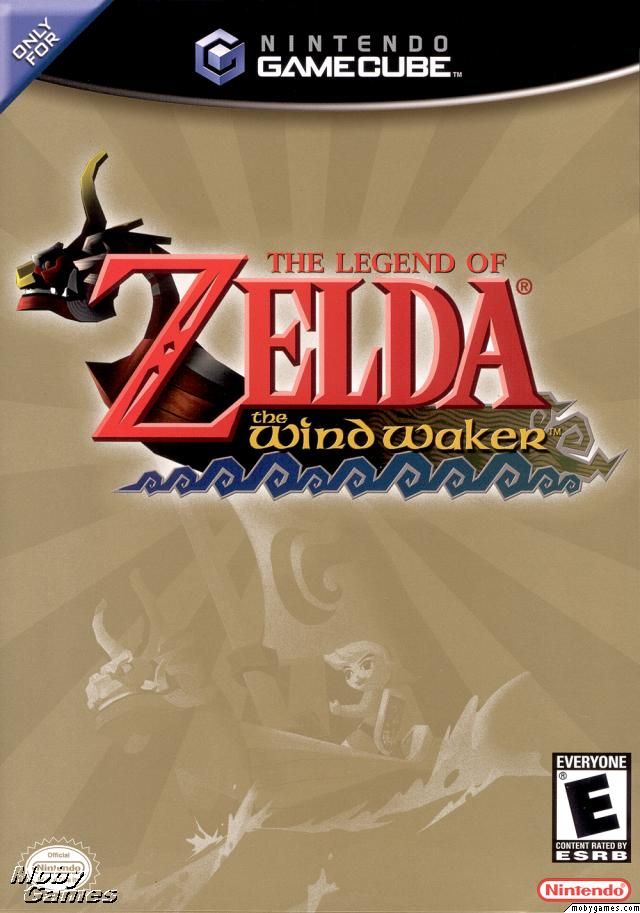 This newest Legend of Zelda, has probably been the most controversial one and because of this I approached this game differently than I had approached any other of its predecessors. I can blame my lack of enthusiasm on the misconceptions I had on the Cel- Shaded look. However once I started playing I realized that maybe on this particular title cel-shading works best. The Wind Waker is the best Zelda since Ocarina of Time, Yet Ocarina it’s still the king.

Graphically the Wind Waker blows away any game on the genre in what artistic design is concerned. If someone asks me which is the best looking RPG I have played, the Wind Waker will certainly be in the top three, yet I feel that I have seen more technically impressive games before such as Skies Of Arcadia and Ocarina of Time on their time. Instead of exploiting Game Cube’s visual capabilities, the Wind Waker does more to exploit the Game Cube’s scope capabilities. Simple I bet you part of the reason why Miyamoto went for cel-shading instead of a more realistic look was that this game’s world was too huge to keep it running smoothly in full polygonal three dimensional glory. The same goes for the enemies and the people that you meet during your quest, their animation and their movements are fluid something that would have been impossible to accomplish in such detail if the graphics were realistic. In battles for example, were now there is no slowdown at all the framerate would have dropped. Another reason for Nintendo to go this style probably was that they wanted the player to experience something new and fresh, which it is. I will admit I was one of the louder skeptics when Miyamoto took this visual direction and I would like to apologize I believe Wind Waker’s graphics fit the game’s theme perfectly. And rest assured the graphical artistry in this game is unrivaled. Everything from Link to the seagulls has been beautifully animated. 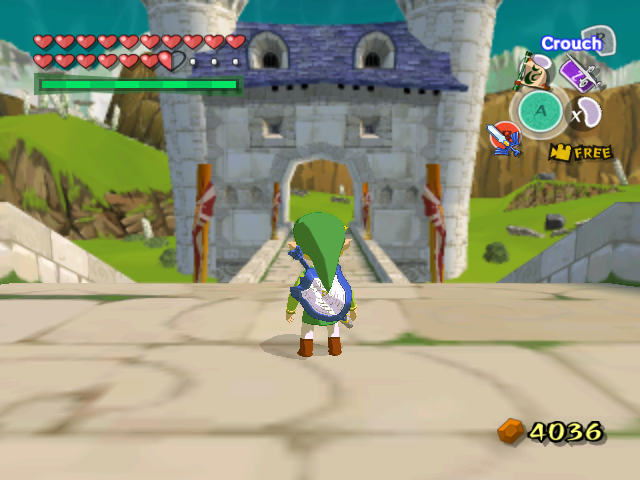 Story wise Wind Waker is hard to rate. The story starts out brilliantly. With Link celebrating his birthday and being dressed in the traditional elfin green clothes. Then everything turns into a nightmare when his sister is mistaken with Tetra (a young pirate girl) and is kidnapped by a giant bird. While at first look this introduction might sound silly, it’s very well written and trust me from here on, the narrative gets really good. Things get interesting when you learn that the bird only kidnaps girls with ‘pointy’ ears like Link’s sister and Tetra. The Pacing and the translation are excellent. I found myself playing more to know what would happen next in the story than playing for the gameplay which is strange since Zelda even at it’s best in Ocarina had never been exactly a literary achievement. Yet the story builds itself so well that one point I was thinking that maybe Nintendo had gotten it right and that the Wind Waker could surpass Ocarina on the strength of it’s story. Yet my hopes were let down because at about halfway point in the game the big shocker (which I will not spoil here) was unleashed upon me. What a tremendous shocker it was so good and unexpected that it sent shivers through my spine, it was undoubtedly the climax of the game. The problem was like I said before it happened with half of the game still left to play. Now do not get me wrong I had no problem with the timing in which this plot event was unleashed. What I have a problem with is the fact that the plot came crashing down into a slow and predictable manner afterwards which drags into the uninspired ending which by comparison to the beginning of the story pales. Simply put the ending did not met the expectations I had formed on my mind after that great discovery in the middle of the game. The ending was predictable and felt rushed. Wind Waker has the best Narrative in the series for about half of the game then it destroys itself. Ocarina to me was better for it was more consistent.

Musically the game is on par with the other games. Infact I can say there was more variety on this game than on any of the others. For example there is music every where even when you hit an enemy there is a musical sound for it which builds suspense in the fights. The Wind Waker songs though fall just short of the quality of the Ocarina songs in Ocarina of Time. Yet Koji Kondo has another masterpiece soundtrack under his belt.

Gameplay wise this Zelda mirrors the N64 ones in every possible way. Z-targeting is still the way to battle which is perfect for I think that this is the best way to fight in this type of game. I never truly experienced any type of camera problems. With brings me to the new added ‘free’ camera which you control with the ‘C’ stick, and can zoom in and out at your leisure just as it can rotate around Link allowing you to get a better look at your surroundings. Also there are new additions to Link’s repertoire of moves such as ‘crouch’ and ‘sidle. And finally the addition of a new item called the grappling hook and the ability to pick up an enemy’s weapon.

The battles are like I said before identical to those found in Ocarina and Majora’s except for a new parry attack feature which works by Z-targeting an enemy and waiting for the ‘A’ button to flash and pressing it exactly at the right time. The game’s dungeons are well designed, but I found them to be too easy and predictable, and while they are huge in appearance I felt that they were short because I finished them pretty quickly. There is only one major problem with the dungeons and that is that there aren’t enough of them. Only seven, Which brings me to my next complaint. Once you get to the climax that I was talking about earlier, you take on two more dungeons before you learn that you must get the eight triforce shards that are buried somewhere on the sea. Now it would have been nice if instead of eight you had four pieces and four more dungeons that you had to complete in order to get them. Yet Nintendo decided to abuse the sailing feature of the game by forcing you to sail to the islands to get them. But not before sailing to different islands to get the charts and sailing to back to tingle island to get the Maps deciphered. In other words it’s time consuming and after a couple of hours of seeing the seemly endless blue sea and sailing back and forth between places you will get sick of sailing and will curse the day Miyamoto and his team decided that sailing was ‘fun’. Of course there is a warp song that helps somewhat but that still doesn’t save sailing from becoming a burden.

In what minigames are concerned this Zelda has the most of them, there is one at practically every corner you turn into. This gives the game the longest replay value a Zelda has ever had, in ocarina you only collected hearts and skullkutas. In Wind Waker you collect everything from pictures to hearts to necklaces to flowers etc. In fact after you finish the game once there is an option for a second quest which it’s very tempting until you realize you don’t want to sail ever again after collecting the eight tri-force shards. On a sad gameplay note I am truly disappointed at the fact that Link can’t go underwater on this game and at the fact that even though the gameworld is covered by 90 percent water there is no fishing game!?

The Wind Waker is a must own and quite possible the best Zelda after the still undisputed Action-RPG king: Ocarina of Time. Even with the disappointing conclusion of the story and the tedious long sailing stretches, Wind Waker is a full-fledged Zelda title and a true sequel to Ocarina of Time that no gamer should miss.

Gameplay: 9.8-Typical Zelda masterful gameplay, but where is the fishing game? Why can’t I go swiming underwater? Sailing get’s annoying

Graphics: 10.0-Artistic design in this beast is unmatched.

Music: 8.9-weaker than in previous Zelda games, Koji Kondo must be sliping.

Story: 9.0-The best ever in a Zelda game for half a game… then it destroys itself.

Addictiveness: 9.5-Where is the fishing game!? But on a good note there are lots of things to collect.

Overall: 9.0-Might be the best Zelda since Ocarina, even though Majora is pretty close.

Metacritic rated The Legend of Zelda: Wind Waker a 69.